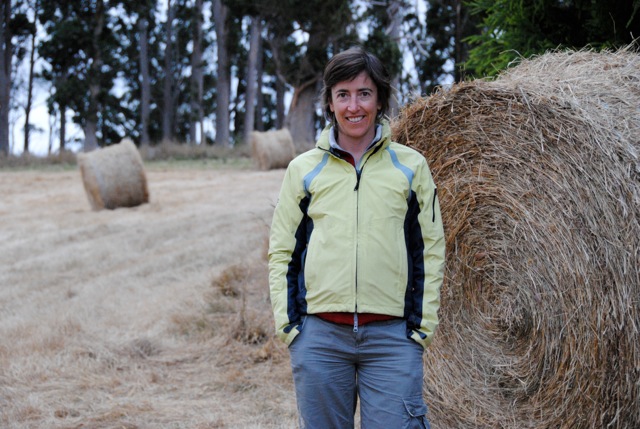 A founding member of a grassroots community group working to inspire a strong and healthy future for our community is soon to leave her much loved neighbourhood of Newport. Kate Leslie, founding member of Transition Hobsons Bay, is now transiting herself to the western district of Victoria, where she and her partner, Jason, will be building their own straw bale house and setting up an organic herb farm on a cooperative community setting.

Kate’s interest in sustainable living grew out her desire to move away from carbon polluting fossil fuels, especially as she learnt about peak oil production and the impact this has on communities that continue to rely on a declining non-renewable resource. Whilst Kate is keenly interested in renewable energy and systems to support a clean and healthy physical environment, her passion extends to the inequity of the current fossil fuel driven systems that will displace and disadvantage communities that have a high reliance on a declining energy source.

To help grow a Transition Group in her local community, Kate applied to Hobsons Bay City Council to see if they knew of anyone interested in making a change toward a low-carbon, socially-just and healthier community. Kate was put in contact with other like-minded community members, who then collectively decided to hold their first meeting in February 2010. Transition Hobsons Bay or THB as it is colloquially known, has been meeting regularly ever since and currently has around 460 Facebook group members.

The philosophy of the group is based on Transition themes, where we need to move to more sustainable energy systems to live harmoniously. Transition Groups are also about making connections in a community, encouraging people to engage with problems and solutions, to develop shared action, and to strengthened relationships. As Kate describes, “who wouldn’t want to meet up with fun and motivated people.” The meetings are all about an exchange of ideas, where members develop solutions to local opportunities; they share foods and skills and have a good time.

The Transition Movement has many key themes and philosophies, and these are often incorporated into the monthly meetings in Hobsons Bay. Some of the regular sayings include: it only takes 2 people to create an event; the right people always come; and, go where the energy is.

The group has no official affiliations and is fluid in what projects and initiatives it explores, with many individual members involved in other community groups and activities outside of Hobsons Bay. The group’s key themes are around transition and permaculture, and group members have been involved in activating projects, such as, food swaps, a local trading scheme, a community garden space, compost shares, community celebrations, discussion groups, pot-luck dinners and working groups.

The meetings have typically been held in people’s homes and are on the 1st Tuesday of the month at 7.30pm. All the information about the group is available on the THB website transitionhb.weebly.com and other information can be found on facebook.com/groups/transitionhb/

Kate’s involvement in developing a more sustainable Hobsons Bay includes her involvement in setting up many of the food swaps in the area, including the Newport, Altona and Williamstown Food Swaps. Kate also ran a skill share group called Fermenting Fridays that explored a different fermentation process each month. Traditional cultures have associated fermented foods with good health and this was a great way for people to not only learn new skills and recipes, but to make friends and have some fun.

Over the past five and half years, Kate has been sharing her vision for a more sustainable future through her involvement with THB; she has been visionary, as well as practical and hands on, often typing the meeting minutes, grant writing, door knocking, etc. Her passion was acknowledged in 2013 when she received a Hobsons Bay City Council Inspirational Women Award for her significant community involvement.

Kate’s contribution has made the local community a richer and more connected place. One of her legacies in Hobsons Bay will be the establishment of a community group who are motivated to create a better world. As Kate describes, “before THB, we really didn’t know each other, but now we do, and we have a space for us all to meet.”