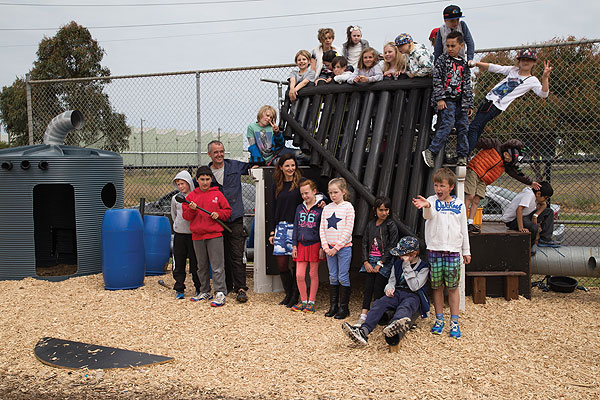 The pupils of Spotswood Primary have a wonderful new addition to their school. A working musical playground. The playground is the brainchild of local artist Dave Murphy, who has a child at the school.

Dave wanted to be more involved with the school and thought the wide open space of the school grounds could do with more in it. He also knew there would be an opportunity for a grant to help with the funding of the project through Creative Victoria.

After contacting the Spotswood Headmaster Jackie Green, they together put in an application which was accepted, allowing the project to go ahead.

Dave has a musical background, as well as being involved with the creation of instruments for musical groups over the last twenty five years. He had an ongoing association with the “The Black Arm Band”, a well known indigenous musical group. He made them “bush drum kits” on several different occasions.

This experience, as well as making instruments out of bits and bobs for a parade band he had with some friends, gave him a good platform from which to embark on making the playground at the school.

The playground itself has a strong percussion element, which makes it very easy for the kids to jump on and bang around. It also has wind instruments, a harp and some stretched wire cable that makes interesting sounds when struck with sticks that are tethered to the installation. The cable runs from end to end, through several different cubbies, that have instruments inside and around them.

The standout instrument is the “Thongophone”, a large organ like contraption made of different sized plastic pipes with thongs tied to the top of it for hitting to generate various sounds.

Dave wanted the playground to give the children an easy creative outlet that is readily accessible, and a chance to “jam” together that they do not get so often when they are doing their music lessons.

Next time you are in the area, if you hear a strange song on the wind, it might just be some of the Spotswood kids, banging out a tune on their musical playground.