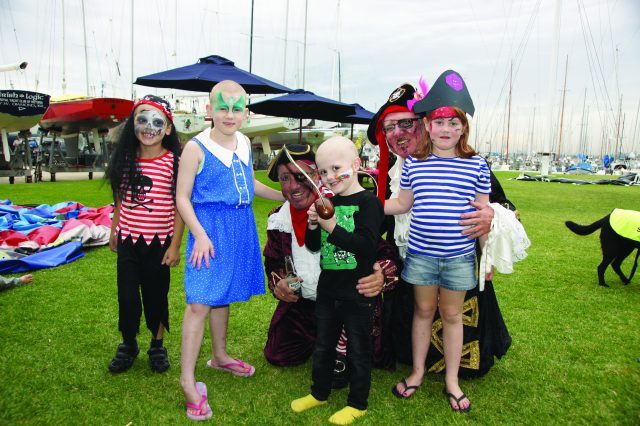 Shimmering sunlight dances over gentle waves on Melbourne’s Port Phillip Bay as a ferry full of excited kids dressed as pirates sets sail from the Royal Yacht Club of Victoria in Williamstown.

Before long a second boat flying the skull and crossbones – crewed by scary, eye-patched Rotarians cunningly disguised as dastardly Black Beards and Captain Hooks – pulls alongside them.

It’s on for young and old as the kids mercilessly bombard them with water balloons.

You guessed it. The kids win, then sail home triumphantly to claim their treasure and goodies and celebrate on a bouncing castle back ashore.

The other big winner is Rotary.

District 9800’s Rotary Club of Point Gellibrand – a boutique club of just 25 members – has been running its Pirates’ Day for kids with cancer and the Challenge Cancer group for 10 years or more.

For a club whose attendance can drop to just a dozen or more in winter this energetic crew of Rotarians punches well above its weight … whether running the iconic Jalna Big Bay Swim from Port Melbourne to Williamstown, serving up a Pink Ribbon Breakfast for 160 women, or cooking for 70 kids at risk at Rotary’s Camp Getaway in Axedale near Bendigo (Vic) every year.

The annual Pirates’ Day in March was launched by club member Mick Trezise, a Williamstown charter boat skipper and long-time supporter of the Challenge Cancer group. He’s also head cook at Rotary’s Camp Getaway in Victoria every November, when Point Gellibrand Rotarians host a youth leadership weekend for dozens of kids from Melbourne’s West, many of them from the Sudan or Somalia.

Richard McKay (aka Captain Chaos), another past president of this busy club, regularly hosts a dads’ weekend for fathers of young cancer victims at his Murray River property in Mathoura, NSW. Then the dads go on a stress-busting fishing trip on Mick Trezise’s boat Vortex.

The Gellibabies – as Point Gellibrand Rotarians are known – celebrate their 30th birthday next year. Several members are already in their 70s or 80s, but the club has a young president in Stephen Los, 31, and five female members.

Stephen, who runs a graphic arts studio in Footscray, was recently invited to join the club after donating time to update its website, and increase its social media presence. He saw the benefits of joining Rotary, and before he knew it was (cajoled and) elected club president.

Stephen says: “Rotary International has re-branded well and lots of Rotary clubs need to follow suit (re-inventing themselves) to appeal to the broader community.

“Activist groups with single causes are popping up everywhere but Rotary gets better results because it’s more efficient overall per hours of members’ input”.

The Rotary Club of Point Gellibrand meets for dinner 7pm every Tuesday at the picturesque Royal Yacht Club of Victoria in Nelson Place, Williamstown, a short drive from Melbourne’s CBD.  New members welcome.

ROTARIANS IN FOOTSCRAY MAKING A DIFFERENCE IN THE HORN OF AFRICA

NEW LIBRARY IN THE VILLAGE