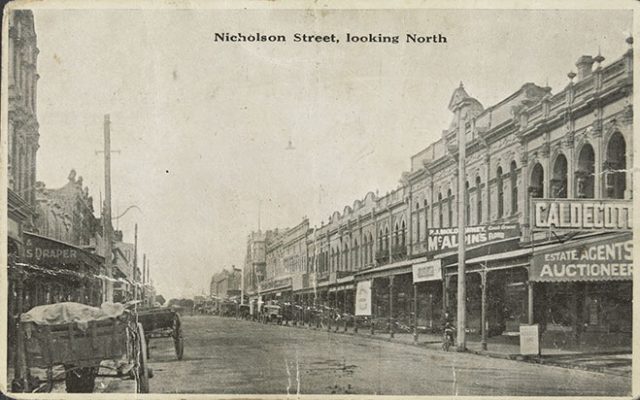 Deadly, highly infectious virus. Lockdown and widespread social disruption. No, not COVID-19, but last century’s devastating Spanish flu. Was there something to glean from the pandemic that struck in 1919? I went looking, only to discover the inner-west’s finest hour.

Scientists believe the scourge that swept the globe after World War One, which resulted in more deaths than both World Wars combined, was carried to Australian shores by soldiers returning from war torn Europe.

The Coronavirus and Spanish influenza might feign flu-like symptoms, but that’s where the comparison ends. In his illuminating book ‘The History of Footscray’, John Lack describes how the Spanish flu progressed:‘… fainting, fits, vomiting, diarrhea, abdominal pains and delirium indicated pneumonic influenza. The onset was explosive and could be dramatic.’ And if ever there were a sullen statistic, it’s this: last century’s influenza was most deadly to those aged 20 to 40 years of age.

This was the scenario facing our horse-and-buggy neighbours of yesteryear. Minus the comprehensive health system and safety net for the disadvantaged.

Governments in a fledgling nation had witnessed the tragic human cost overseas, so authorities decided to lockdown. NSW cast federation fervour aside and closed its border to Victoria.

‘The State is in the grip of a deadly plague,’ read a Footscray Advertiser headline February 1919. Unqualified as they were, municipalities were called upon to look after their own. Just as the Royal Exhibition Building was transformed into an emergency ward, so too Footscray Technical School, now Victoria University, was turned into Footscray Emergency Influenza Hospital.

Just as well. The sick were falling ‘like ninepins’ with the most serious cases being tended to in these converted classrooms.

While there was no cure, pneumonic complications seemed the main cause of death, so a program of inoculation was set in motion. More than eight thousand from the surrounding district would eventually be vaccinated, some at Footscray Mechanics Institute, which still operates as a tiny library.

School start was postponed, entertainment events were curtailed, public meetings of more than twenty prohibited and travel in long-distance trains restricted. Milling around under the clocks at Flinders Street Station was forbidden.

Surgical masks became commonplace, and Sunday church services were held outdoors. Hotels within 15 miles of Melbourne’s GPO were told to close their doors; instead, orders were telephoned through to pubs and bottled beer delivered.

It may not have been called social distancing, but limiting interaction was the first line of defence against an invisible enemy even a century ago. Not that there was any shortage of home remedies. There was a dearth of Bovril, claimed the manufacturer, a beef paste that could wrestle ‘the influenza fiend’ after ‘he has invaded our system’.

What a relief it must have been when the contagion seemed to wane.

Sadly, the break was short lived. A catastrophic March flood turned Barkly and Nicholson Streets into rivers. Timber houses in Seddon were carried away down the hill. The community was still reeling when in April a second wave of influenza hit — only weeks after the impromptu hospital had closed its doors.

Like a stone thrown into a pond, the toll spread. By May, four months after Victoria had been declared an infected area, apparently tireless doctors were exhausted. The wheels of industry were grinding slower.

Women in the district rallied with help for struggling households. Remember this was a time before Facebook groups. Still, Yarraville women were so organised that the working class suburb was divided into sections and allotted captains, whose teams searched streets for distressed families, sometimes displayed by S.O.S. placards outside of homes. Some sewed caps, gowns and masks. Others helped in laundry and soup kitchen tents.

Grim times, made worse by a prolonged strike on the docks, would bring out the best in the community and produce heroes.

We cheer on the AFLW Bulldogs at Whitten Oval in a grandstand named after John Gent, who was Town Clerk during the pandemic. He was instrumental in establishing the emergency hospital, stepping up when State Health authorities disappointed.

‘Mr Hoadley’s hospital’ was how locals affectionately referred to the Footscray emergency unit. Intrepid Arch Hoadley went from school principal to hospital superintendent in the early months
of 1919.

A statue of Baptist pastor Joseph Goble stands near Footscray Primary School in Geelong Rd where mourners once stood in thousands to grieve his passing. The selfless man of God distributed aid with humility during a pandemic that saw returned soldiers near starvation.

‘Footscray’s middle class of shopkeepers, contractors and industrialists, notably their wives, bustled about on good works in 1919 under the supervision of Gent, Hoadley and Goble,’ notes John Lack.

The pandemic ended early October after a third wave hit mid-year. Three and a half thousand Victorians finally succumbed to an influenza with a mortality rate of one percent. And while 83 deaths seemed a heavy burden for Footscray, it was considered low for an industrial centre dotted with crowded factory floors.

The community that had been tested by the outbreak was now fuming at the perceived disregard of lawmakers across the Yarra.

Rumblings over the lack of a public hospital in an industrial district turned into a roar that would deliver Footscray Hospital in Eleanor Street. Albeit, three decades later.

As we currently write our own history, it’s comforting to remember the sun did emerge from behind dark clouds.

As early as the mid-1920s, an industrial town once scorned as ‘Stinking Footscray’ would now be called, ‘the soundest of all Melbourne’s surrounding suburbs’.