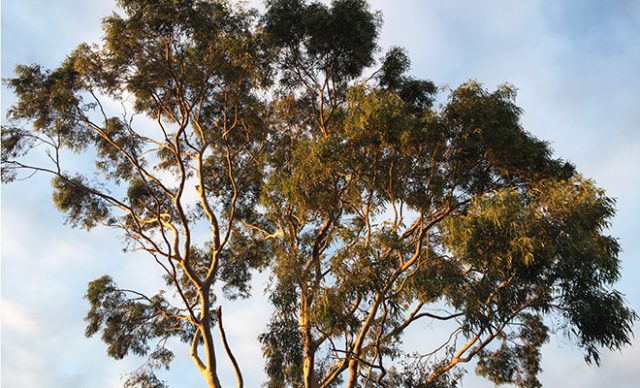 An official-looking letter came from the council in summer last year and I was rapt because it wasn’t the rates. And then I was even happier, because the letter informed me that here, on our humble suburban block, was a potentially significant tree. It had been nominated – by a friend, a neighbour, a passer-by – and was one of 180 to be considered, under strict criteria, for a register that would help protect our “natural and cultural heritage”.

The letter didn’t specify which tree, so I speculated. The cheerful Tahitian lime, bought in a fit of restless grief after my mother died and that showers me with gin-and-tonic garnishes for half the year? The flowering gum, the living measuring stick for our first-born? Once, they were both saplings. He’s now 188 cm, and the tree neatly screens out a two-storey development.

But of course, I knew the tree they meant. The lemon-scented gum, slender and graceful, unmissable from blocks away.

Excited, I made an appointment to have the tree appraised and welcomed the arborists on a blowsy, tail-end-of-summer day. They didn’t disappoint. There was both khaki and a floppy hat in evidence and they had the open warmth of people who spend their days with trees. Politely declining water, coffee or a pre-lunch Negroni, they patted the dog and I left them to their work while I made a coffee.

No sooner had I pulled a long black than they were done appraising and measuring but as they left, I sensed a tightness in their smiles. “Do you think,” I asked, “the tree will turn out to be significant?”

It’s a beautiful tree, they observed brightly, managing my expectations like mad. It wasn’t really their call, they cautioned. Wait to hear from council: they’ll be in touch. But maybe, ummm … it’s a little small?

Too small to be significant. Does that mean it is insignificant?

I took my coffee outside and sat in a patch of dappled light under my potentially insignificant tree, my favourite thinking spot.

When we moved in more than two decades ago with a couple of kids in tow, we sought the opinion of an arborist who warned us of the tendency for large eucalypts to drop branches. We all stared up at the tree: he declared it a keeper.

During renovations, we added a curved window at the back that captured a wedge of sky and the lemon-scented gum’s waving branches, like an ever-changing painting: the tree’s beauty is built into the very bones of our home. Pets – a ditzy dog, a noble long-haired tabby – take their eternal nap in graves among the undergrowth. As summer runs out of steam each year, screeching cockatoos arrive by the dozen carrying green walnuts stolen from a nearby tree, and for weeks it rains empty shells and full nuts, dropping like bombs out of disappointed beaks.

Early this year, I received another letter and it was official: our tree had missed the cut for the draft Significant Tree Registry. Eighty trees on private land had, it seems, made the list. It was a nice letter, full of interesting information including the fact that the tree was probably 55 – 65 years old. When I was taking my first baby steps in our bare backyard in Altona more than half a century ago, this tree was probably already making shade, stretching its roots in the clay soil of Yarraville.

But it was too small to meet the “strict criteria” which is, apparently, based on the National Trust Significant Tree Register according to the council website. Which is fair enough.

Not long after our tree was appraised back in 2019, we had a barbecue. I stood with our friend Michael in the soft evening shade admiring the lemon-scented gum. I told him that it was potentially insignificant. Or, okay, probably not significant in an official sense.

I told him about the pets buried below and the raven’s nest perched so high that on ferociously windy days, I’d watch mesmerised, certain it would come tumbling down. I told him about the rush of bright rainbow lorikeets that could spend weeks feasting on its flowers. And I even told him what I loved most: on cool autumn mornings after rain, the tree stood supernaturally still, drenching the whole world in sweet, deep, calming scent.

“How did they measure the tree’s significance?” he asked. I hadn’t seen them do it, I confessed, but I was reassured by the amount of equipment they were carrying.

“They seemed diligent”, I shrugged. “There were tools.” Above us, clouds of fragrant leaves rustled.

“Ah” he said. “There’s your problem,” he said, passing me his Prosecco to hold. “They didn’t measure it the right way”. He clambered through the clumps of herbs, past the archaeological ruins of a fairy garden and the overgrown pet cemetery, right up to the trunk. And he wrapped his arms tightly around it, his face pressed into the smooth bark.

And I thought: he’s right.

For information about the City of Maribyrnong’s Significant Tree Register visit www.maribyrnong.vic.gov.au