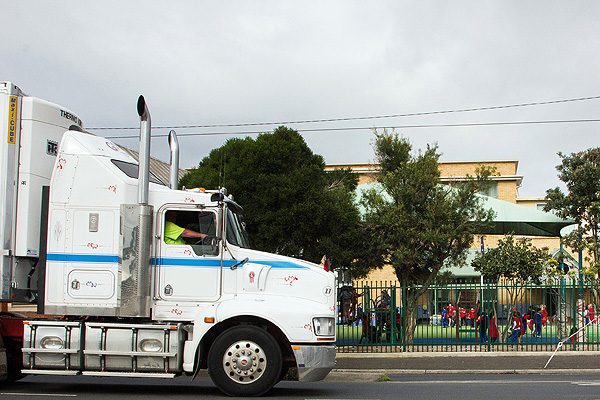 Community groups come and go, it’s the nature of unfunded organisations like the Maribyrnong Truck Action Group (MTAG). But what’s remarkable about MTAG is our longevity; we’ve been at it now for almost ten years. That’s a really long slog fighting a community battle. Our issue is trucks, trucks that use our residential streets to service the Port of Melbourne.

We’re not just talking about a few thousand of trucks, but over five million trucks every year! They impact on our air quality, sleep, safety and health. The vast majority of these trucks aren’t here delivering goods. They are simply cutting through our community, often avoiding tolls.

MTAG started in 2005 following the footsteps of the YRTG (Yarraville Residents Traffic Group). The YRTG had some early successes’ with community protests that lead to the introduction of night and weekend curfews on Francis Street and Somerville Road in 2001 and 2002. I should know, I was there and have personally clocked up around 13 years of campaigning on the truck issue.

Why would you spend so many years doing this I hear you ask? I moved to Yarraville in late 1992 after living bayside. I had a basic knowledge that Yarraville was close to industrial areas and the port. I guessed I’d get used to my new surroundings and the trucks. But the trucks just kept coming, going from a background issue to one that really started to concern me. I didn’t just start to notice the trucks more; the number of trucks increased year after year after year. I was a stay-at-home dad, out and about every day with my kids. Using local streets like Somerville Road became really frightening. Cycling took this experience to a frightening new level with massive container trucks barely a metre from me.

I started thinking, why are the trucks on local streets? Shouldn’t they use Geelong Road, Westgate Freeway or City Link, roads designed for large trucks? I began researching, what I found was alarming. Diesel exhaust was thought to be a possible carcinogen with potential to impact most on children.

I soon discovered the YRTG and went from a concerned citizen to an active member campaigning for change. The YRTG went in hard, organising protests to get our issue noticed. I’d never blocked a road before, it’s an intimidating experience!

The YRTG burnt out but made an invaluable contribution to the introduction of curfews on Francis Street and Somerville Road. Not a shabby effort when you consider comments from Premier Bracks who said at the time “You don’t have to live there” – referring to local residents!

MTAG began soon after the YRTG’s demise, and  I was soon pulled  in. I was in love with the west, and this vibrant, friendly community became my home. My family was putting down roots and making amazing friendships, but I also wanted safer streets and clean air. Despite not actually living on a main road, I was close enough to hear the trucks, notice the black dust on my window ledges and notice so many kids with asthma.

Melbourne’s transport debates are always interesting, everyone has an opinion. A classic example was the debate on the proposed East West link leading up to November’s state election. Our transport issue here in the inner west is unique though. Our transport issue is our health. The diesel exhaust from more than 21,000 trucks every day is actually making us sick.

Look at the statistics. Maribyrnong has asthma rates more than 50% above state averages. We also have the state’s highest hospital admission rates for children with respiratory ailments. These stats are scary, we should be concerned and anything but complacent. Just because the trucks were here does not make it okay.

If those stats didn’t get you thinking, here are two more. Victorian EPA monitoring on Francis Street found the highest levels of diesel pollution ever measured on a residential street. And to compliment that, in 2014 Yarraville’s truck issue made Environmental Justice Australia’s top 10 list of air pollution hotspots in Australia. That’s in the entire country folks!

The World Health Organisation says this about diesel exhaust: It is a Class 1 carcinogen, in the same group as asbestos, formaldehyde, plutonium, tobacco smoke and mustard gas. They state, “ There is no safe level of exposure to diesel exhaust.”

Despite the science and medical research, our reality is still tens of thousands of trucks rumbling past our homes, schools and kindergartens every day. Often the trucks are just metres from our children at school. It’s unacceptable from a social justice perspective that we pay for Melbourne’s freight movements with our health.

Both sides of politics now acknowledge the problem. Labor went to the recent state election with a pledge to build the West Gate Distributor. This project is estimated to remove around a million trucks per year from our residential streets by providing a purpose-built truck bypass through industrial areas. MTAG welcomes these plans, but along with the community, are waiting to see details of the project. Appropriate truck routes are a win not just for the community but also for the freight industry.

This January saw the introduction of two new truck curfews. Somerville Road now has school crossing time curfews. With three schools and a kindergarten in close proximity, thousands of kids are now benefiting from cleaner air and safer streets. Parents are telling us that the change is incredible.The other curfew is on Moore Street in Footscray which had experienced a 400% increase in trucks since 2006. New curfews ban trucks at night and weekends.

If you don’t think blockading roads achieves anything, MTAG’s last two protest actions were on Moore Street and Somerville Road. Speaking up for your community and demanding better outcomes works. I feel proud to be a part of this achievement.

Are the new curfews enough in the short term? Wembley Primary School kids need school time curfews. Williamstown Road and Buckley Street residents need curfews. And what about extreme noise levels the EPA measured in exceedance of what is considered detrimental to human health?

We have a simple wish here in the inner west; we want to stop fearing that living in our incredible, vibrant multicultural community may actually be killing us.

TIPS AND TOOLS FOR A HEALTHIER LIFE…WOMEN IN SCIENCE