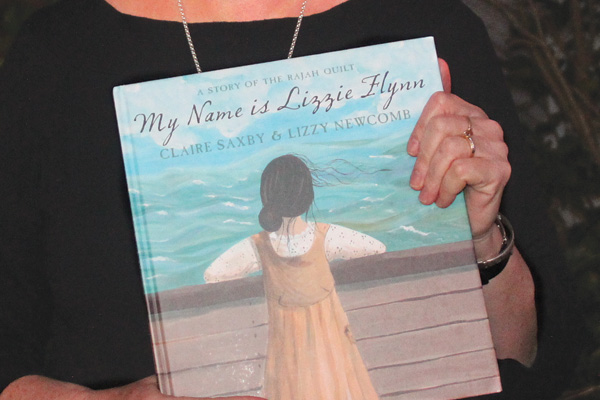 Claire Saxby began writing about fifteen years ago, ten years after moving to Newport with her family. After several years of juggling writing and community health work, she became a full-time writer. Since then she has written and published poetry for adults and for children, fiction and non-fiction books for young readers.

‘My Name is Lizzie Flynn’ imagines the story of a thirteen year-old convict girl aboard the Rajah en route to Australia in 1841. It also tells a story of the making of the ‘Rajah Quilt’, one of Australia’s most important textiles. This quilt, now held by the National Gallery in Canberra, was constructed aboard the Rajah by between 20 and 50 women.

Claire’s research began about three years ago when she first discovered the ‘Rajah Quilt’. A number of people, particularly quilters, had heard of it but few knew many details, so she travelled to Canberra to view the quilt in the Special Collections Room and to talk to conservators there. She also travelled to Brisbane to see the fragile quilt on display as part of an exhibition of historic quilts.

While in Sydney, she spent time below deck on ships trying to understand what it would be like to be part of a ‘convict cargo’ on a sailing ship. Online databases offered lists of the convict women, their ages, crimes and sentences. She created a fictional character based on a real convict girl, borrowed a crime and sentence from another convict and then invented her journey.

Picture books are a bit like icebergs – only a few hundred words will make it into the final manuscript. But every one of the many, many hours of research is necessary if the story is to be believable. Once complete, and accepted by Black Dog Books, Sydney artist Lizzy Newcomb began work on the illustrations.

During Claire’s research, she discovered that this story had links to Williamstown. Captain Charles Ferguson, captain of the Rajah, met his future wife aboard. Kezia Hayter was a young free woman travelling to Van Diemen’s Land to assess conditions in women’s prisons. It is believed she supervised the construction of the ‘Rajah Quilt’. Some years later, the Ferguson family moved to Williamstown where Captain Ferguson became Harbourmaster. The family were very active in the local community, helping to establish the fire service, militia brigade, and committees for a wide range of church and social endeavours. So influential were they, that one of Williamstown’s main streets is named for them.

Claire will be speaking about ‘My Name is Lizzie Flynn’ at Williamstown Library at 6.30 pm on Wednesday 19 August as a guest of the Loom Room.