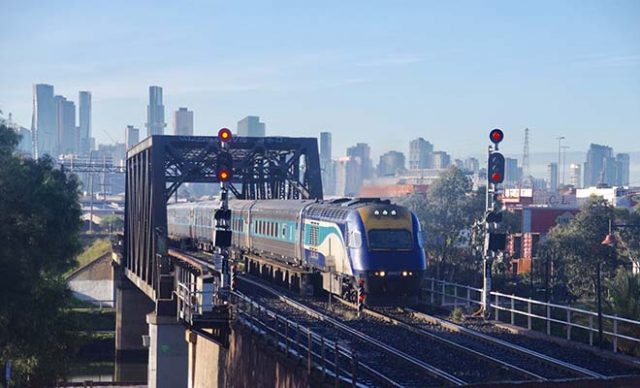 Have you ever wandered past the Bunbury St tunnel in Footscray and wondered if it’s still used, and if so, what for?   The tunnel is vital for interstate passenger trains transporting thousands of passengers each year, and interstate and regional freight trains transporting goods worth millions of dollars to Victoria’s domestic and export economy annually.  While the tunnel has its quiet times, it is used by 20 to 30 passenger and freight trains each day heading to and from Southern Cross Station, the Dynon rail freight terminals or the Port of Melbourne.

Passenger trains using the tunnel comprise V/Line’s three times per day Albury services in each direction, NSW Trains XPT that operates twice daily to and from Sydney and Journey Beyond’s Overland service that operates twice per week between Melbourne and Adelaide.

Interstate freight trains through the tunnel go to and from the rail freight terminals (Dynon and South Dynon) adjacent to Dynon Road in West Melbourne.  These trains transport a wide variety of goods including furniture, car parts, tyres, machinery, chemicals, parcel post, groceries, clothing, building materials, cement, steel and other commodities.  Grain trains from regional Victoria and southern NSW also operate through the tunnel to the Emerald grain export terminal at the Port of Melbourne and to Allied Pinnacle’s mill in Kensington for grain to be processed for domestic use.  Each freight train through the tunnel removes between 50 and 150 trucks from inner west roads, depending on the train’s length.

Regional container trains also use the tunnel to get to and from the port.  These trains transport export containers of regional commodities (hay, grain, rice, potatoes, meat, dairy, paper products, ingots, wine, grapes, cotton and pulses [legumes etc]) from terminals in Victoria and southern NSW.

There are also other rail operations through the tunnel such as trains shunting in and out of the South Dynon terminal and transfer movements between freight terminals.

The Bunbury St tunnel is a critical link in Victoria’s supply chains for domestic and export markets.  Next time you’re strolling along the river near the tunnel or having a picnic in the grounds of the nearby Arts Centre and a freight train goes by you are seeing a vital part of Victoria’s economy at work!

A SLOW TRAIN THROUGH MOROCCO