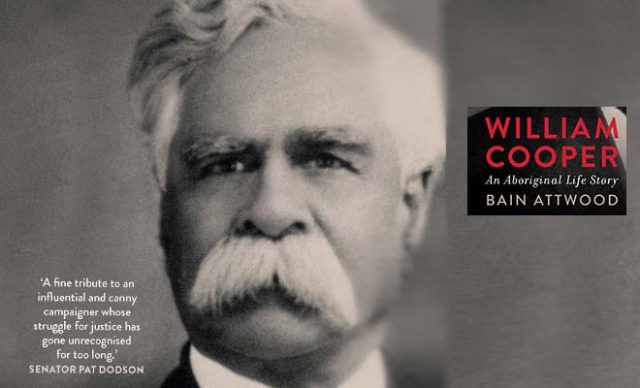 First order of business for Prime Minister-elect Albanese in his victory speech was to acknowledge Traditional Owners.  Appearing to be holding back a sea of emotion, he glared into a crowd of boisterous true believers and continued: ‘And on behalf of the Australian Labor Party, I commit to the Uluru Statement from the Heart in FULL.’

Was that a rumble from beneath the ground?  In an address that will be remembered long after it was delivered, this was a striking moment.  One that might give pause to consider the journey to get here — answering the call for an Indigenous Voice in federal parliament.

I discover the history of campaigning for parliamentary representation can be measured in decades rather than years.  And there’s another surprise … our inner west features in the story.

William Cooper was well into his seventies when he was photographed striding down Nicholson Street, Footscray of yesteryear’s main retail strip.  A hand by one side clutches a hat, while parcels are tucked under the opposite arm.  The long coat over a dark suit, shirt and tie he wears are customary attire for the day, although a gray wooly moustache makes him standout, only adding to Cooper’s robust and dignified presence.  It is the portrait of a proud Indigenous man.  In fact, Cooper reportedly described himself similarly as a, ‘proud Aboriginal man’.  One who sent a petition to King George V, calling for parliamentary representation of his people.

Cooper was born at Lake Moria in Yorta Yorta territory, the area around the juncture of Murray and Goulburn rivers.  At the time of his birth, deemed in the absence of records to be in 1860, as few as two thousand Indigenous people remained in Victoria.

The devastating toll exacted by colonisation was far from over: ‘As a lad I can remember 500 men of my tribe, the Moiras, gathered on one occasion.  Now my family is the only relic of the tribe,’ Cooper said later in life.

Further insight is afforded by an extract from a petition for a grant of land, included in Attwood’s book, which makes for challenging reading: ‘Our hunting grounds are used for sheep pasturage, and the game reduced, and in many places exterminated, rendering our means of subsistence extremely precarious, and often reducing us, and our wives and children to beggary.’

Importantly, Cooper learnt how to read and write.  He lived on Maloga and Cummerangunja missions.  Throughout his life he worked as a shearer, horse-breaker and farmhand, and became a trade unionist.  Cooper travelled widely throughout Australia and as far as New Zealand, where he saw parliamentary seats had been granted to Maoris.

Cooper converted to Christianity.  He was close to missionaries — Daniel and Janet Matthews, who’d witnessed petitioning used as a political tool in the anti-slavery movement, and later Thomas Shadrach James.

‘They [the Matthews] teach the Bible in such a way that they persuade the Aboriginal people to identify themselves with the Jewish people of the Bible … with the dispossession,’ Attwood tells those gathered, and others watching online.

Commenting further on the shaping of the influential advocate, he explains: ‘They give Aboriginal people what may loosely be called a political education.’

Attwood describes a ‘distinctive thread’ running through Yorta Yorta petitions: ‘Aboriginal people profoundly believed that in 1788, and at later points in time, the British gave solemn undertakings to protect them,’ he says.

The Great Depression had struck when William Cooper moved to the working-class Inner West in 1933 for what would be the pinnacle of his advocacy.  He lived in modest houses, which at least in some cases were without heating or electricity, in Footscray and Yarraville.  Close to the city and it’s resources, Cooper pursued his fight for justice.

He establishes the influential Australian Aborigines’ League, becoming its inaugural Secretary.  The league organises a symbolic Day of Mourning; Cooper asks for churches’ support with a Sunday of observance.  This is the genesis of the national celebration of Indigenous culture we know today as NAIDOC Week.

His involvement in protesting the Nazi persecution of Jews earned Cooper enduring honour within the Jewish community.

Yet William Cooper is best known as Secretary of the Australian Aborigines’ League for sending a petition to King George V requesting parliamentary representation of Aboriginal People.  Two thousand signatures were secured, mainly from Indigenous Australia, despite a fear of punishment.

Cooper referred to observing the world from an Indigenous Australians perspective as the capacity to ‘think black’, something he claimed had eluded lawmakers.  The same might be said of the government of the day that effectively shelved the petition.

Over the years, Cooper experienced terrible personal tragedy and loss.  Before remarrying, he lost his first two wives to disease.  A son was killed on the battlefield during World War One.  Another of Cooper’s sons, Lynch Cooper, won national and international athletic championships, presumably a source of great solace to Cooper.  But approaching eighty years-of-age, there was another disappointment to suffer: knowledge his historic petition had not made it past Australian shores.

William Cooper returned to Country in 1940.  He passed away the following year.

A referendum is necessary to enshrine an Indigenous Voice in the legislative process.  We’ll discover if modern Australia now shares a similar dream as Cooper’s.

Watch a recording of the Footscray Historical Society event — ‘William Cooper: An Aboriginal Life’ on their Facebook Page.