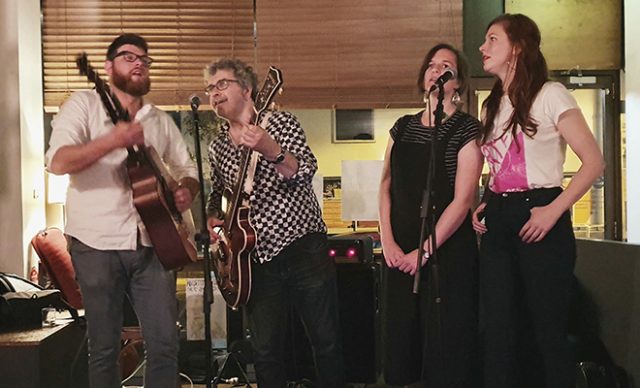 WestSong is a Footscray-based song-writing collective that was formed in the autumn of 2018. Members upload their original songs, which are written around a fortnightly theme, to an online audio platform.

These audio platforms are then linked a Facebook group where WestSong members provide encouraging feedback.
Conceived by three local musicians – Alice Andersen, Heather Fiona, and Dom Rogers – WestSong now boasts twenty-three members who span a broad range of genres from Irish folk to soul and hiphop. Part of WestSong’s mission is to help champion the Footscray live music scene by encouraging local songwriters to hone their craft and build their self-confidence. It has become a great way to connect with like-minded people in the local community, and has emboldened more than a few rusty troubadours to dust off their Matons and Moogs and get back into the groove!

In the Beginning: Heather and Dom first met at the Dancing Dog Café on Albert Street in downtown Footscray. A well-known watering hole for balladeers, bards, beatniks and sparkling-eyed outcasts, the hallowed walls of the now defunct Dancing Dog Café provided the perfect context to mint a song-writing collective. Its highly entertaining Wednesday Open Mic Night, commandeered by future WestSong member and seasoned songwriter Dean Lombard, was the official birthplace of WestSong, and where most of the early members first met.

WestSong Today: Since those heady days, WestSong has grown in size and sonic diversity. We are now meeting with local politicians and working with local venues to enhance and protect the incredible vibrancy that Footscray already has on offer. In light of the closure of iconic venues such as The Dancing Dog and The Reverence, spaces such as The Night Heron, Sloth Bar, and Pride of Our Footscray have become increasingly important as bulwarks of live music in Footscray, with The Night Heron giving WestSong a once-a-month Saturday night residency for the last five months.

The Future: WestSongers are concerned that gentrification, over-development, and rising rents could push the live music scene, and creative people in general, out of Footscray. We believe that a balance can be struck between development but that (as outlined in a recent research report by Footscray MP Katie Hall’s office) a cohesive creativity strategy involving council, local politicians, venue operators, and local musicians needs to be developed to safeguard, and enhance, the live music scene in our beloved ‘Scray. 2020 provides an opportunity to open the dialogue with council and music venues and enact at least some of the recommendations outlined in the report.