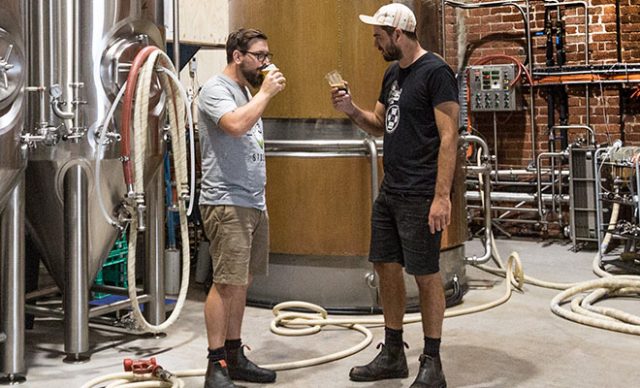 So what do you do?

An ongoing series exploring unusual careers in the inner-west of Melbourne.
by Belle Hann.

Living and breathing beer every day sounds like most people’s dream job. But according to Sam Hambour, professional beer maker, it is a complex and meticulous gig, too.

As co-founder and craft brewer of Footscray’s Hop Nation, Sam has intimate knowledge of all things beer.

“Making beer is hard work,” he says. “It’s not as glamorous as you’d think.”

For starters, the perfect craft brew requires close attention to detail. It also requires strict hygiene and a consistent approach to timing, just like baking a cake. “You can’t be drinking beer at the same time you are making it. You need to be on the ball.”

The rewards, however, are worth it. Sam started Hop Nation in 2014 with co-founder Duncan Gibson. Before switching to craft brews, they were both winemakers making beer as a side project.

After developing a quality beer product, they started the bricks and mortar operation on Whitehall Street. With many different flavours on tap, Hop Nation is known as a must-visit destination for beer aficionados.

These days, Sam spends more time in a general manager role, but is always keen to get his hands dirty. He especially enjoys interacting with other people passionate about beer culture. “It’s a very positive industry to be involved with,” he says.

There’s also plenty of opportunities for aspiring beer makers to get involved in the industry, due to the growth of micro-brews in general. Sam encourages folks to contact local breweries, and also not be afraid to “put their hand up to help at bars” to learn all about the business.

Visit the Hop Nation website and learn more about craft brewing at hopnation.com.au