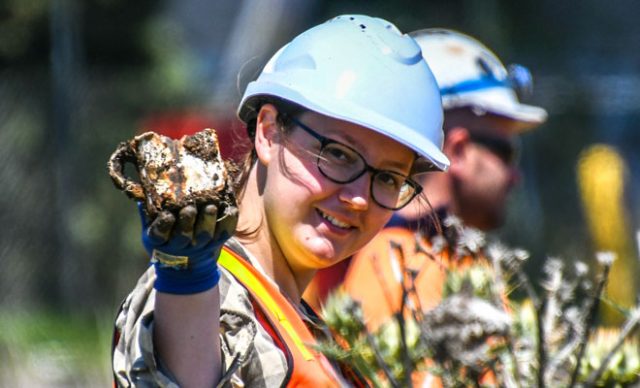 Have you ever thought about what lies hidden beneath the ground of West Melbourne? Or wondered what life was like there hundreds of years ago?

West Gate Tunnel Project crews have discovered this first hand, working alongside archaeologists as numerous historical artefacts are uncovered on site as construction works ramp up around Footscray Road and the CityLink interchange.

The West Gate Tunnel Project includes an elevated road along the length of Footscray Road between Melbourne CBD and Footscray to connect the tunnel to the city and CityLink. To build this section, parts of the old Melbourne Wholesale Fruit and Vegetable Market site have been transformed into the precinct’s main construction compound, but the area’s history has not been forgotten.

Going back to the 1830s, sections of land in this area were commonly known as Batman’s Swamp, and consisted of nothing but large, shallow salt water lagoons and wetlands. Almost impossible to imagine in comparison to what Footscray Road looks like today.

As the 1840s to 1870s rolled in, some areas became home to large industrial buildings such as abattoirs, gas works and railways. The swamp was drained and filled in from the 1850s. Beyond the 1870s, the zone gradually transitioned into a common dumping ground for rubbish and waste.

During the Great Depression parts of the former swampland quickly developed into a place where extremely poor and homeless people created houses out of scrap metal and other discarded items found lying around. The shanty town, commonly known as Dudley Flats, was in use until the end of World War II.

But were such harsh living conditions even legal? History tells us that heavy disputes over land ownership meant the community could continue to grow, as technically, there was no law preventing people permanently living on the site.

As time went on into the 1940s and 1950s, the tip gradually became filled in and built over, meaning it was no longer a viable place for people to live. Parts of the Dudley Flats shanty town were even set on fire in attempts to remove the occupants.

While nothing remains of Dudley Flats above ground, the artefacts discovered (including ceramics, alcohol bottles and medicine flasks) provide a snapshot of what life was like in the community in the early 20th century.

Archaeologist and Heritage Advisor on the West Gate Tunnel Project, Meg Haas, says it’s exciting to be able to piece together the history of Melbourne’s west with these objects.

“It’s important not to underestimate the value of these artefacts. It’s amazing how one tiny piece of marble or ceramic can have such a significant meaning behind it,” she says.

“Artefacts can range from structural features like building footings or fireplace bases, to more everyday objects like bottles and glass, things that give a more personal idea of the site history.”

Although the artefacts are interesting in piecing together Melbourne’s past, there were no surprises encountered during the West Melbourne dig and work crews are now progressing with building the new elevated road in this location.

Archaeologists from Dr Vincent Clark and Associates have undertaken archaeological excavations in targeted areas ahead of major construction commencing on the elevated section of freeway that will connect the West Gate Tunnel to CityLink. All the archaeological investigations are being conducted in accordance with approvals issued by Heritage Victoria.

To read more about the Port to City works visit: westgatetunnelproject.vic.gov.au/construction/port-to-city