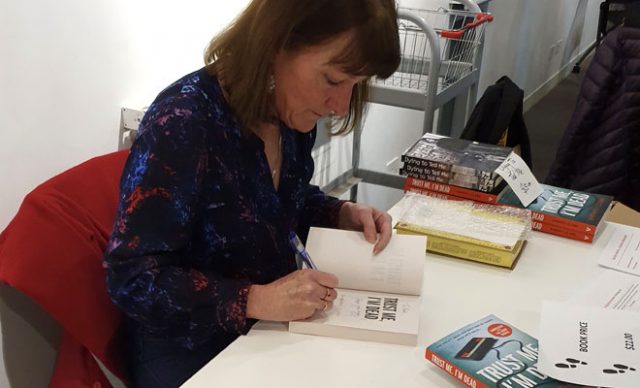 It’s not uncommon to celebrate a book’s release with a cake. A tradition taken to a whole new level at the launch of ‘Trust Me, I’m Dead’. Gracing the freshly-baked sponge was a truly gruesome decoration: prone body pinned to the ground by an iron rod.

Local author and writing teacher Dr Sherryl Clark is known for a swag of popular young peoples’ books. In ‘Trust Me, I’m Dead’, Sherryl has made a 180 degree turn with a successful foray into crime fiction. Giving her plenty to say about novel writing during the event held at Williamstown library.

A light-bulb went off in Sherryl’s mind after reading the true story of a father’s revelations from the grave. Armed with the premise for a book, she set about indulging her guilty pleasure, crime writing.

‘Trust Me, I’m Dead’ is set during Melbourne’s gangland wars. The main character’s brother turns up dead in Footscray. And unless the mystery of his murder is solved from clues he left behind, she’s bound for a similar fate.

Creating a compelling character; setting an escalating plot; and researching the grittier, darker side of life were all part of a writing adventure taking ten years, notwithstanding time off to complete a PhD.

Publication is never certain. ‘Trust Me, I’m Dead’ attracted the attention of a publisher only after being shortlisted in a British writing competition, 2018 CWA Debut Dagger for unpublished first novel. So, Sherryl encourages writers to relish victories along the way. ‘Celebrate the first draft,’ she suggests. Away from the buzz of the launch, I get the chance to dig deeper:

Sherryl, for your PhD you set out to understand why fairytales endure. Care to speculate about reasons for the popularity of crime fiction?

I’ve read that people are drawn to crime fiction because there is usually a sense of justice – the murderer is caught and punished. I’m sure that’s true, but I think a lot of readers also love the puzzle, trying to guess ‘who dunnit’ before they get to the end. I know I like to be surprised, and I hate it when I guess too easily, so layering the clues well becomes really important. Nowadays I think readers want a main character they can love and engage with …

Can you say more about the evolution of your protagonist Judi as a fictional character?

I tend to write characters (and like reading about characters) who are loners in some way, either naturally or because of their life experiences. I have never forgotten reading ‘The Bone People’ by Keri Hulme and her character who lives alone in a tower in NZ. If your character is like that, readers want to know why, so then the back-story develops, and that influences events in the story. What your character decides to do and how they react to people and events will come from who they are and why. She kind of leapt into being from the very first page, with a strong voice and a world view that was a lot of fun to write …

What are the western suburbs like to write about? Was there anything you discovered about the salty side of the Yarra that surprised you?

I’ve lived in the west for more than 30 years, so I had plenty to draw on in terms of setting. It’s very diverse, and I think just about every street has its own history. Years ago when I was doing my BA, I had to do a research assignment on my own street, and I heard such great stories from my neighbour that it changed how I viewed the whole suburb. That sense of history and change underpins a few of the places in the novel …

Special guest at the launch Michael Schlechta has worked at The Age for over 20 years. He was senior editor during Melbourne’s gangland wars when a Metro bus-load of crooks met their maker. And a time, as Michael reveals, when news of yet another gangland atrocity earned a bigger headline than next day’s political revelation.

I’ll leave final judgement on ‘Trust Me, I’m Dead’ to a reader with a nose for a good story, who understands the treacherous nature of criminal turf wars. ‘There are lashings of mystery, intrigue, violence, fear and more,’ Michael says. ‘All those great traits for what we call in the news room, a ripping yarn.’

Check out the book review of “Trust me I’m Dead”. 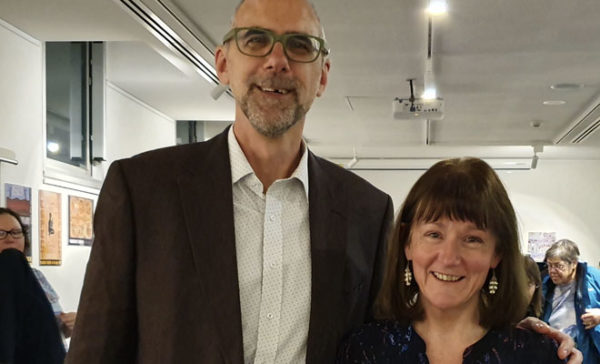