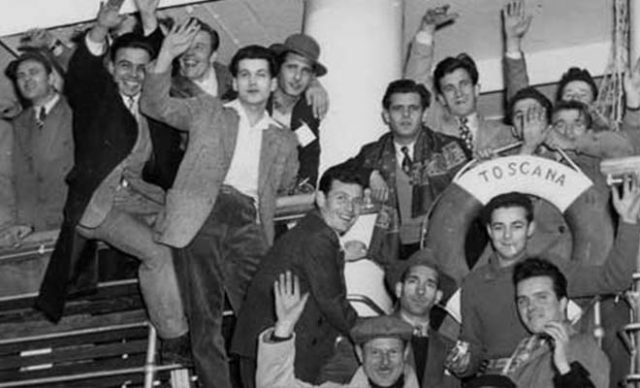 The film They’re a Weird Mob was released in Australia in 1957.  While set in Sydney, its depiction of a newly arrived Italian immigrant could have applied in any Australian city or town.   In one scene in a pub an Australian regular explains to our friend the concept of a ‘shout’ for a round of drinks.  ‘Why for I have to SHOUT?’  he asks loudly.  Such is the life of being in a new country!

Between 1946 and 1960 Australia’s population grew by an average of 2.7 per cent per year.  While this was largely due to a postwar baby boom, migration contributed to more than a third of this growth adding 1.2 million people to Australia’s population and bringing the total population to about 10.3 million by 1960.  From a restrictive immigration policy pre WW2, after the war Australia welcomed migrants from many countries.   In the immediate post-war years Victoria and New South Wales were the leading destinations for migrants.  The Victorian migrant intake peaked in 1960 with a net immigration figure of just over 50,000.

Plentiful work opportunities enhanced Australia’s appeal, particularly in the 1950s and 1960s.   During this time and up to 1970 Australia enjoyed a period of sustained economic growth.  Manufacturing was at its peak and the manufacturing workforce grew from 0.83 million in 1947 to 1.22 million in 1971.  The requirement for low skilled labour was high and new migrants from Southern and Western Europe provided the necessary labour to fill these jobs.  One-third of manufacturing workers in the 1950s and 60s were born overseas.  Others with specific skills worked in the construction industry including building houses, roads and schools in new post war suburbs.

Melbourne’s west was at the forefront of the post WW2 manufacturing boom and migrants contributed strongly to the area’s post WW2 economy.  Factories such as Kinnears Ropeworks in Footscray, the Maribyrnong Ordnance Factory, CSR in Yarraville, Gilbertson’s Meat Processing Complex and Humes Pipe Company (now The Living Museum of the West) all employed large numbers of migrants who were critical to the west’s industrial economy.  The Victorian Railways’ Newport Workshops, which in its heyday built anything and everything to do with railways, employed hundreds of people from many countries in just about every trade imaginable.  This also extended to entertainment where the game Trugo was invented and is still played in Yarraville (Beaton Reserve).

Many immigrants in Melbourne’s west were also self-employed in small scale businesses like retail outlets, delicatessens, grocer shops, cafes and milk bars or employed in small businesses such as clothing, textiles and food production where the capital required was not substantial and where foreign experience could be of value.  Unfortunately, economic changes and the decline in manufacturing led to the closure of many factories and small businesses (such as milk bars) and Melbourne’s post World War 2 immigrants have borne a lot of the consequent job losses.

However, the contribution of immigrants to Melbourne’s west has not been lost with the diversity of cultures in the area reflected in its wide range of built heritage, festivals, fashion, sport and cuisine.  Changes in employment and housing demand in Melbourne’s west have led to it being the highly sought after area it is today.  The influence of post WW2 immigration on the west has played a strong role in the area’s prosperity and everything we enjoy about it today.

(Footnote – this article used publicly available reports from Heritage Victoria, the National Museum of Australia and other sources)

The influence of post WW2 immigration on the west has played a strong role in the area’s prosperity and everything we enjoy about it today.