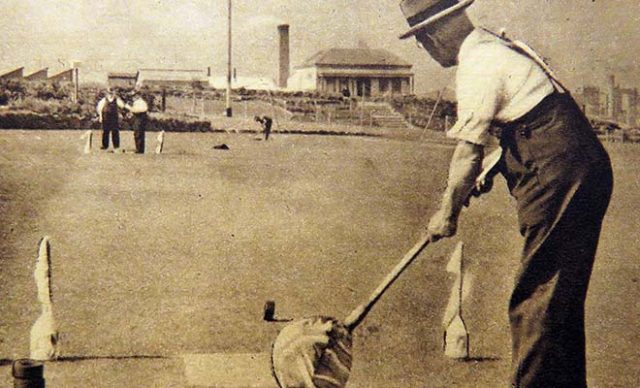 There is little more primordial in sport than to pick up a stick, or some variation of, and whack something else. It is impressive that humans have shown such endless creativity in building on this theme. From Ireland’s Hurling to Japan’s Gateball, from Scottish Croquet, now popularly known as Golf, to Canada’s Lacrosse, the list is endless. It was, therefore, inevitable that in a land populated by such diverse cultures as Australia that someone would eventually pick up a stick, whack something and call it a sport before heading home in time for tea.

Australia’s interpretation of this perpetual pastime was christened ‘Trugo’ and the man who was home in time for tea was Thomas Henry Grieves. Grieves was a migrant of Scottish heritage from Durham, England, who found himself working on the railways in Melbourne’s West in the early 20th century. According to oral tradition, Grieves’ Trugo was one of several improvised games played by the workers at the Newport Railway Workshops. The workers, though productive, still had time to throw, chuck, knock, thump, or kick whatever harmless object around the workshops was available and call it a game.

In the case of Trugo, the object being chucked, knocked or hit was a black rubber ring which is said to have come from the buffers of the old Hobson Bay Railway carriages. During the 1920s the carriages were being decommissioned and the rings may have been lying around the workshops calling out for creative redeployment. It is said the rings were hit for distance or through makeshift goals, tin cans erected at the end of a span of rail.

Over the next decade the game followed Grieves from the workshops to the suburban streets of Newport and onwards to the Footscray flats below the Yarraville Gardens. Grieves had moved house from Newport to Yarraville around 1926, retired from the railways and was keen to experiment with the game. Given it was played only by his family and a few friends, that should have been that. A pastime drifting to a fond memory like many workplace games of the day.

Then, in the 1930s, a local engineer Claus Ebeling befriended Grieves and the idea of a true sport emerged. Like Grieves, Ebeling also had a working class background but he grew up in the German community on Victoria’s goldfields. His father was from Frieburg, his mother a Dane from Fyn.

Ebeling started life as a blacksmith but not long after moving to Yarraville he established his own engineering company. Ebeling had been ambitious in business with strong connections amongst the West’s business community. Being an important office bearer in the local Freemasons lodge also strengthened his community ties and may have helped protect him from being interned during the War.

So, in 1936, as Europe began to draw up the map of World War II, a British migrant and a German Australian founded the Yarraville Trugo Club. It was dedicated to the welfare and friendship of the West’s Senior Citizens, or as they preferred to be called, the ‘Pioneers’.

Through the 1940s and 1950s Trugo established itself as a unique niche in Australian sporting life. With a player base of retired labourers and tradesmen, the men could enjoy a low-cost sport and a chinwag with old mates. Trugo also remained highly localised. Aussie Rules had its Barrasi Line meandering through the Riverina above which Rugby League was the dominant code, but the demarcation for Trugo was a much tighter affair. It was drawn around a narrow corridor of the city’s inner most suburbs. Beyond this, retired gentlemen wore white uniforms while playing lawn bowls on carefully manicured greens, oblivious to the game of Trugo. There was no Trugo in Toorak.

In the rural areas there were some exceptions. Shepparton, Wagga Wagga and Bendigo, for example, claimed local Trugo teams but they all faded away. There were also rumours of Trugo in Perth and Sydney, but little evidence survives.

By the 1960s Trugo was played by hundreds of men, but the decade is most notable for the women’s game. There had been women’s teams from Trugo’s early history starting with the Yarraville Ladies Trugo Club in 1939. However, the opportunities for competition drifted until 1960 when Moonee Ponds, Newport, and South Yarra clubs joined Yarraville to develop the women’s game. The women insisted on a smart dress code adopting the white dresses and blouses of lawn bowls. The men, on the other hand, began to relax, dressing down from their three-piece suits to a cardigan, long pants and of course their hats.

There was one crucial difference with the women’s game compared to the men’s: their rejection of the ‘Great Turn’.  The Great Turn had occurred in the 1950s when men moved from sideswiping to tunnelling. In sideswiping the player faces towards the goals, uses a long-handled mallet and swings at the ring. In tunnelling, the player turns away from the goals, bends over, raises their derrière and shoots the ring between their legs with a short-handled mallet. The women of trugo would not tackle this manoeuvre until the early 2000s when ‘decorum’ was again a foreign word and player numbers had fallen to such an extent that the women’s and men’s competitions were amalgamated.

Moving into the 21st century, Trugo was considered by outsiders as a little dowdy, anachronistic and rolling to sporting extinction. With the closure of the Footscray Club in 2009 there was only one club left in the West, the sport’s birthplace, Yarraville. However, attitudes began to evolve again and if local craft brews were considered cool why not a locally brewed sport. With the threat of losing the oldest extant Trugo club house in the world, the local community rallied reviving the Footscray Trugo Club and returning it to competition in 2018. It is now the largest club in the Victorian Trugo Association.

Today the game of Trugo is a mixed gendered, cross-generational sport with players ranging in age from their early 20s to their mid-90s. Fashion on court is relaxed, with a cap or bucket hat, t-shirt and shorts de rigueur in some teams, while others put an effort into wearing at least a uniform top. Giving it a True Go in the neighbourhood maybe a little parochial but it is also a celebration of the West’s unique living heritage.