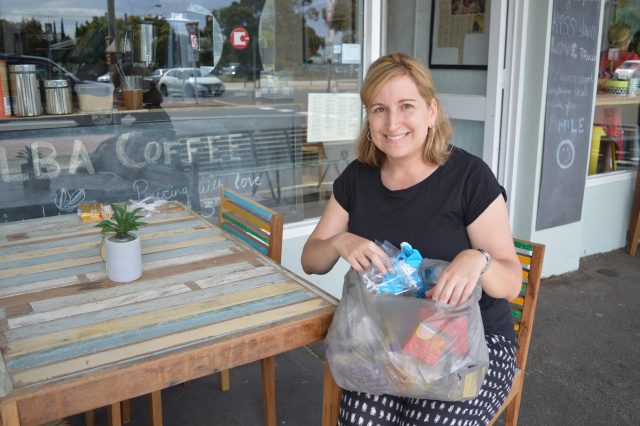 It was 2009 when Elizabeth Kassel, a mother of a young child and working in the fashion industry, started looking at the problem of non-recycled soft plastics.

“I was thinking, why is my plastic bottle recycled and not my plastic bag?” Elizabeth was aware of the disturbing factors surrounding plastic pollution for marine life, and had concerns about what her son would inherit if something didn’t change.

“I am not a hard core environmentalist, but I was genuinely curious with a system that supported some recycling, but not all.”

Elizabeth was sitting at her kitchen table in Williamstown when she planned the REDcycle program, which would divert tons of plastics from Australian soil. “I was in this as a challenge to myself,” confesses Elizabeth.

REDcycle started out in 2009 as a two-year project run out of primary schools, funded by Sustainability Victoria and providing project work for Elizabeth and a part-time Admin person. It was titled RED for Recycling + Education = Difference, and 170 schools signed up over the two year period.

Each school received some education and encouragements to bring in their soft plastics for collection. The amount of plastic collected during this period was something that Elizabeth had completely underestimated. She knew that 250 pieces of plastic equalled one kilogram of plastic, but she didn’t figure on receiving two tons of plastics through the life of the program. At this point it was clear that this was not a one-off project, and the real work was about to begin.

In Australia, we are generating so much hard plastic for recycling, that much of it is being sent offshore to meet the demand, and because it is cheaper. Elizabeth was keen to find a local solution for the soft plastics she had collected, and when she was able to partner with a company called Replas in Carrum Downs, the project started to move into a new phase.

In late 2011, REDcycle and Replas began working together to develop a closed-loop system where soft plastic was collected, recycled, and then resold as a commercial product.

With Replas on board, the REDcycle Program moved rapidly forward, but it still needed more support. The recycled products being produced at Replas were not enough to finance everything.

Elizabeth confides, “I needed to go back to the source of the plastic and to the food and grocery retailers to see if they were interested in product and commercial stewardship as a way to take the program further.”

“To Cole’s credit, they were very supportive. They supplied the bin and supported the bin collection,” explains Elizabeth.

Coles also began purchasing products made at Replas. Then the Australian Food & Grocery Council helped Elizabeth to quickly source the right contacts in the food industry to negotiate their involvement. Many companies were ready and waiting for a solution to a problem that they knew they would have to address.

In 2011, over a trial period of nine months, 115 Melbourne metro supermarkets had REDcycle bins installed and the collected plastics were then transported to Replas. The REDcycle program was now moving into a true product stewardship model where everyone involved in the life cycle of the product’s packaging – manufacturers, retailers and consumers – choose to  share the responsibility for its best outcome.

In 2012 the REDcycle program grew rapidly and was rolled out in every capital city except Darwin, with 480 Coles and 100 Woolworth’s stores offering REDcycle bins. In 2015, REDcycle expanded again when it was launched in Auckland, New Zealand. This year, the program is being rolled out to regional Victoria and regional NSW.

There are now over 700 collections a week going to Replas, diverting 7.5 tons of soft plastics from landfill and creating commercial products including plastic pollards, decking, outdoor furniture and seating.

The job of a soft plastic recycler is fairly grounding work, and Elizabeth supports all of her drivers who pick up from the supermarkets, and equally values the staff at supermarkets that have to empty the collection bins sometimes several times a day. It can be quite dirty and tiresome work.

The REDcycle program also has a post in option or a champion driver model that allows for a variation of how consumers normally participate. So for example, Chiltern Post Office is a collection point because there is no participating supermarket nearby, and Elizabeth herself quite often takes a drive up there to collect their load.

Elizabeth believes the REDcycle has been successful because it is a commercial business. With each stage of its development, it has had to be measured and strategic in making decisions about expansion. Whilst Elizabeth has considered some of the other waste streams that need addressing, e.g. nappies, tyres, rubber gloves, she is mindful to keep the essence of the program much the same. For her, it is not about partnering with major recyclers, it’s been about starting out small, about resource recovery, and developing a closed loop system that is economically viable.

The challenge Elizabeth set herself to solve this problem of non recycled soft plastics has been a tremendous journey and learning curve. The initial project that is now a company, the Red Group, has been extremely successful in a relatively short time. Elizabeth’s hard work and commitment to the environment, now offers consumers a very easy way to play their part in creating a sustainable future by recycling at their retailer.

For more information, visit redcycle.net.au and remember to recycle your soft plastics at participating supermarkets.