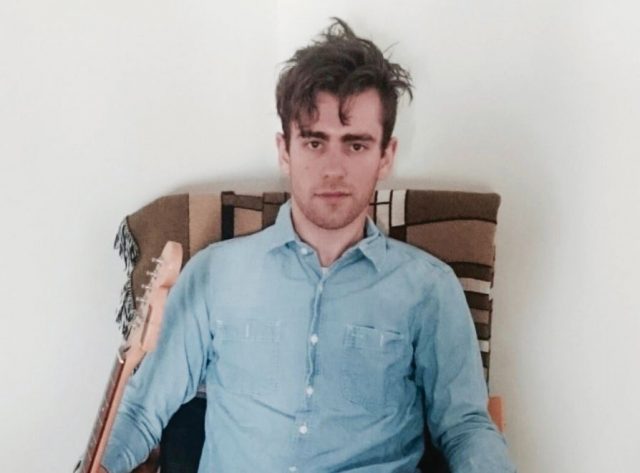 The Feedback Cafe on Ballarat Street in Yarraville is almost full to capacity. The young crowd spills onto the pavement sipping bottled beer as they patiently await the set from Housemate.

Lead singer Callum (Cal) Gleeson slides into place behind the keyboard and introduces his band. At the heart there is Fiver, then Abe, who doesn’t make a sound. Lastly there is Keith, who is controlling the MIDI, but at the same time “he is pretty cool”.

They are the core members of the group but they don’t give Cal any attitude. Playing with  inanimate, music-making equipment has it perks. Fiver has been with him the longest and by the sounds of it, Abe might be the Yoko Ono of the group.

Cal went to high school at Footscray City College. He benefited from the strong music program. The college was even equipped with a recording studio. It was his first time in a studio and while basic, he credits the experience as the foundation of his current level of expertise.

“I was constantly thinking about music while I was at school.”

A young Cal Gleeson composed his first song about dinosaurs. It was a piece for the recorder. He was the only one of his friends to have private tuition for this beginners instrument.

“I learned it to the end point of the recorder or at least that’s how I remember it as five year old.”

His goal: To impress his parents with his commitment to music so that they would reward him with a guitar. It worked and he has been playing guitar ever since.

The audience looks to be mostly Cal’s friends and family with a sprinkling of Feedback Cafe regulars. Karla and Alex, the owners, flit around the space serving drinks. Tonight is also Cal’s birthday.

Cal performs for about an hour. His set is 50/50 covers and original material.

“I am trying to do a bit more writing at the moment. I don’t struggle writing music, not that it’s good, but it comes out quite easily.”

His banter between the songs is almost as good as the music. He recounts a life changing story from his week, for the last 25 years he had been parting his hair on the wrong side, it was only a few days before at the hairdresser that he had this revelation. He tells the story while running his hand through his hair, getting accustomed to the new parting.

By the time he started high-school he was listening to The White Stripes and also went through a Mars Volta phase.

“I went to the Big Day Out, it was my first music festival, and saw The White Stripes play, I was pretty excited by that. I think I wore the tee-shirt for a good week afterwards.”

The magic of multicultural music was hard to escape growing up in Footscray.

“You would always hear other music, even just walking around. Dinner at a Vietnamese place always had pop playing on the two TV’s that would be on either side of the restaurant. A lot of the African places would play their own music, I remember getting into Mulatu Astatke, an Ethiopian jazz musician.”

This Ethiopian jazz phase was not a favourite of his older sister, Cara.

Throughout Cal’s set of beat driven, guitar heavy but sparse arrangements the one constant is the laughter of his friend, a fellow westsider, Hilary who thinks Cal is very funny, the room seems to agree, or maybe her laughter is contagious.

Cal convinced himself he just wanted to play the guitar but realised, “there is a glut of guitar players” so he needed to diversify his skill set. Cal relies heavily on technology and his band to produce his sound.

“It usually starts with drums or the beatbox because that is the easiest to loop first. If you loop that right and it’s in time, then everything else on top is much easier to do. I might rely heavily on machines, but everything you hear comes from me.”

From the moment Cal speaks there is something distinctive about his voice, should he tire of music he could easily find an alternative career recording audio books.

“By complete luck and privilege I have a pretty unique instrument to start with, guitarists all get the same instrument. With voice, you still need to learn the skills but the instrument is the luck of a genetic draw and I don’t have a special one or a good one, but it is a rare one with a lot of lower notes which just isn’t common.”

Cal finally listened to his number one fan, his mother, Fran, and found a singing teacher to refine his “operatic voice” (her words, not his).

“Once I was over my teenage arrogance and ignorance combined, I thought I would give singing a go.”

Before going solo, Cal played in a jazz trio at the Dancing Dog about once a month. The group was paid in beers.

“It was more of an exercise in performance. It was meant to be a learning experience. We tried to do too much, there were too many guitar and bass solos. It was a lesson in how not to do it.”

Before calling it quits with the Dancing Dog, there was an opportunity for a gig at The Big West Fest.

“We were really excited because it cost 5 dollars at the door and we packed out the room, but unfortunately most of the people who packed out the room arrived before the person on the door. I think only two or three people paid.”

Cal spends hours perfecting his set. His German voice teacher has given him a piece of advice, which he has taken to heart.

Now he has to convince the rest of the band.

Hear Housemate and Friends March 11 at the Feedback Cafe.

JOSE LUANSING IS GOING WITH THE FLOW