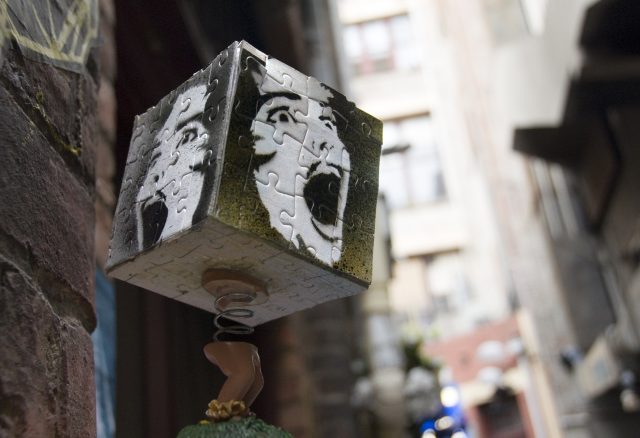 As Told To Mario Varricchio

A few years ago, having recently moved to this side of the Maribyrnong, I discovered a large stencilled art work under the Bunbury St rail bridge below the Footscray Community Arts Centre. It was of a little boy looking up at 99 bottles of beer, and I really liked it. It’s long gone now, but it recently reappeared, albeit in the centre of Melbourne in Hosier Lane. Surprisingly, in such a dynamic street “gallery” it lasted much longer than many bigger name pieces. Both pieces were by “Sunshine born and bred” western suburbs signwriter turned street artist MiKoniK. However, the more recent version was more detailed and stencilled first onto jigsaw puzzles, before being put up – something that MiKoniK has made his trademark. This month I caught up for a beer with him at the Reverence Hotel to hear his story.

“I’ve always been artistic, and as a teenager I undertook a signwriting apprenticeship. When you’re working all day, you don’t feel like being creative when you get home. I don’t work in that industry anymore – I spent 20 years in the trade before I became obsolete. The last job I was there for two years, and I used a brush once for just one job. It was the most frustrating experience of my life. The guy who owned the place wasn’t even a signwriter. He had just bought the business and I was the only tradesman. I was dealing with people who didn’t understand layout and design and the things you learn over a course of years. The old trade’s gone. These days, digital printing has gotten to a point where they can do anything. Every signwriter that I used to work with are out of the trade.

“I left the trade after I got ill and spent a few months in hospital. When I got out I needed something to do. At the time in hospital I was on my phone a lot looking at Instagram and Facebook – I’d just discovered them. I started following a lot of Melbourne street artists and thought I might get into that and have a go at it. I liked the concept of stencils.

“My first piece of street art was in stencil font and it just said, ‘WE ALL START SOMEWHERE’.  At the time I thought I was being clever, but in hindsight, I don’t know. My second stencil was of Ted Baillieu. At the time he was Premier and he was messing with TAFE funding and it irritated me so I downloaded an image off the internet and put some devils horns on him and put it up at the train station that night. Every morning the maintenance staff would paint it out and every night I’d put it back up. I did that for about six weeks, until I gave up. I came across one recently that was still outside Centrelink on a fire hydrant. It was years old, and two weeks later it got painted out. Centrelink moved and they must have refurbished the building.

“I had this need to have my own identity. You look at pieces on the street and you know who the artist is. I looked at my work and thought, this could be anyone. For a while I just couldn’t come up with anything, and then I was at my sister’s house. She’d been at the op shop and had bought all these jigsaw puzzles for a dollar. As soon as she said the word ‘puzzle’, it was a lightbulb moment. I went home and dug around and found a couple of old puzzles and put them together.”

I mention to MiKoniK that my neighbour came home the other night with one of his pieces, all proud of himself for finding it stuck to a wall in Footscray. I ask him how he feels about people taking down his pieces.

“My opinion on people taking my art has changed quite a bit. A couple of years ago, it really used to get to me – especially when I was putting things up in the city, places like Hosier Lane. It got to a point where I’d put something up, walk around the block and it’d be gone. That sort of pushed me back, so I decided I was going to stick to my part of town. I guess it’s why I identify as a western suburbs’ artist. The Bunbury St area (below FCAC) was appealing, there’s other artists work down there. You put something up out this way and it tends to stick around for a bit longer. It worked out that if I made my work too difficult to get off, then people ended up destroying it in the process so I thought I’d better make it a bit easier – that way at least the work survives.  Giving art away is just natural to me. If someone says a nice comment about a piece on Instagram for example, I’ll say they can have it.

“I get the odd commission. I’ve done a few for people in America recently. I’ve got one now I’ve got to do, but the money’s not an issue, I really don’t care, but also I don’t have anything against people making money from their art.

“Recently I’ve been collaborating with street artist, Kranky (Insta: “Kranky_one”). We bounce off each other, but it’s not competitive. Our work seems to go well together and you just start thinking of different things. Because of what he does (3D installation), I had ideas of bringing a piece together, the two of us. I was trying to figure out a way to do that, certain things didn’t work out, but what I figured out for myself, I used. I came up with the cube on a spring and ones that bobble up and down. It catches people’s eye and they think, ‘I’m going to go and steal that!’”

MiKoniK and Kranky have a joint one day exhibition called “Screaming in Red” on Sunday 17th April, 12pm – 5pm at Section 8 in Tattersall Lane in the city.

“Social media is one thing I think and talk about with people. It’s not that important that you get X amount of likes. I’ve had the same amount of followers on Instagram for 3 years, and I don’t care. My daughter’s got more than me. It’s not my motivation for doing what I do; I mainly use social media purely for documentation. It’s just a tool.”

His collaborator in the upcoming show, Kranky, makes work with a political message.

“With political statements, I had my couple of digs but I thought to myself that sometimes people don’t want to have opinions forced on them. I received a good response to my 99 bottles of beer piece. I redid the original in Hosier Lane and it lasted a couple of weeks. It was at that time the biggest puzzle I’d done, it was 5ft by 3ft and technically it was better than the original (on the Bunbury St Rail Bridge) and there was a lot more work and several different colours, yet you look at the two and the first simple one was so much better. Perfection is not welcome in my life, I like the little errors, I think they give things character. I never fix what people perceive is a mistake. I never try to fix it, I just leave it.

“I don’t have an end goal; I don’t have a point where I want to get to. I just want to continue to evolve. I’m also collaborating with someone at the moment, Tinky (Insta: “Tinkysonntag”). She’s an artist who does little scenes with little cows and different things. Another stencil artist, Akemi Ito (Insta: “Akemiitoart”), organises these monthly paint ups. He’s got a really good bunch of people together and puts a lot of effort into it and everyone’s benefiting through networking and the like.”

I ask MiKoniK if he thinks he’ll ever get back into signwriting.

“I got my brushes out recently and I thought it’d be interesting to see how long it would take me to get back up to scratch. You do something for 20 years, that’s ingrained. As soon as I put my brush in the paint and to the panel I thought, ‘it’s still there, I’ve still got it!’ I said that to someone recently, that’s there’s room for hand painted signs in a niche market. There are people out there who are focusing on that. It’s a matter of quality; some people will pay for quality.

“I’ve got all my brushes in order, which have sat dormant for a while. In all the years on the job I’ve never had a proper sign box. It’s a box you put all your brushes in and it’s a certain design that’s been around for 200 years. You can’t buy them, but I never had time to build one. I recently just built myself one and it’s nicely stained. The skills are still there, but I’m not interested in working for anyone.

“People say they’re not artistic, but I think everyone’s got some artistic talent. Whether they’ve discovered it or not, well that’s a different story. I used to teach stencil workshops for Brimbank Council at Sunshine Art Spaces and people were so happy when they produced a one colour image, it was great. It allows people who don’t have great skills the opportunity to produce something.

“I tell people to just have a go. Don’t let anyone tell you that you can’t do something. If anyone shows me their artwork and I think that it needs more work, I never say anything derogatory – I always find something encouraging to say. Another thing I’d say is to find your own identity, no matter what it is. It might be something small. It’s a hard thing to come up with, your own style I guess, but I think that it’s important and it opens up all sorts of other avenues.”

Check out MiKoniK’s work on the links below or send him an email. Who knows, he may even be up for painting you an old school sign.