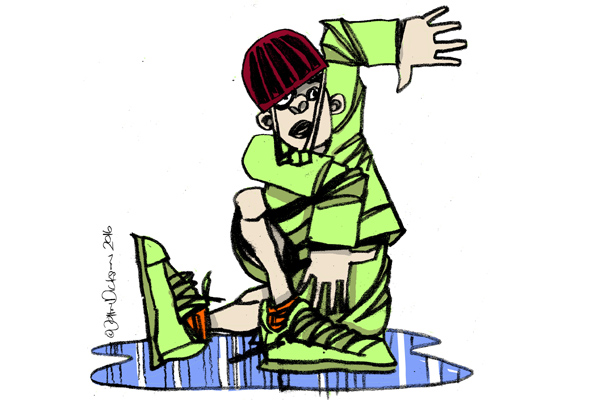 I’m not sure what finally tipped the scale. Was it that I saw too late, the swarm of secondary school inanity generators lying in wait for me? Was it that my attempted escape to another carriage was thwarted by the sudden collapse in air pressure, pilfered by the ‘sos’ and ‘likes’ and ‘duhs’, and the appalling vocal fryings of the Future of Australia as they climbed over each others’ wisecracks, spiralling ever upward to a crescendo of…nothingness?

Or was it this? An insistent ringtone contrived to sound like a wooden xylophone, only tuneless, that announced the following conversation:

‘Oh congratulations. What did you have – a little girl, a little boy, or…?’

Or what? Every fibre of me strained to hear the truth of this third way, but her faux concern had already shifted to a machine gun rattle of ‘locking things down’ and ‘getting things across the line’ and ‘going forward’ and various ‘spaces’ she seemed to occupy simultaneously, and I was left stranded.

It was all of these and more – the pea-in-a-can insistent beat of bad music through bad headphones; the conversations where participants used ‘at the end of the day’, as if that was OK; the show-offs, the bullies, and the know-alls; and, finally it was the clashing whiffs of sadness and failure and fear that rendered me inert, in need of resuscitation.

Jan didn’t believe for one minute that retributive bike riding to work was the action of a sane and thoughtful person. She immediately pointed out that the only thing in doubt about my children becoming fatherless, was at which point in the journey would I be relinquishing my mortal soul.

Nevertheless, here we were beneath an azure sky, a light wind buffeting the high-vis vest I had procured from a two-dollar store [$5.50, thanks], Jan with one child at foot and one at hip, urging each to take a final look at their doomed father. And before I could place an elegantly shod foot on a highly-engineered pedal, she had turned on her heel and closed the front door behind her.

I have always owned a bicycle. The current machine is a state-of-the-art Mountain Tamer, with tyres rather more suited to dirt tracks than slick pavements. It has, I believe, somewhere in the vicinity of 295 gears, and brakes that bring it to an immediate halt under all conditions. It had a light on the front, but I broke it. I have owned it for seven years, and have ridden it five times – but you never forget how.

I joust with Siri, who deliberately pretends not to understand my way-finding requests and insists on sending me to Eltham. I am pedalling and yelling at my phone. Already I am attracting unwanted attention:

‘Knob!’ said one. ‘Organ donor!’ shouted another. ‘Concentrate, you dangerous dickhead!’ they chorused.

But I have already happily negotiated Nicholson St and am turning into Footscray Road, the doubters left far behind me. And there before me, Shepherd Bridge is corked on both sides by angry trucks. I choose the footpath and am cheated of the soothing view of the mirrored Maribyrnong River by a mix of carbon monoxide asphyxiation, the rattle, crash and grind of screaming engines challenging the threshold of hearing tolerance, and the spine-jellying regret brought on by the abject terror that any, or all of these behemoths might collapse on top of me at any moment.

And then suddenly I am uncorked and the lull between traffic light changes allows me to cross on to the bike path. The sweet, sweet bike path. It is flat and kempt and the view of industrial wastelands with a topography of a gigantic legoland of shipping container stacks, will do just fine.

There are those who ride bikes for fun [me], those who ride against the clock [lycra, clad in free ads], and the occasional eccentric, who sits just a wheel width behind me, the two-way radio strapped to his handlebars reporting the comings and goings of emergency services vehicles. He stops when I stop, refuses to go ahead when invited to, implies he is on a surveillance mission – of me. Someone told him to.

He watches me into the architectural crime scene of Docklands and we muse over John Kelly’s Cow Up a Tree sculpture. He thinks someone chased it there. John’s plaque says it’s something about horizons, consequences and trams. I think it’s funny. My shadow and I part as friends, and I cross the road to the maw of Collins Street.

This canyon, guarded by parkland, is as benign a gateway as you please. But inside, where the sun only briefly shines, lie cyclist booby traps – car doors, truck doors, pissy cabdrivers, angry entitled men cosseted by European cars, precarious pedestrians, grim-faced fellow pedallers and trams the size of 40 rhinos. Death awaits at every pedal crank.

I cross Spencer, King and William by deploying high speeds, sudden braking and randomly yelling expletives. But it is at the intersection of Queens Street, just as Elizabeth Street heaves into view, that the whole enterprise suddenly unravels.

On the downhill run, my rear tyre disintegrates.

The doctors say I will be on my feet again in a jif. But train travel should be reconsidered with some urgency. Perhaps permanently. I can see Jan standing at the foot of the bed, nodding in furious agreement, one child at foot, the other on her hip.