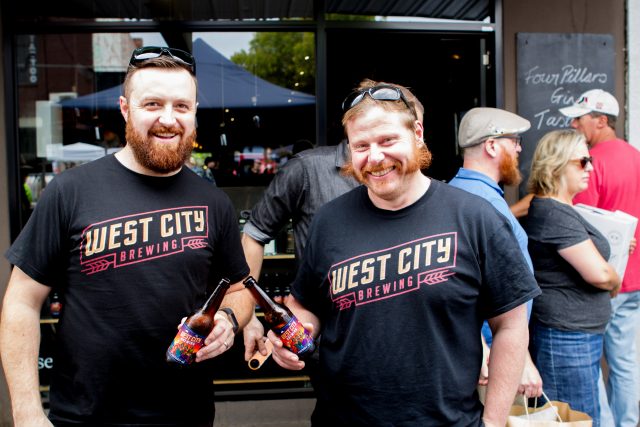 I stumbled across my very first bottle of Footscray Ale from West City Brewers whilst sitting on my Ken Done in Seddon Wine Store. Like a true beer connoisseur, the label dragged me in. But the sheer beauty of this brew was comparable to Annabel and Clarabel meeting for the first time: magnetic.

I decided then and there that I was a genius for discovering this amber liquid in a pretty bottle. So I told heaps of people about it, showing off how much of an expert I was. But instead of the expected ‘ooohs and ahhhs’, I received knowing nods and responses such as ‘how good is it?, ‘so and so brought a sixer to Nath’s birthday and we all thought he was rad’ etc etc etc.

So if you haven’t heard of or tried Footscray Ale, here’s some information so you can brush up on your craft brew knowledge before you rock up to Nath’s party next week.

West City Brewing is the baby of two brew boys with the coolest first names, Fergus McGregor and Bevan Dalziel. They tell me they’re gypsy brewers. I ask them if they brew their beer in a caravan while they dance and play tambourines. The answer is no.

Gypsy brewers simply use other existing breweries gear and tank space to make their own beer. Apparently heaps of labels start out this way, which is fair enough. I mean, looking back to my own home brewing days, the plastic tub and heat pad, plus bottles and tops took up a spare room. It’s not like many people have those massive rocket brew tanks sitting in their living room.

Bevan explains that all home brewers, and probably most beer nerd types have dreams of making their own commercial beer or having a brewery.

“We are not getting any younger, and the time is right with craft booming world wide – especially in Australia – so we took a bite of the bullet. While we are gypsy brewers at the moment, as the label becomes established, we are hoping to gain some funding and build our own brewery. Maybe we will end up helping out some new brewers and then the cycle continues!”

Both fellas are local westies. Bevan himself has been running the West Side Beer Drinkers group for a couple of years now. So of course it was only logical that they got cracking on a label of their own.

While my hard core beer drinking days are almost done, thanks to becoming a parent and therefore becoming responsible, this beer is something that I’m proud to have in my fridge. Think of this brew as that one tasty refreshment at the end of a hard day’s work, or that shared six pack treat between you and your partner if your kid decides to go to bed early and you have the time to hang in the yard amongst the Tonka trucks and talk about your renovation dreams. This beer is your responsible pal in a bottle format. You want to savour the flavour not smash and drown cash. Got it? Now buy it.

For these passionate brewers the future looks golden. With flagship beer Footscray Ale ticking all the right boxes for Westie palettes, Fergus and Bevan are looking to re-release an Oatmeal Stout called Oaty Session Stout in Autumn, and Sunshine Ale in summer. And while they’re at it, a bar and brewery in Footscray could be on the menu in the not too distant future.

Feeling thirsty just reading this? Head to West City Brewing’s website for a current listing of stockists. If your local bottle-o doesn’t stock it, tell them to or even better – ask your local pub to hook up a keg.

West City Brewing: I found mine at Seddon Wine Store. Find your closest stockist at www.westcitybrewing.com.au