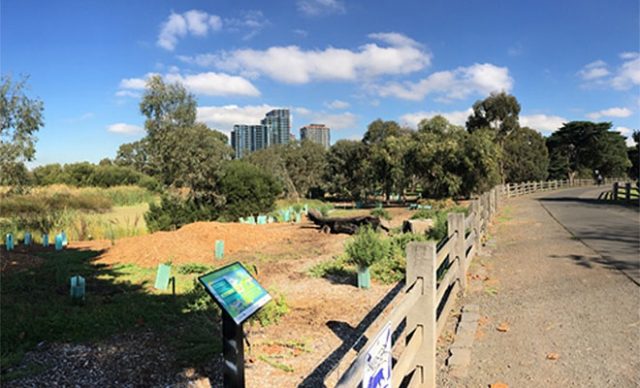 ‘The assumption that culture and nature occupy different dimensions of reality has long had a strong presence in Australian society’ – George Seddon, 1997

Like many suburbs within Melbourne’s inner-urban ring, Footscray has experienced significant population growth in recent years. Whilst high-density residential developments may provide a more desirable option than unmitigated urban sprawl, in a place already deprived of green space, such as Footscray, it is vital that what little does exist is not only protected, but enhanced. Valuing urban green spaces has a multitude of positive benefits, not least fostering closer connections between urban dwellers and their local ecosystems. Newell’s Paddock is one such urban green space. It is a reimagining of the urban environment that considers nature and culture, or the human and the non-human, as inherently intertwined.

Named after nineteenth century politician and businessman David Newell, Newell’s Paddock Urban Nature Park is a recreated brackish wetland and parkland adjacent to the Maribyrnong River. It functions today as a recreational space for activities such as picnicking, cycling, jogging, playing ball-sports, and bird-watching. It also serves as an important educational tool, providing valuable insights into how ecosystems within the Maribyrnong River Valley might have behaved prior to European settlement.

Newell’s Paddock is a beacon in terms of how the cultural might be integrated with the ecological/natural. It is a testament to what can be achieved by passionate, motivated, and environmentally-minded people working together to achieve a common goal – in this case, the reconstruction of a wetland system. Newell’s Paddock epitomises an inclusive form of ecological stewardship that respects both ecological principles whilst also providing ample space available for community needs. 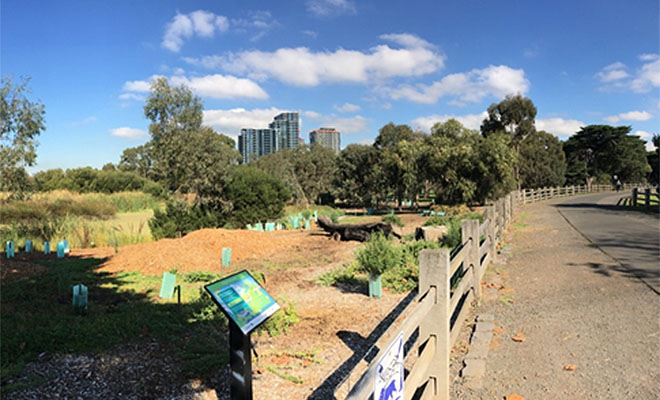 Fig. 1: Educational signs, like the one featured above, are integral to educating members of the local community about their local ecosystems.

On the higher ground in and around Newell’s to the north and west, heavy clay soils of volcanic origin persist. These landscapes, once dominated by grasses and small forbs and replete with stones, characterised much of the surrounding countryside prior to European settlement. A She-oak Forest, approximately one kilometre wide, dissected this vast open grassland, extending from Gellibrand Point, Williamstown in the south, to Braybrook in the north. It is worth noting, that the contours of Footscray’s early economic and social development were profoundly shaped by this confluence of swamp, river estuary, and basaltic plain,2 reiterating how the natural is always and inevitably entwined with the cultural. Indeed, it is not unreasonable to suggest that this unique geographical location gave rise to what became by the late 1800s one of Australia’s pre-eminent industrial powerhouse suburbs,3 to the devastation of its once vibrant and diverse environment.

A legacy of its unique physical geography, Footscray and the Maribyrnong River on which it sits have experienced many changes over the years. The word ‘Maribyrnong’ itself is an anglicised version of the Wurundjeri Woi Wurung term ‘Mirring-gnay-bir-nong’, which translates as ‘I can hear a ringtail possum’.4 With fertile fishing stocks, owing to the convergence of saltwater and freshwater,5 and its strategic location by the junction of the Yarra and Maribyrnong Rivers,2 it is clear why traditional owners regarded Footscray and its surrounds with such esteem.

The first recorded visit by a European to the area was Charles Grimes, Deputy Surveyor-General of New South Wales, who arrived in Port Phillip Bay in February 1803. Grimes and his company were largely unimpressed with the countryside around what was to become Newell’s Paddock, reporting that ‘the hills were full of stones, the land very bad, and very few trees’.2 The group also complained about how far upstream the saltwater penetrated. It was in large part due to this scathing report of the area that now comprises the suburbs of Yarraville and Footscray in particular that Melbourne was not settled until 25 years later.2

Like the Wurundjeri Woi Wurung before them, when Europeans did eventually begin colonising the area, they took advantage of its natural assets, albeit in more destructive ways. By 1844, Europeans had effectively cleared the She-oak Forest,2 and had commenced bluestone quarrying at numerous locations in and around Footscray.4 By the late nineteenth century, owing to the sheer number of noxious industries crowding its banks, Footscray was crowned by one media outlet at the time as a ‘Stinkopolis’,5 with the water flowing down the Maribyrnong River being described as ‘black and stinking’, featuring ‘bubbles of gas constantly rising with a rotten effluvia.’2 This stark and sobering account adroitly illustrates the extent to which the once mighty Maribyrnong had deteriorated.

Industrial development of the area coincided with the destruction of the Maribyrnong River as a popular recreational spot, contributing to a decline in property values stemming from the economic depression of the 1890s2 By the turn of the twentieth century, the river had been more or less completely ruined for activities such as fishing and picnicking due to the heavily polluted water and its associated unpleasant odour.2 From pre-gold rush boiling-down industries to piggeries, slaughter-yards and meatworks, tanneries, pipe-making factories, paint factories, and livestock saleyards, the Maribyrnong River was not a place associated with beauty, serenity, or even nature itself. This destruction of the natural in Footscray and surrounds is a quintessential example of working class environments and communities bearing the heaviest costs of economic modernisation.6

By the 1980s, the Maribyrnong River was beginning to be reimagined and reinvigorated. The decline of industry in the post-war years coincided with projects aimed at increasing public access to the river through the construction of cycling trails and walking paths.2 The iconic Angliss Meatworks, once a seemingly timeless mainstay of Melbourne’s industrial west, closed its doors in 1977. This paved the way for the eventual return of a portion of the Angliss site closest to the Maribyrnong River back to nature in the form of a wetland reserve – Newell’s Paddock Urban Nature Park.7,8 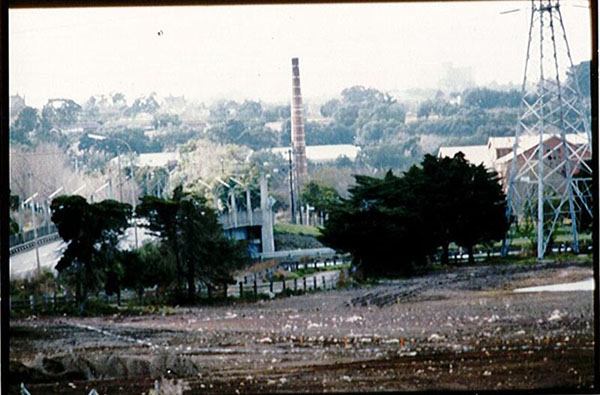 Originally designed by Landscape Architect Dr. Jill Orr-Young in 1988, Newell’s Paddock has evolved to embody a variety of ecological vegetation classes. Ecological Vegetation Classes (EVCs) are the standard unit for classifying vegetation types in Victoria. They are ‘described through a combination of floristics, lifeforms, and ecological characteristics, and through an inferred fidelity to particular environmental attributes’.9

Whilst some purists may argue against the embellishment of Newell’s Paddock with species not consistent with these aforementioned EVCs, my personal experience in restoration ecology and land management suggests that adding additional species can in fact be very beneficial. Due to the irreversible changes in the geomorphology, hydrology, and soil composition that have occurred as a result of past land-use practices, a meticulous recreation of a pre-1750 ecosystem is virtually impossible to achieve. In attempting to revisit a pre-1750 ecological benchmark, it is easy to negate the fact that the ecosystems are themselves reflexive and responsive to the way in which we as humans have shaped them through time11. There is also the added argument that including flora indigenous to the broader Victorian Volcanic Plain region could benefit species whose habitats have been reduced,12 and in some cases almost completely destroyed.13 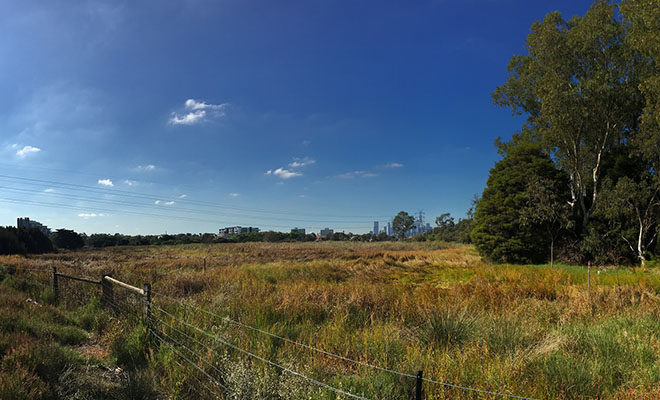 Fig. 3: The Brackish Wetland Aggregate (EVC 656) component of Newell’s Paddock. To the left is a large section comprising recreated Swamp Scrub (EVC 53), which is listed as endangered by DELWP.

Newell’s Paddock Urban Nature Reserve exemplifies what can be achieved in highly urbanised spaces. With the population of Footscray expected to double over the next 30 years,14 the importance of not just green spaces, but ecologically beneficial ones, cannot be understated. In a suburb experiencing a burgeoning apartment boom that shows no signs of slowing, spaces such as Newell’s Paddock provide invaluable nature-culture interfaces for people – including children – who may otherwise have limited opportunity to experience the wonders of the natural environment. 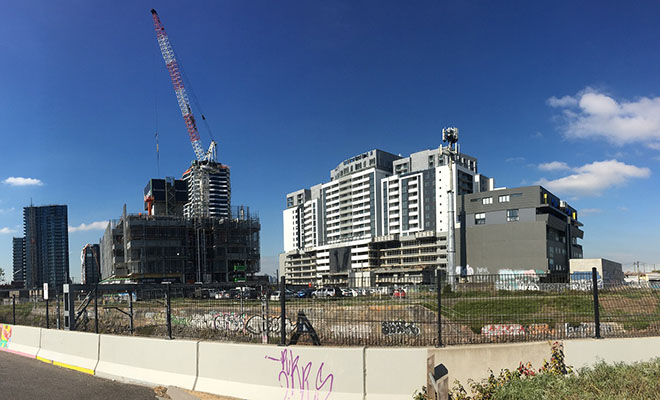 Fig. 4: A massive apartment complex being constructed across the railway line from Newell’s Paddock in Footscray. This development highlights the growing importance of environmental assets in highly urbanised settings as spaces where apartment dwellers can engage with nature.

*All photos taken by Dominic Bowd with the exception of Fig. 2 which is publically available.

ON THE HUNT FOR OUTDOOR ADVENTURES IN MELBOURNE’S WEST