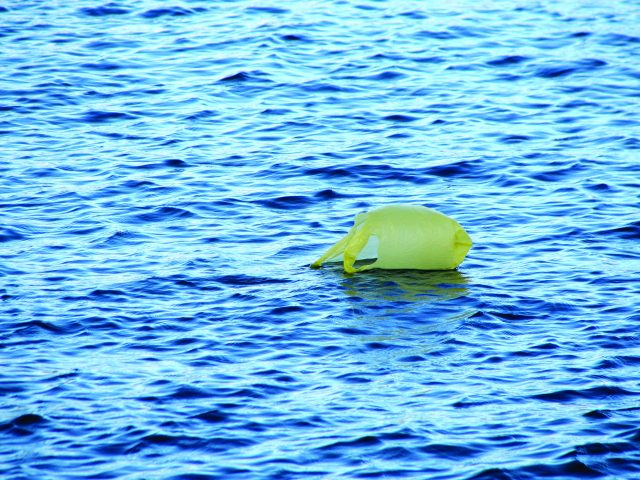 On January 1 2002, the Bangladesh government banned polythene bags using the Bangladesh Environment Conservation Act 1995.Under the law, there is a complete ban on production, import, marketing, sales, display, storing, distribution, transportation and use of polythene of less than 55 micron thickness for business purposes.

Plastic bags are harmful in many ways. The used bags eventually find their ways into drains, canals, rivers, parks and streets,  harming the environment. Polythene bags clog sewer lines and drainage systems, causing water logging and resulting in serious harm to many living beings. They pose a serious danger to birds and fish and marine mammals that often mistake them for food. Look closely at low lying, marshy land and you will see millions of these unseemly bags floating or lying around- they are not only an eyesore but also a health hazard to many creatures, perhaps with the exception of mosquitoes! Environment experts say the worst thing about polythene is that it is non-biodegradable and its decomposition takes at least 400 years (Prothom alo, Sep 05,2014). Many other countries and municipalities have taken action to curb plastic bag use, from Europe and Africa to Asia and North America.

Australia uses around four billion plastic check-out bags a year. If you tied all of them together, it would create a chain long enough to go around the world 25 times!(abc.net.au- April 29, 2008). South Australia, Tasmania, Northern Territory and ACT have successfully banned lightweight plastic bags. An estimated 50 million plastic bags end up in the environment each year in Australia, mostly in our waterways and the ocean, where they kill and injure dolphins, turtles and other marine life (http://plasticbags.planetark.org/gov). When South Australia stopped the use of plastic shopping bags in 2009, people very quickly changed their behaviours and brought their own bags to the supermarket. There are plenty of alternatives available for businesses and consumers (Herald Sun Morning- March 2, 2015).

The hope now is that the federal government follow the mindset of these individual state governments, who have started to move in the right direction. Otherwise we end up in a situation of “two steps forward and one step back” or as the Bangladesh saying goes, “to behave like the proverbial monkey in the math book, climbing the oily pole two meters in one minute and slipping down a meter and a half the next.” Almost all the state governments and communities within Australia understand why we should ban plastic bags so why not the current federal government and all the political parties who sit down and make decisions- there is  nothing to lose, only the opportunity for Australia to get better.

Bangladesh, a developing country, has taken this action 13 years before Australia, which has a long-standing culture of loving and respecting its land and ocean. This should be a no-brainer for us.