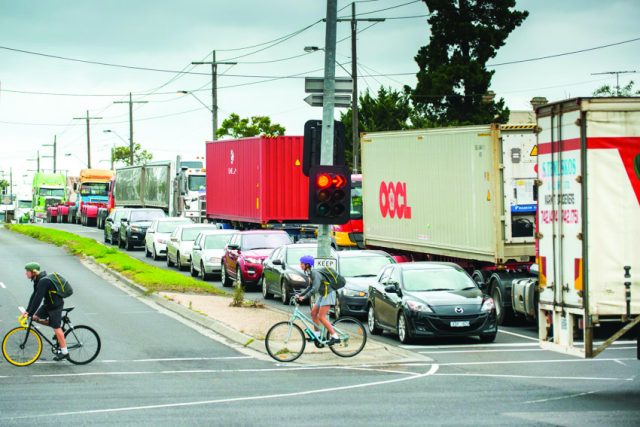 Melbourne’s  population has skyrocketed in recent years – especially in the west, putting considerable pressure on essential infrastructure. We see the evidence of this daily in heavy congestion on the West Gate and trucks rat-running through inner-west streets.

All cities rely on transport infrastructure, not just for getting around but to support economic development and growth. An increase in population and transport demand that is not matched with new infrastructure has the opposite effect – it decreases productivity, wastes time and money, and affects liveability in many ways.

This is the context in which Transurban has developed the Western Distributor – a proposal to meet some of the key growth, transport and liveability challenges that we face today, and which will only become more challenging in the future.

When the West Gate Bridge was built in 1978, it changed travel in Melbourne. It allowed for faster journey times from the western suburbs and the regions to the CBD and supported growth and economic development in the west. Now it sees 200,000 vehicles cross it each day. Can you imagine Melbourne without it?

But we can no longer rely solely on the West Gate Bridge. One incident on this important crossing can bring traffic across Melbourne to a standstill and leave thousands of people stranded for hours. If the bridge or even just a few lanes are closed for any reason, thousands of vehicles turn to the only alternative route – and the inner-west is inundated with traffic.

But it’s not just when the bridge is out of action that this is a problem. Many thousands of trucks travel through the inner west each day to access local industry, the port, or just as a ‘short-cut’ on the way elsewhere.

Locals are fed up with the constant stream of truck traffic rumbling along residential streets. They say it affects daily life in many ways  – from pedestrian and cyclist safety to traffic delays and the diesel grime that builds up on their homes and cars. Air quality and noise on Francis Street in Yarraville have been measured by the EPA, and the results show that residents here are putting up with more than most other Melbournians.  There is consensus that something needs to be done, now.

Since submitting the Western Distributor proposal to the Victorian Government for consideration, Transurban has been listening to the views and ideas of different people who have an interest in the proposal, and working on refining its design.

The company intends to continue developing its proposal in consultation with the community and stakeholders. Right now, the proposal is in its infancy and is still being assessed by the Government. It’s the perfect time to get involved, share ideas and raise questions – before decisions are made about how to proceed.

Go to consult.transurban.com for more information and to share your ideas and knowledge to help Transurban get this proposal right.