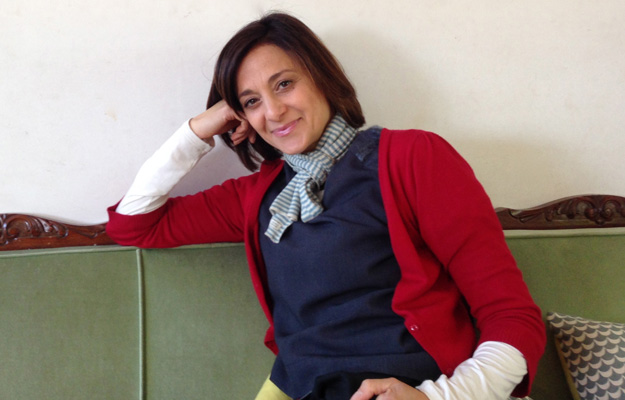 A star of television, film, and the stage – including an MTC play in March – local actress Daniela Farinacci and her theatre director husband, Bruce Gladwin, have lived on Nicholson Street for 25 years. Over time, they have witnessed the comings and goings of residents and the process of gentrification. She has kindly agreed to give me the lowdown on living an artist’s life on Nicholson Street.

Daniela greets me at her front door with a radiant smile and twinkling eyes. I am struck how TV and film actors often appear physically smaller than their on-screen personas. Daniela has starred in many iconic Australian films such as Lantana, Look Both Ways, Little Fish, and Lion. Of her many TV roles, my favourite is her portrayal of the gutsy Detective Helen Callas in East West 101. The petite figure welcoming me into her house doesn’t look capable of wrestling bad guys to the ground, but this is a testament to her skill as an actor – to create believable characters totally unlike herself.

I am led down a short hallway, past a big pile of cardboard props and costumes (more on that later), to a large, light-filled kitchen/dining/living area at the back of the house. This room is furnished with an eclectic mix of antiques, op-shop finds, a couple of mid-20th century cabinets, and an enormous dining table that suggests the owners enjoy hosting lively dinner parties with family and friends. Colourful art adorns the walls, and in a purpose-built niche is the pièce de résistance – a plaster statuette of a blond, blue-eyed Jesus that Daniela rescued from an op-shop and dressed in a crocheted poncho.

The house has not always been this way, she tells me. It was originally built in 1880, a simple three-room workers cottage. Later, a lean-to for a kitchen and a bathroom was added, and an outside toilet. By the time Bruce found the house in the early 1990s it had been unoccupied for some time and was in a neglected state. He bought it for very little compared to today’s prices but at the time it was a big deal for two young artists.

‘The house was very derelict but it didn’t bother us,’ Daniela says.  ‘We were just stoked that our repayments were less than what we’d been paying in rent.’

Back then; the area was mostly blue-collar and quite rough in places. Drug addicts would often shoot up behind the back fence. One time Daniela arrived home to find two men lurking inside the house. She acts out the scene, stomping into the hallway and bellowing ferociously, ‘BRUCE!’ The would-be intruders scarpered. Another time, her elderly neighbour’s fence was burnt down. Those issues aside, Nicholson Street was a tight-knit community and the locals looked out for one another. Daniela and Bruce formed close friendships with their neighbours on either side.

And there were no trendy cafés or fancy stores. Daniela laughs and spreads her arms in a gesture of joyful resignation. ‘We were two freelance artists, broke but happy. We often ate out at the cheap Vietnamese restaurants in Footscray.’

After seven or eight years, the house became so rundown they were forced to either renovate or sell. The couple loved the locale, so they bit the bullet and took out a loan. They built up the slope of the section, bringing the bathroom and toilet inside, adding another bedroom, office, and the heart of the home – this large open-plan area. It was a canny decision professionally, personally and financially.

Their respective careers took off. Bruce became the Artistic Director of the internationally acclaimed Back to Back Theatre. Daniela landed the role of Paula D’Amato in the renowned Australian film Lantana, for which she won an IF Award for Best Actress, and a Film Critics Circle Award for Best Supporting Actress. Other roles quickly followed on TV, film and stage confirming her reputation as a versatile and talented actress. Daniela downplays her success, changing the subject back to family (they now have two children), and Nicholson Street.

‘When we renovated, the area still wasn’t that popular … but now it has changed so much. Some of that’s good, some of that’s not so good at all.’

Gentrification has brought about improvements in the landscape such as parks and playgrounds, and of course the proliferation of cafés. However, there has also been an erosion of community. More and more people are coming from outside the area and there is no longer that sense of everyone looking out for one another. Escalating property values have caused the rates to skyrocket, forcing many long-term residents out of the area. It is a familiar story throughout Melbourne. Artists move into rundown areas, create a sense of vibrancy and interesting lifestyle, and then the developers take over and push the artists out.

For a moment Daniela laments the departure of the older residents and that she can no longer afford to shop for groceries in Seddon or Yarraville. But then her feistiness returns – she is determined to help create a sense of community. ‘I love local … I love local!’

She makes a point of greeting passersby in the street, and welcomes newcomers to the neighbourhood with a tray of home baked biscuits. The family belongs to the Seddon Organic Collective that buys fruit and vegetables directly from the markets. Other positives are that her children attend the local schools and can walk or ride their bikes there. Her teenage son catches the train into the city and is developing the independence and resilience needed to pursue his passion for music.

And she created a show at the school her daughter attends – Footscray City Primary – hence the big pile of costumes and cardboard props stacked in the hallway.

‘I have been theatre-making with all the classes, which culminated in a performance called The Big Day Out’ she says proudly. I have the impression that this project with the local schoolchildren means as much, if not more, than all the big roles and accolades she has received.

Nicholson Street is fortunate to have this big-hearted, generous and vibrant resident who is so willing to contribute to the life and colour of the local community. And for those of you who have missed seeing any of her performances, Daniela will be playing the role of Beatrice Carbone in A View from the Bridge by Arthur Miller at the Melbourne Theatre Company, in March 2019.

Annie Forbes is a puppeteer, writer and dramatist whose plays have been performed throughout Australasia. She is also a published essayist and reviewer. In 2016, her short story The Tin Snail was shortlisted for The Ada Cambridge Award. She recently completed a Diploma of Professional Writing and Editing at Victoria University Polytechnic.