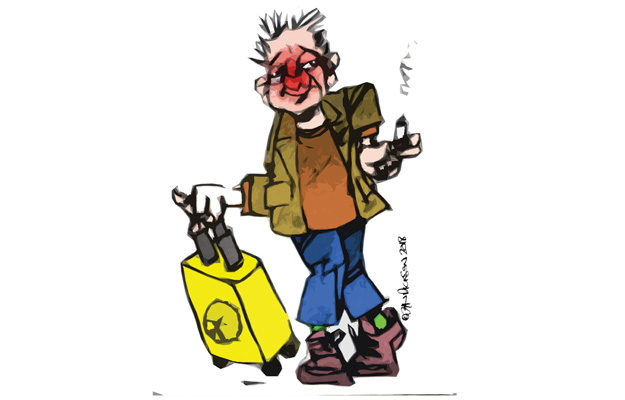 Mandible is in Spain. Last to leave the aircraft at Aeropuerto Madrid-Barajas due to a sleep elixir pile on, our dazed hero continues to communicate in a language determined largely by an insubordinate benzodiazepine backlash tampering with the workings of his cerebrum. Fellow travellers trundling their possessions through the airport are sanguine about Mandible’s bursts of tourettic chatter. They assume he speaks a language other than their own and smile benignly.

‘Karflutnill!’ he boasts, acknowledging them with a demented grin and a careless stagger. Two representatives of Spain’s Policia Nacional follow at a respectful distance herding him towards customs where they hope he will become someone else’s problem.

But first he has to retrieve his baggage from a loopy carousel that snakes rather than circles. This is not his experience at the many airports he has exited and so pauses at a distance to analyse this troubling development. An astute observer would wonder whether he had lost authority over his eyeballs, watching as they choose, in some kind of ocular huff, to operate independently of each other. He solves this problem by placing his free hand over one eye allowing the other to report back on the scene in front of him.

The news is not good. The manifest for flight EK141 DXB to MAD lists 525 sentient beings. Each has at least two bags, some many more. All are before him moving at a speed antithetical to his slothful synapses and none appear to be his. Perhaps a nap until this perverse conga line reaches some kind of equilibrium.

‘Once more the poke of authority reactivates my consciousness: ‘Señor, señor, no puede dormir aquí!’ says a large buzz cut head above a black-clad body cradling a machine gun in its arms.

I’m guessing she’s telling me I can’t sleep here – the large torch bouncing off my midriff providing something of a clue. I look around, the arrival hall is empty and the carousel continues its mindless journey bearing but one bag – my hazmat yellow American Tourister Technum with its hastily sprayed identifier looking disturbingly like the penis and testicles graff so favoured by the adolescent schoolboy.

‘Carthartage!’ my mouth delivers despite my feeble attempts to halt its passage.

Señorita Constable takes a step back and in one seamless move, slides the heavy black torch into its utility belt pouch, rests her gloved hand on the machine gun’s trigger and in flawless English urges me to collect the bag she points at with her gun barrel, and exit through customs.

Watching my fumble, stagger and lurch, I sense Customs Guy is totting up the evidence for a thorough search of this considerable inebriate.

‘Dias,’ says the yawning agent of the state and waves me through. By doing so he reminds me that my doors of perception slammed shut hours ago and really need to be prised open if I am to negotiate this foreign city with any hope of success.

Like any modern city airport with a dot of sense, Madrid offers a railway line to its splendid centre. Exiting at Recoletos station, I pause to allow Google maps to catch me up and offer the pinned address for the small hotel I have paid too much for.

In spite of its best efforts, I set off in the wrong direction.

El Jardin de Flores is an open, airy, light-filled shelter from the hustle of Madrid’s high-end shopping precinct a mere 50 metres from its door. I ‘Hola’ everybody within hearing range with such enthusiasm that the echo of responses takes minutes to subside.

[Incidental travel tip: In Spain you must always greet people with ‘Hola’ before undertaking any further communications. This delightful custom acknowledges everybody’s humanity and opens the door to a warm conversacion.]

A rapid fire exchange in Spanish takes place between the front desk greeters [there are three] and Señor Perma-smile hands me a room pass card.

‘We offer you an upgrade to a penthouse suite, Señor, for no extra cost,’ he oils. ‘You may also enjoy the contents of the refrigerator, which are also complimentary for you.’

Entitlement prevents me from wondering why.

The antechamber is welcoming, the loungeroom plush, the bedroom glorious, the bathroom majestic, the balcony provides a spectacular view across the city and clean ashtrays are thoughtfully strewn generously about the four luxurious
day beds.

In Spain, everybody smokes all of the time. Who am I to buck local customs? I can see my wagon-tumble at Dubai airport has had some unforeseen knock-on, as I tap a Rothmans ‘filter tip, doubly-smooth plus the extra length’ from its package and place it in the corner of my mouth. Like Bogart. I fire it up while watching my reflection in the double-glazed windows. ‘Here’s to you, kid,’ I growl.

Hands across the water

Night has fallen so I set out in search of food and wash up at a restaurant next door to the hotel. It’s a distance I can manage. Like a preponderance of eateries in the world’s capitals, the cuisine is Italian. I skip over this irony as I tuck into a robust lasagna which I wash down with several ‘copas’ of  Tempranillo. At least the wine is Spanish.

I find myself enthralled by a fellow diner at a nearby table. His precise manners reflect his fastidious dress. He is determinedly reading a copy of Proust’s In Search of Lost Time. The giveaway is that the book is upside down.

The Tempranillo works its magic and suggests I might inform the young man of his oversight. Sometimes, it’s hard to judge one’s tone. Clearly mine was more threat than advice. The young man leapt to his feet, straightened the already faultless windsor knot in his tie, lassooed the gold buttons on his navy blazer, barked something in German that contained the word ‘Amerikanisch! and left in a shower of euros.

The maître d’ suggested that I quickly drain my copa and move on. He tutted that he hoped Señor would accept the meal as complimentary for this small inconvenience. Señor could see no reason not to.

To sleep, perchance to dream

Back in my chamber, I note through three tonne eyelids that a considerable portion of the walls are mirrored. While this decorator’s conceit goes to a kind of faux Louis XIV lavishness, I am unnerved that my reflection keeps arriving in odd and often startling places. I am constructed in a way that is best reflected minimally, so to have a three dimensional doppelganger as my constant companion is unsettling. Still, I have travelled for too many hours to resist unconsciousness any longer and I feel the world fall away from me.

There’s a leak in the universe

Hands up if you’ve ever woken in a dark room with no idea of where you are, or how you got there. Then there are the smells and sounds that compound the mystery.

I was also freezing cold. Not in a ‘gee the aircon is a bit full on’ way, but in a down-to-the-bone, paralysing-ice-storm-up-and-down-the-spine way. I was sitting up, but I could not move. As I became accustomed to the dim room, I could make out my reflection from numerous angles around the walls. My white faces stared out from prestigious white sheets [Egyptian cotton, 1200 thread count] gripped tight around me.

Except for that face. That’s not my face. That face appears only in the mirror in front of me. It’s a woman’s face and if the laws of reflection hold, there should be a woman at my side. There isn’t.’

BEWARE THE SLEEP OF REASON AND THE MONSTER IT PRODUCES