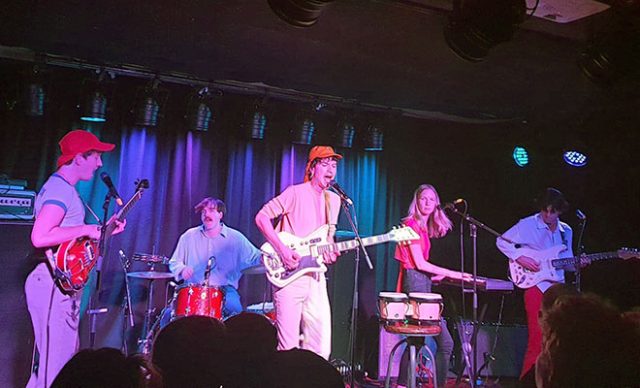 I am beyond stoked that our inner west’s arts and music scene has finally made a comeback, and this has been validated with local surf rockers Hobsons Bay Coast Guard’s gig at the new Hotel Westwood on Friday 16th April.

Hobsons Bay Coast Guard (also known as Hobbies, or HBCG) are best described as surfy psych rock full of personality, best listened to while at Willi beach with a beverage in hand. These guys are the epitome of local rockers – their triple J unearthed photo is in front of Hot Wings in Williamstown and they recorded their LP (which was cheekily named after themselves) in Altona Meadows – you cannot get more local than that. And of course I couldn’t wait for them to bless the old Reverence (RIP), now Hotel Westwood with their sunny, vivacious presence.

In order to experience Hotel Westwood for all it has to offer, my friends and I had a couple of icy cold local beers and food in the main dining area before the gig. Sitting in a red booth, we were bathed in a hazy but bright red light, coming from a pattern of flying-saucer shaped lights above. The aliens aboard might have been listening in to our conversation, while we felt the soft stares from mid 19th century characters emanating from paintings on the walls surrounding us. But we took it in our stride as we shared vegan nachos which were ordered through a QR code on our table. We were pleasantly surprised we weren’t charged an extra few bucks for the vegan option, a rarity for our vegetarian and non-meat fans. The service was also pretty speedy for a packed Friday night. So far so good.

The two support acts, Folk Bitch Trio and Uncle Umma were a great warm up; our ears happily welcoming the live guitar sounds we have so dearly missed coming from the back band-room at the Rev/Hotel Westwood. HBCG then sauntered on stage, some with matching legionnaire hats receiving a great reaction from the crowd, pointing and laughing – ‘How come this isn’t part of the merch?’ I hear a fan ask. They immediately involved us in some all-important stretching – I’m so glad they know to get our bodies all limbered up before we get into some serious exercising of the boogie variety. And to no-one’s surprise they absolutely killed it, playing some old favourites, along with a brand new handful of unreleased music, set to be part of the new album. Their brand new band member played the bongos; she added a wonderful sprinkle of sun and surf we didn’t know we needed until the tropical sound reached our ears. A trio of harmonic vocals sung the new lyrics ‘save my soul, I want to get to know you, turn me on’ layered atop boppy guitar riffs making the entire crowd break out into the grooviest of dance moves. They expertly weaved the ends of songs into the beginning of the next ones and then back again like an inception of HBCG riffs – HBCG roller-coaster chaos at its finest. Popular track ‘Dolphin Racer’ made the crowd explode with fervour, ask anyone in the band-room at that exact moment they would tell you this was the best time they’ve ever had at a gig. They finished the song much more bass-y than the original, and boy was I glad they were having this much fun experimenting with their sound because it was just glorious. And then, before you could say ‘Hobsons Bay Coast Guard by Hobsons Bay Coast Guard’ (a real track), they had finished their entire set.

Absolutely stoked to be a passenger on the Hobsons Bay Coast Guard party boat. Charismatic, natural born surf rockers, loyal to our Bay, I will most definitely be seeing them again.

THE MERSH RETURNS TO YARRAVILLE