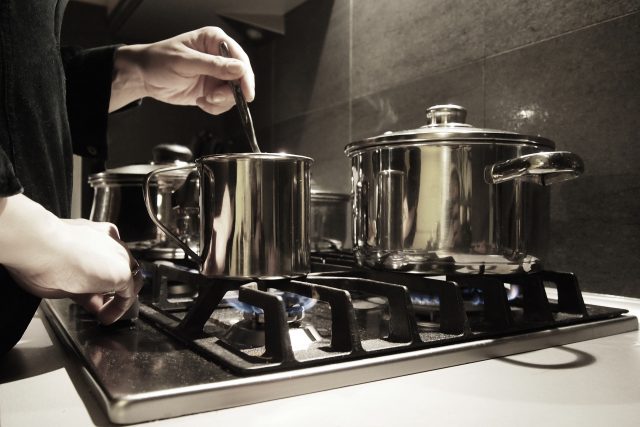 I was recently given the privilege of joining the Iramoo Community Centre men’s cooking group, and I have to say it was an absolute joy. But what started out as a look into a cooking class, turned out to be so much more.

The class started with Chef Vito explaining that they would be making pumpkin soup. The class is a mixture of different people and though it is a men’s class, it couldn’t be more varied or inclusive with men of all ages – it even caters for men with disabilities. Chef Vito runs the class with sheer enthusiasm and a passion for cooking that is quite clear as he demonstrates to the group how to carve a whole pumpkin.

Unlike your average cooking class, where you show up and cook your own dish, Chef Vito masterfully assigns everyone a portion of the entire task to do, thereby ensuring teamwork and comradery is a must.

I approached one of the students – Bob – and asked him about the class. “I come to class for the people,” he tells me.

Whilst this surprised me to start with, it became evident quite soon after that, that everyone comes for the same reason.

Bradley, another student, starts to discuss a course he is doing about cooking, and everyone is listening and responding with such interest that it seems clear this is not only a class that respects one another, but also one that appreciates one another.

As can often happen in the kitchen, someone makes a mistake or doesn’t do something the way that they have been instructed. Now I’ve been in and seen situations in cooking classes of all varying types and when you make a mistake, fear is placed inside of you as the head chef gets upset. Not here at Men’s Cooking Group however, Chef Vito keeps his critiques plain and simple, making it not only easy to understand but so that you don’t fear making another mistake. An absolute credit to Chef Vito.

About a quarter of the way through the class a man in a wheelchair arrives. He is put straight to work. Unlike in other situations where this man may have to wait and sit out, vegetables are placed in front of him immediately for him to chop. Clearly another sign that no one is excluded here.

The pumpkin soup starts coming along really nicely, when suddenly the lovely ladies from the Iramoo Strollers Walking Group come strolling in. The men stop what they were doing at once and stand to attention and greet the ladies in from their walk. By this stage I confess, coming from a younger-generational background, I am completely blown-away by the respect and camaraderie between everyone. These men and women, above the requirement of their respective classes, know how to appreciate and respect one another. Chef Vito offers the ladies some lemons and unlike my age group all of the men chorused his offer. I am absolutely dumbfounded by the respect and courtesy thrown both ways. A respect and appreciation for one another that in my experience was lost long ago.

Once back to work, I asked the men about doing separate parts of the one meal and John another student tells me; “Yes, it’s the same every week. We all have our part to do.”

And so it seems this all comes naturally to everyone and yet from the viewpoint of a typical city boy again I admit, absolutely mind-boggling.

Chef Vito suddenly runs outside and it’s not immediately obvious why. However, he comes back in laden with herbs and cherry tomatoes. “All from the back,” he says. “We grow everything here.”

One of the students asks Chef Vito about the cream they are using and once again his passion is evident as he explains all of the great things about the cream.

This class runs every Thursday and they only charge $5 for it, which in turn is simply a donation to the center. Considering the amount of ingredients the class uses and the experience they will walk away with, this is indeed a bargain.