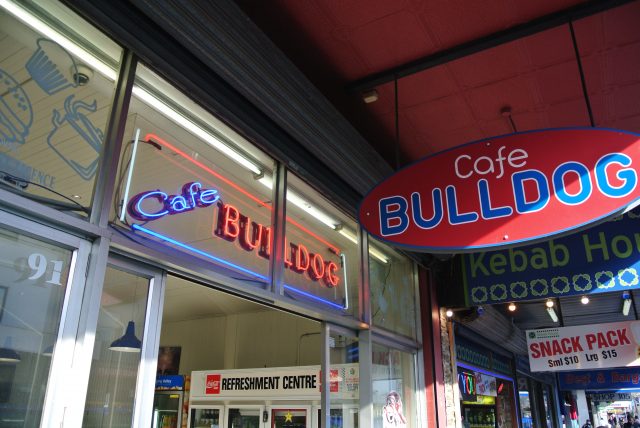 Footscray’s mean street, a cafe named Bulldog and the quickening of compassion

Tim Ho is unlikely to forget what it’s like to run a cafe in an epicentre of social disadvantage.

Kindness certainly has its work cut out in Nicholson Street Mall. Dotted among multicultural colour and exotic cuisine, scenes are unsettling. An aged Islander stands curb-side cursing unseen ghosts. A drug vendor holding back a bull-terrier by a leash, paces his turf. Desperate-looking souls with weathered faces huddle aimlessly.

Cafe Bulldog’s unpretentious but unmistakable shingle appears overheard seconds before I notice a stylishly-tattooed young woman. In the busy footpath she bursts out weeping after dropping a bag, heavy enough to hold a world of possessions. “Need help?” I ask. Through tears, she gestures me away.

If you’re wondering where God’s broken toys, the ones damaged by life, are stashed – it’s places like this. Footscray central.

Cafe Bulldog is a pleasant escape from the despair outside. The cafe is long, more restaurant size, with the ambience of a sixties cafeteria. A counter runs the length of Cafe Bulldog, separating grills, cookers and bench tops from tables.

As soon as Tim Ho realises I’ve come for an interview, he extends his hand and shakes mine.  Missing is the power squeeze. Refreshing. Tim’s welcome is genuine, the sort that leaves you feeling … seen. 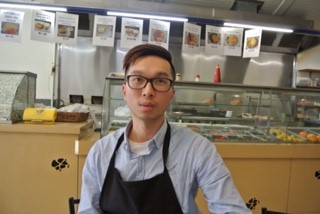 Tim Ho a Honkie. That’s how he affectionately refers to Hong Kong migrants like himself. Ten years ago, he came to Australia to study hospitality. It was around the time China reclaimed Hong Kong as its own. Tim is slender, polite and fits the stereotype of a young Asian man, although three elegant studs in his earlobe hint the entire story may not be so traditional.

“My uncle was a huge Bulldogs’ fan,” says Tim. That explains the cafe’s name, which given the 2016 fairytale AFL grand final win, now looks like a master stroke.

Cafe Bulldog was bought from Tim’s uncle in 2009. Tim’s mother is quietly working behind the counter, cleaning up now that’s it’s after 3.30 pm. and the Ho’s working day is coming to an end. As for a family who’d grown up more accustomed to yum cha than bacon and eggs, serving Aussie fare is no problem. Tim’s now a coffee lover. Who would’ve guessed: in the early days, he stumbled around unable to make a latte.

“I have a question for you,” says Tim. He leans back in his chair as I broach the subject of running a business in a hotspot of extreme social disadvantage. “Do you think those people are bad?” Tim asks with a smile and quizzical look in his eye that tells me he’s wants to say more: “I believe some of them is bad – but mostly, they’re just normal. Some people need help.”

Tim could be forgiven for being resentful. He turns up at work and finds people sleeping outdoors. Customers ask for credit and are never seen again. The occasional bad sort brings a fight inside his cafe: “We have to call the police a couple of times.”

Tim remembers his first week. He arrived at work to discover a shooting had taken place in the mall. “What the hell,” he says, describing his initial reaction: a pack of reporters were congregating in front his cafe requesting an interview. Week one and Tim made the six o’ clock news. 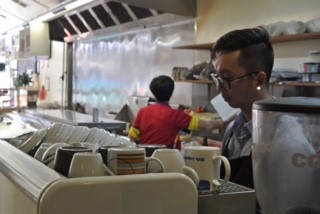 It was by no means the end to early trials. Tim recalls Steve, who on first meeting seemed a “very bad guy. He come inside asking for free food …” Tim declined: he wanted to make a good impression on his customers by keeping the likes of Steve away. Steve had other ideas: “He sitting outside abusing me for one week.”

Tim was learning you don’t change Footscray, it changes you. “Okay,” Tim told himself. “Stop.”  Tim approached his rough-diamond nemesis with a peace offering. “I gave him a couple of dim sims – and he’s happy.”

Five years ago, Steve passed away. Tim learned he ran back in to a house on fire to save his girlfriend. Both died when the roof caved in. “Even bad guys do the good thing,” says Tim as though he is telling me a story about an old friend.

Running a business in Footscray has changed Tim. He’s learned to avoid forming hasty judgements. “Working here teach me a lot. To be patient … to learn how to deal with different types of people.”

The worsening social disadvantage bothers Tim. “You can see getting more and more people, and the age – younger.”  Bad enough, but Tim also has his family’s livelihood to consider. “Less people come to this area”, a problem Tim is remarkably lucid about. “We need people to feel secure in Footscray, to come for food, coffee and entertainment.” And more parking wouldn’t go astray.

Whatever the municipality’s overall plans for the precinct are, they’re not helping in the short term.  Paving is being replaced: outside Cafe Bulldog is a construction site. Metal fencing covered in brown hessian runs like a scar down the belly of the mall, which will remain disfigured till May next year.

Nicholson Street Mall was never known for its aesthetics, but this takes some beating. Shop owners, the ones to bear the brunt, receive no compensation.

Footscray no longer resembles the energetic commercial hub it was a century ago. In the 1930s, Cafe Bulldog was a hardware store owned by the Kidd family in a once-bustling street. Parklands and a handful of grand 19th century homes are the only reminders of the suburb’s past elegance. Mostly, it’s left to historical black and white photos to tell that story.

Make no mistake, a sense of community still pulses through Footscray, including Nicholson Street Mall. Look closely, and for all the neighbourhood’s sorrows, quite possibly, this town’s heartbeat may be stronger than ever.