Winner for the prep to grade 2 category was Kara Mahon aged 6, for her image of a ladybug climbing a cactus. Kara says that what she really likes most about the photo is, “I really like the spikes and then the ladybug landed to make it special. It’s one of my favourite houses to walk past on the Esplanade (Altona), they have lots of nice flowers.” Some patience was needed to capture the photo as Kara explained, “It was hard waiting for the ladybug to move where I could see it better.” 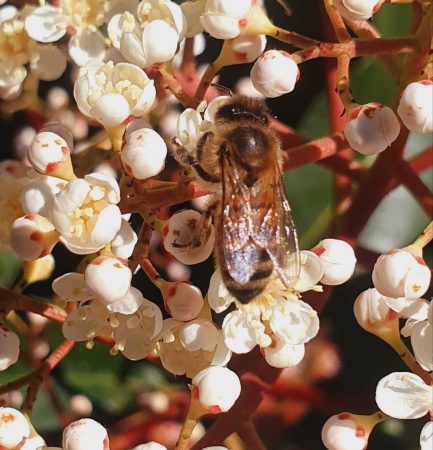 Winner for the grade 3 to 6 category was Ayra Zubair aged eight, for her image of a bee amongst the flowers. Arya tells us what she likes most about the photo, “I like the two elements of nature, the flower and the bee, the bright lighting. And even though the bee was camouflaged it still stood out.” She took the photo using her mum’s phone and explained that it was tricky to take as, “The bee kept flying around so I was scared it might sting me, and I still had to make sure the light was good enough to capture the photo.”

The two winners were very happy to win. Arya was excited to be a winner, and tells us the first photo she would like to take with her new prize camera is, “A butterfly, I like the wings, as are beautiful with lots of colours. I like how they land, and with their face sucking up nectar with their mouth.”

Kara was very happy to win, she told us, “My Prep class all clapped me too.” And as she likes to take selfies at the beach, her first photo with her new prize will be at her favorite place to walk and take photos at Altona beach.

Local photographer Ruth Schwarzenholz ran and founded the locally based photo competition over September through to October. As she saw how her daughter Kira, during the height of the last lockdown, spirits were lifted by connecting with nature through the lens of camera. And so was born the local Altona 5kms Natural Wonders photo competition.

Kira, who has been the number one supporter and helper with the competition, tells us about the hundreds of submissions entered, ‘They were all really cool, going well with the themes from tiny insects to wondrous landscapes, it was exciting to see all the photos come in and see my friends join in too.’

From those submissions, 20 finalists were selected from each category by talented photographers and artists, Liza Birch and Paul Newson. Voting opened on the instagram competition page @5km_natural_wonders for one week to the public to select their favourite. This saw over 500 votes to be tallied by hand.

Kira describes the winners as being delightfully different, ‘I like Kara’s because you can see the lady bug on the corner of the cactus. It looks like it is climbing like a mountain. I like Arya’s because of the blooming flower, and I can see the bee’s furry parts and the wings are shining in the light.’

Prizes were sponsored by MP Tim Watts; a Fuji Instax mini plus film pack (preps to grade 2) and a Digital Camera, Canon IXUS 190 (grade 3 to 6). MP Tim Watts, member for Gellibrand said, “The competition was a wonderful initiative to get kids out in nature and be creative during lockdown. When Ruth got in touch to tell me about the project, I was delighted to sponsor some prizes as an extra incentive for the kids to stretch their creative capacities.”

Ruth notes that whilst the Altona competition has run its course, that it has inspired so many children to be closer to nature and foster a keen interest in photography. She sees it in her own daughter Kira, who now has put ‘good’ camera (just like mum) on her Christmas wish list, so she can take photos of those quick moving birds. Habiba, Arya’s mum shares a similar sentiment, she saw her daughter collect so many beautiful pictures taken with minimal effort, Habiba looks forward to seeing Arya’s interest continue to develop with her new camera.

For more info and to see the all the finalists go to: www.instagram.com/5km_natural_wonders