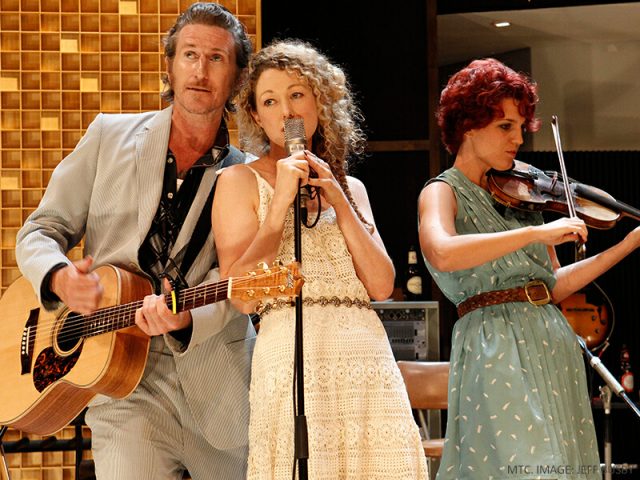 The play, *What Rhymes with Cars & Girls* was a joy to watch. It’s the universal and optimistic story of young lives and young love, with live music by *You Am I* frontman, Tim Rogers.

The story starts when a young female muso, Tash (Sophie Ross) knowingly orders a pizza delivery with no cash. Annoyed delivery boy, Johnno (Johnny Carr) thinks she’s rude and a bit nuts, but she promises to pay him back and says his name will be on the door if he’d like to see her band. A resentful Johnno thinks no more of Tash, but chances across the bar where she is playing. He hears her sing and it’s all over for him. He’s transformed into a happy-clappy, besotted, loved-up chump. The music starts and the audience is hooked on a thing called love.

I’ve recently started dating someone special and I can vouch for live music playing a role in new love. There’s something so special about liking the same music and hearing it live. Good songs say everything better, and in the same way the live music champions this play and opens our hearts. Tim Rogers’ songs seem to sound better – with more feeling – because of the story that’s been so cleverly written around and in between them.

The screenwriter, Aidan Fennessey is on to something, because seeing a play with live music is good value. Tim Rogers sits in the corner of the stage and interacts with the actors on a great fixed set that accommodates both the acting and singing performances seamlessly. And boy, can the actors sing! Not in a hammy way, either.

When Tash (Sophie Ross) sings and laughs, I challenge the whole audience not to fall under her spell. She plays a north shore Sydney princess
masquerading as a grungy muso and searching for a life that’s more real. She falls in love with a working class boy who is as good as gold and
handsome, but heaven forbid, “isn’t studying anything” according to Tash’s over-the-top, wealthy parents, in a hilarious scene where we’re regaled with the story of when our worthy Johnno meets Tash’s brandy-soaked baby boomer parents.

Johnno and Tash are a gorgeous young couple, the musical performances are beautiful and I’d watch it again.

After the play, my new boyfriend and I hung out in the Art Centre’s Curve Bar and chatted to the actors, who clearly had a lot of fun on stage. I
told Sophie Ross she should start a band. “You sing beautifully!” I gushed, still star-struck from seeing the play and live music. ‘There’s something so special about going to the theatre, especially when it’s good’, I thought, as I caught a glimpse of a mature age couple flirting quietly with one another and clearly on a date.

*What Rhymes with Cars & Girls* is sure to please the lovers among us. It plays at Arts Centre Melbourne, Fairfax Studio until March 28.