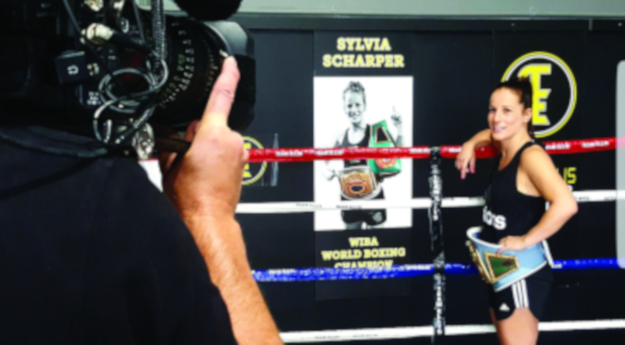 Over the last 10-years Sylvia Scharper has had over 30 fights, won two WMC Victorian Titles in Muay Thai, and an Australian ANBF Title in Pro Boxing. Last year she accomplished her dream – the Professional Boxing WIBA Super Flyweight World Championship. She’s also the subject of an upcoming, aptly named documentary, The Relentless.

“Most people in elite sports share similar stories of growing up excelling in various sports and being driven by their competitive nature. Me, not so much! I cannot skip, I cannot jump. At school, I was the student who received ‘Thank You for Participating’ awards and ‘Good Try’ ribbons in sporting events. I have hilarious flashbacks of taking every single hurdle down with me during races. I remember lifeguards walking alongside me during swim races to make sure I was okay!”

Sylvia must cope with a lot of barriers as a woman in sport – particularly a male-dominated sport.

“There is a lot of bias, inequality and misconceptions and the divide in opportunities compared to my male counterparts is glaring. It has taken a lot to pursue this path. To thrive as a woman in sports you have to have grit, which means not having limits placed on you – not by yourself and definitely not by anyone else.”

She’s been in the West for over 6 years now, drawn by her love of inner city living after having grown up in Brunswick.

“It finally came time to buy a house and I was determined to get into Footscray. I loved its proximity to everything, the atmosphere, the culture, the community, and the variety in local eats and drinks, and the market. The diversity and with that the array of people that live here and the array of food choices – it is fantastic.”

Like most of us Sylvia has witnessed plenty of change in the west over the years.

“It has completely boomed. Cafes, restaurants and bars have popped up absolutely everywhere. My favourite place for brekkie used to be a single front café where you could always get a table. Now, it is a double front café and you have to put your name on a list with people lined up on the street. The café culture is incredible and only growing.”

For small joys, she looks no further than the entourage of animals she comes home to, and loves the sound of dog’s feet through the house.

Outside of fighting she is a counsellor, and a mentor for the Chin Up Project. She volunteers for Lifeline, for Lort Smith, and as an Animal Assisted Therapist at a local woman’s center in Footscray. She spends her spare time punching things – of course – eating, drinking beer, studying and writing.

“I am also working on a Martial Arts Therapy program. I am hoping to raise funds to sponsor this program through the documentary and a clothing line.”

The Relentless: The Sylvia Scharper Story has exclusive never before seen footage and interviews to give an insight into the life of a prizefighter. Follow Sylvia on Facebook for screenings. www.facebook.com/sylvschiavoni