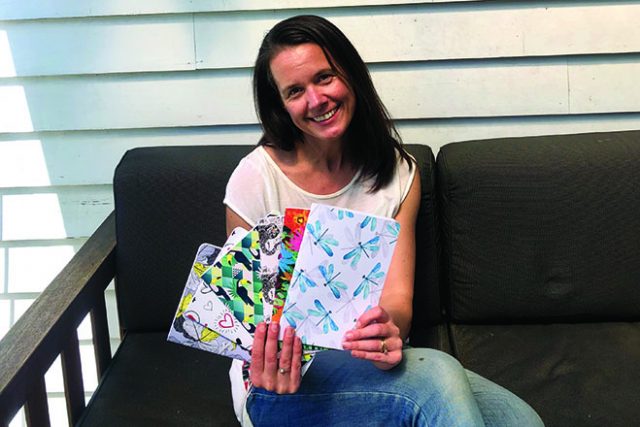 Kate Tapping is the inner-west driver behind Write the World notebooks.  At $10 a pop, 100% of the price of each notebook goes to approved effective charities that improve the lives of people living in extreme poverty.

“The charities are recommended by The Life You Can Save, based on their effectiveness, ensuring that the purchase price of each notebook has the greatest impact possible. For example, one $10 notebook can supply safe water to five community members for a whole year.”

Kate originally bought in West Footscray in 2001, and after a three-year stint over in England, moved back to Australia and bought in Newport in 2005. She’s been there ever since.

“I grew up over in the eastern suburbs and my husband is English. My brother bought in Newport in the late 90s so we got to know the area through visits to him. He and his family live just on the other side of Melbourne Road to us – it’s been great being so close and seeing my gorgeous nieces and nephew growing up.”

What else connects Kate to the inner west now?

“The best community you could ever hope for – a strong network of neighbours and friends. It’s a little like living in a country town.”

Kate has seen many changes, primarily their house which was the stereotypical ‘renovator’s dream’.

“We’ve now got an inside toilet – that was definitely a major milestone.”

For small joys each day, Kate loves being able to walk to so many places and to always see friendly and familiar faces along the way. She also really appreciates that her kids have been able to ride their bikes to and from primary school, high school, and their friends’ places.

“I think there’s also a great sense of space and increased well-being living near the bay and the water. I’d love to grow old here in our lovely house, surrounded by family and good friends and neighbours.”

And her favourite hangouts?

“I like to exercise every morning, so I’m a member of the HIIT Factory in Yarraville and the Hobsons Bay Running Club. Going to Yarraville to the Sun Theatre is a great family outing. And a drink on a Saturday evening at the Junction is also fun – especially because it means we don’t even have to leave the block!”

Find out more about the project and purchase notebooks at: writetheworldnotebooks.org or Instagram @write_the_world_notebooks.