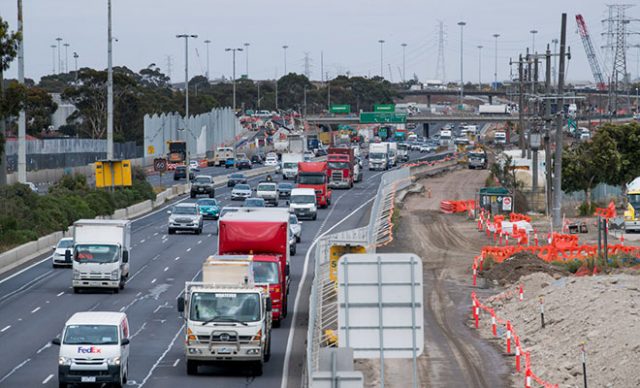 Works to widen the West Gate Freeway from 8 to 12 lanes as part of the West Gate Tunnel Project are ramping up, with a major traffic switch underway over the next few months to create a new worksite in the centre of the freeway.

A traffic switch is an essential element of the widening works, as it allows works to take place on each part of the road without having to permanently close the freeway.

To carry out the switch, lanes are shifted to the sides of the road, allowing works to take place on different parts of the road. Currently, the freeway has four lanes running in each direction, and once the project is complete there will be six through lanes in each direction.

The next phase, which started in late July, will see traffic moved further to outer edge of the freeway so that crews can create a new worksite in the centre to continue works to build the new tunnel portals and add extra lanes to the freeway.

Drivers will notice changes such as travelling on a new alignment, fresh pavement, and of course a brand-new worksite in the middle of the freeway.

During the switch, there will be no change to the number of lanes or speed limits, with four traffic lanes remaining in each direction and speed limits at 80km/h during peak periods.

Key works being carried out throughout the switch include removing the existing temporary barriers on the side of the road, asphalting and levelling the difference between existing and new pavement, line marking and installing new temporary barriers.

Drivers are encouraged to stay vigilant as they navigate the changed conditions and travel through construction zones – slow down and drive safely. And remember, even though sometimes you might not be able to see workers behind the barriers, they’re still there.

To carry out the traffic switch works, there will be overnight freeway, ramp and lane closures as well as some full weekend ramp closures.

Stay up to date by visiting bigbuild.vic.gov.au/disruptions for the latest info and detours.