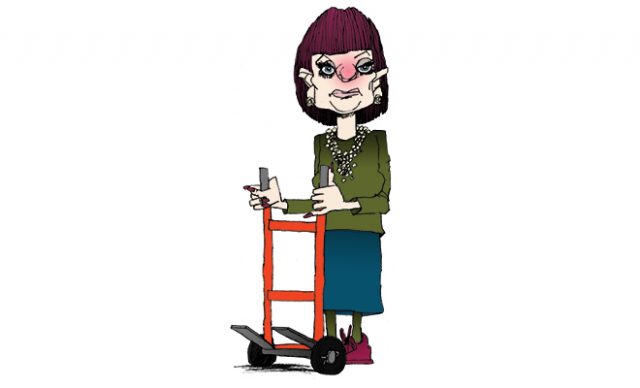 I was nine years old before I discovered that taking clothing from a store should be matched with a financial transaction of some kind.

Until then, my mother had selected items from the store’s racks for me and my sisters, dressed us in layers beneath the clothes we wore into the emporium, created a diversion, then quickly ushered us out.

I have four older sisters. Why it fell to me to attract the attention of the store workers with some wily misdirection while mum, Chrissie, Rob, Myra and Lindy-Lou implemented their business plan, was never made clear. Once their mission was complete, one of the Four Sisters of the Apocalypse would then push me into any handy, elaborate, store display. Through the din and the chaos of its collapse, I would see them vanish into the street as I tumbled to the floor surrounded by the wreckage of 56 Starter-Packs-of-Crockery-50%-Off-While-Stocks-Last!

Of course, no shoppie worth their entry-level pay cheque was going to allow the wails of a benighted nine-year-old interrupt the curated thought patterns of potential customers, so I was quickly frog-marched towards my ostentatiously anxious mother who, having reappeared sans filched goodies, was dispensing apologies to anyone who remotely looked like they could use one. If she ever saw any cracks appearing in her veracity, she would then begin to faff on about health and safety issues and wonder loudly what her lawyers [always plural] might think of this incident.

Of course, things did not always go to plan.

One cold, wet Friday, a sharp-eyed shop assistant, with a taste for the movie tickets awarded to the Employee of the Week, had a crack at bringing our little scam undone.

‘Hey, Michelin Man,’ she yelled at me.

She had noticed that the ill-fitting oversized coat that I had worn on the way in to the store, had somehow ballooned into a fitting, if not a tad undersized one on the way out.

Like smoke, Chrissie, Rob, Myra and Lindy-Lou disappeared. Mum tearfully implored the store manager not to call the police as threatened, because her son ‘had never done anything like this before’ and was probably ‘reacting to the sudden, recent and devastating loss of his father’.

This was a new wrinkle, but I liked where it was going.

It had been six years since my father was dragged before the courts and charged with ‘a comprehensive and systematic defrauding of the elderly and infirm, through a complex network of bogus accounting schemes’. It had earned him a four-year prison sentence.

Within days, he had escaped the low-security prison farm he was not-really-locked-up-in by using a complex network of fraudulent paperwork, that resulted in his creating a whole new identity for himself – an identity that remains a mystery to both the police and his abandoned family to this day.

Of course, he had left us destitute.

But my accusers were not to know that. So, an admonished and tearful lad was returned to his humiliated mother [not] with a stern lecture urging him [me] to mend his [my] ways and a suggestion to the fawning parent that perhaps membership of the boy scouts might put him [me] on the right path. It wouldn’t.

It was, however, true that dad’s vanishing act had inspired mum to veer from the straight and narrow and cut out all the red tape between ‘need’ and ‘ownership’. ‘Too many middlemen,’ she would proclaim as she set out on her new journey as a ‘shoppist’. She saw it as a ‘neo-liberal reform’ of the family – a term she had picked up from the Government of the day – and set about with some vigour implementing its philosophy of  ‘eliminating price controls, deregulating capital markets and lowering trade barriers’. Certainly, her interpretation of a laissez-faire economy was carefully cherry-picked, but she began to apply her version of it with gusto.

She had no brakes. She ‘shopped’ for new clothing, white goods, television sets and packaged food. Jewellery, garden plants and tools found their way into our lives. Once, mum managed to have three store assistants load a window-display lounge suite onto the tray of a ute, which she then ‘borrowed’, hot-wired and had me drive home. I was 12 years old.

Mum even worked out a way of diverting electricity from the factory two doors down to power our lighting and our fine array of kitchen appliances, entertainment centres, computers and assorted ‘home comforts’, for free.

These were profound life lessons.

While she was product rich, mum soon realised that some commitments required coin of the realm – utilities, streaming services, school fees and anything from the other side of the fence, ie. the weed supply she needed to ‘maintain an even keel’.  Enter the Warehouse of Hope.

Once our own modest needs had been met, mum embarked on a new business model. It was a hybrid of sorts. Charity store, in that products were acquired for free,meets hypermart, where these same products were retailed for 10% less than any ‘competitors’. Mum’s enterprise, however, was ‘cash only’. She thought, wisely, that plastic left too much spoor to
be trusted.

To maximise profits, overheads were driven into the ground by sidestepping any fussy regulatory demands, legal niceties were ignored and any need for fiscal rectitude was kept strictly below the parapet, especially when it came to a relationship with the Australian Tax Office.

Also, she only opened at night. Late at night.

Initially, the enterprise went well. But a honeypot like the Warehouse of Hope does not go unnoticed for long. The first ‘leaner’ to arrive with his hand out was Detective Sergeant Bryce Appleby [of course, not his real name – nobody named ‘Bryce’ ever made Sergeant!]. A nice flat screen TV, two iPhones and a sous vide kit bought his silence. At least temporarily.

This transaction blindsided mum. High among the many things she despised in human nature was the greedy bully. But Appleby’s stand-over job had come at her so fast, she had to buy some thinking time.

It was about to be resolved in an unexpected way.

Unbeknownst to mum, DS Appleby was indebted to local bikie capo, Nitric O’Nitric. A wildlife smuggling scam had gone horribly wrong and Mr Nitric laid the blame at DS Appleby’s door. Because that’s where it belonged. So rather than endure a reduction in the number of the fingers he deployed to daily pluck cash ‘donations’ from the hapless wide boys he blackmailed, Bryce traded off this useful tidbit of intelligence with his nemesis in lieu of other reparations.

The following night, Nitric O’Nitric arrived at the Warehouse of Hope with nine henchmen, each riding a very loud motorcycle.

When opportunity knocks, mum doesn’t take a backward step. She was firm with Mr O’Nitric, as she called him. She reminded him of his own errant ways, without any evidence may I add, and threatened to wash his mouth out when he sprayed a thesaurus of juicy obscenities about the place.

The unease amongst his colleagues was palpable. None had dismounted their iron horses. Perhaps the proto-mother performance had reached down into some primordial instinct and paralysed them. Perhaps none wanted to humiliate themselves in front of the tribe by inviting a verbal slap from this slip of a woman. Perhaps they recognised in her some of their own modus operandi.

Mum invited Mr O’Nitric to join her in a cuppa and nice piece of cake. This unlikely couple strode through the Warehouse of Hope as startled customers edged towards the exits.

The summit lasted for an hour. Their silhouettes could be seen through the grimy windows of mum’s ‘office’ as she paced about, occasionally finger-stabbing the considerable chest of a seated Mr O’Nitric. Laughter eased its way into this encounter until by the hour’s end an accommodation had clearly been reached, if the two shadows’ lingering hugs could be any guide.

The duo exited mum’s office, faces writ with grins. Mr O’Nitric ostentatiously made way for her with a theatrically poncey bow – an act of faux gallantry that she immediately rejected, pushing the man mountain ahead of her, inciting gales of laughter from both. This display made my 14-year-old mind uneasy for reasons I could not articulate.

I was not alone. Mr O’Nitric’s compadres were patently skittish. Stabby, intermittent engine revvings said much.

Our instincts were correct. This alliance announced a formidable pairing that was going to have ramifications none of us could possibly have anticipated.

THE MEANINGS OF THINGS #20