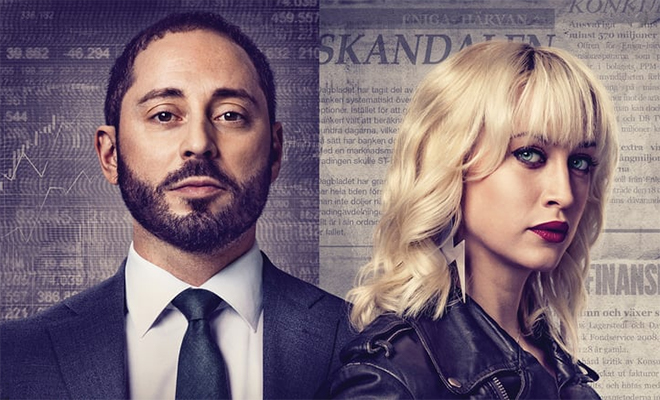 There are none so blind as those who will not see. Fartblinda, as the Swedes would have it [snigger], is a pacey eight-parter streaming on SBS On Demand pitting the fourth estate against Big Banking.

We all know [thanks to our own Royal Commission] that banks are peopled by sly-groggers, chancers, grifters, weasels, top-end scammers and conmen.

But it is no match for ambitious [yet, sultry] finance journo Bea Farkas who is on to them. Toss in the affair she is having with the Bank’s CEO; the Head of Trading who is a villainous-self-indulgent-genius-loose cannon; Bea’s longtime gay friend who has access to the Bank’s secrets; a menacing old-school owner, dripping with entitlement, who has direct methods of dealing with any roadblocks to the Bank’s success; Bea’s editor, crippled by the cold realisation that his best days as a Lothario are behind him; and a highly-regarded fellow scribe who is not afraid of the odd shortcut to getting his own nest nicely feathered, and you’ve got tension aplenty.

Here we have the Big Bad Bank trope sliding through the cracks in the 21st century finance industry – well realised in a low-key EU kind of way [with the occasional echo of mad US Billions mayhem]– up against a media organisation finding out where the booby traps are in the new[ish] digital world, all eyeballed by a hapless Government watchdog tethered on the sidelines by incompetence. All this shot in the brooding shadows and half light of ambition, greed and self-interest.

The crumbling marriage of Peder Rooth is a fairly standard plot point, but this viewer could not help wondering whether the surnames of the two main characters was a somewhat perversely knowing wink at hee-hawing English speakers…

Still, smutty innuendo aside, this is a class act performed by the best Sweden has to offer, and while it succumbs to the inevitable last ep signalling of another-series-to-come, it is worth the time investment. And it’s free

TOP 3 MOVIES TO REVISIT IN ISO