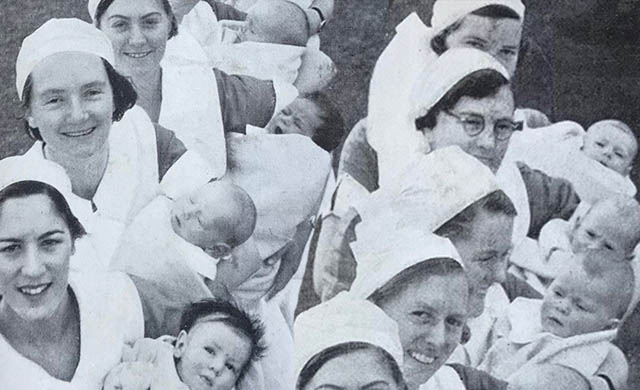 Tweddle, (often mistakenly referred to as TwEEdle), has been synonymous with Footscray and babies since the building of the Baby Hospital began over the road from Whitten Oval (formerly Western Oval) in the early 1920s.

The iconic Footscray Early Parenting Centre owes its existence to four pioneering individuals. Together they shared a desire to arrest the burgeoning rates of infant mortality devastating Victorian families.

Tweddle evolved following the establishment in 1920 of The Society for the Health of Women and Children of Victoria (Plunket System). The Society was funded by businessman Joseph Tweddle and introduced the New Zealand based Plunket system of mothercraft.

To finance their vision, Mr Joseph Thornton Tweddle donated £3000 pounds to start building operations with a guaranteed overdraft up to £7000 pounds. In 1922 a 15-year lease was granted by the Footscray Council to the Society for the Health of Women and Children for land on the corner of Gordon and Barkly Streets, Footscray.

On March 10 1924, the Tweddle Hospital for Babies and the School of Mothercraft was officially opened by the Countess of Stradbroke. The new nurses’ home and Matron’s cottage site on Crown Land was reserved for The Tweddle Baby Hospital on the 12th April 1961. Pivotal to Tweddle’s ongoing operations included the involvement and support of the Angliss Family.

Tweddle now operates from Adelaide and Sydney Streets Footscray. The original Tweddle Baby Hospital site on the corner of Gordon and Barkly Street is now a separately owned childcare centre.

Throughout recent decades, Tweddle has continued the legacy of caring for vulnerable families, often when they are exhausted and desperate for help.

Thankfully, 1939 Tweddle baby Jim Hevey, has helped to research Tweddle’s history which is now documented on the www.tweddlecentenary.org.au website.

You can visit Tweddle’s website and become a friend of Tweddle by donating to the foundation at www.tweddle.org.au/get-involved/donate. There are also parenting resources, program information and links to Tweddle’s social platforms and videos.