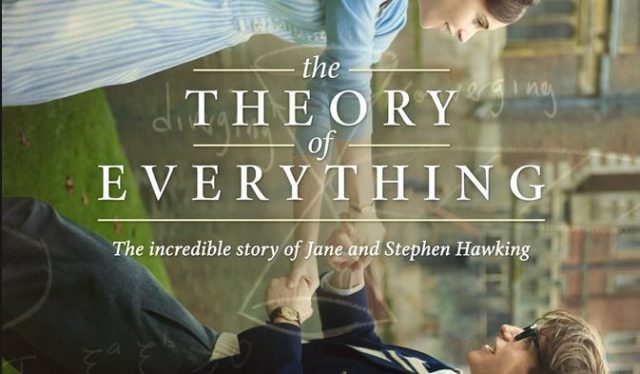 This film is as much about Stephen Hawking’s romantic relationships as it is about motor neurone disease. We see Hawking as a young healthy man – on the one hand, a pale, nerdy physics student at a prestigious college in Britain and  on the other, seriously sexy! He’s smart, funny, knows who is and even more, what he wants. He pursues an arts student called Jane and takes her to a ball – insert a stunning fireworks scene and some old fashioned dancing on a bridge – and they’re such a beautiful couple that the scene where he falls and receives a bleak diagnosis packs an extra punch.

Hawking is told he has two years to live, but he fights on, largely with Jane’s determination. They marry, have two children and work together, conventionally to begin with, before a twist I’d never have expected.

The film is visually beautiful, but its real achievement is the way it shows the intimate and romantic life of Hawking and his wife, amid the assumptions we might make about disabled people and perhaps even off-the-charts smart people.

Hawking is an extraordinary character and his early life makes for a good story.