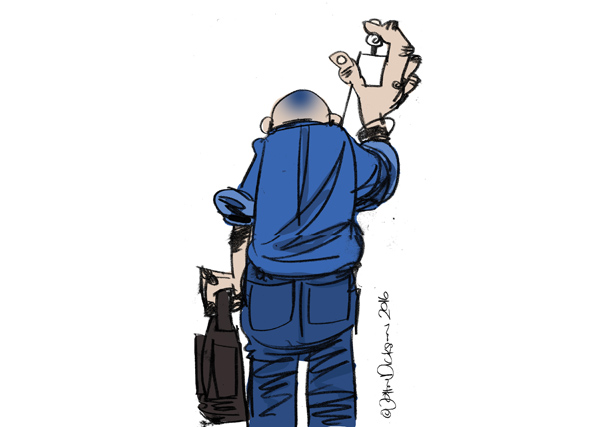 It was the indigo fade from fingertip to wrist and chin to forehead that gave me away – a colour favoured by banknote printers, stock certificate designers and tattoo artists.

I had visited Dr Humiliation* in Williamstown for my 40,000k checkup, and he had kept me back with an intriguing story about a man, not unlike me, who had a propensity for consuming liver-crippling draughts of old grape juice, not dissimilar to myself, but he had suffered early onset impotence, bloat and sadness.

Late aboard the 10.32am to Flinders St, I was busily humming this bad news from my cluttered head, and voraciously consuming the view of the parade of pristine stations on the Willie line. Just before Trainum Soporificus took out my consciousness, the distinct lack of graf on the gentrified walls ripping by, crept across my rowdy business.

Until Footscray made its presence felt.

That Footscray is the Mexican border of graf was apparent, then reinforced by Marge and Faye* who had plonked down opposite and begun their knitting. The clack of needles, the clop of loose dentures and the cluck of conversation, added to my misery.

‘What is wrong with these people?’ asked Marge, pointing a loaded needle at a wall of tags and word graf, designs stolen from 60s psychedelic art – gaudy, swollen, tumescent lettering with indifferent shading and poor perspective, illegible in its failed attempt to announce that Flies Is Here Too. Or something.

Then Faye said this: ‘Reminds me of two-year-olds smearing their stuff on bathroom walls.’ Cue eye-watering bout of terminal sniggers.

What!? Stuff!? How did it get to this? While a dark corner of my withering soul was applauding this insight, my teenage self was seething with misplaced, immature and careless rebellion. I would show these biddies that graf could still deploy wit, could still disrupt the urban grey with casual wisdom and could still, charmingly, illustrate homo sapiens’ foibles.

Mine would be a simple stencil, in an elegantly cut font, resembling a crayon on a toilet wall. I would cut it in secret; I would build my audience; I would have a punch line.

I gathered the necessaries and stashed them in The Shed. Jan was pleased to see me off the couch, away from the bottle and industrious in my new distraction. Allowing me space for what I called The New Me, she was clearly secretly pleased that my inevitable early evening snorefest no longer disrupted her enjoyment of the Enlightenment of Reality Television Shows, she refused to admit that she watched.

The first stencil would simply say, ‘I like grils’. This I achieved after some learning difficulties were overcome, and while it didn’t in any way resemble the crayon markings I dreamed of, it was legible and certainly attractive in its own wonky way.

I had already decided on a white wall on Seddon Station and determined I would dress in the blues of a train driver – workpants, black blunnies, work shirt with rolled sleeves and a black backpack [what is in those backpacks?]. What better disguise?

The second stencil benefitted from the craft lessons learned, and while more words, came to fruition much more quickly. It said ‘Don’t you mean ‘girls’?’ This I would spray the following day, as my audience built and built. I could almost hear the applause.

And it was on the third night of sheddity that the whole scam unraveled. Before completing the final stencil, I madly decided on a test spray on the back of the shed door.

The first stencil went well. Yes, there was a little overspray, but that could be corrected in situ. I shook the can as crowds gathered in my febrile imagination, hungry for the next revelation. Nothing. I shook again and depressed the trigger. Everything! The trigger had stuck at the exact moment I lost control of the can, and its random antics soaked me down in the finest indigo enamel that money could buy.

No matter how I try, no explanation of this event can restore my dignity. Ask Jan.

The third stencil would have said: ‘What’s wrong with us grils?’

*Not their real names

BEWARE THE SLEEP OF REASON AND THE MONSTER IT PRODUCES