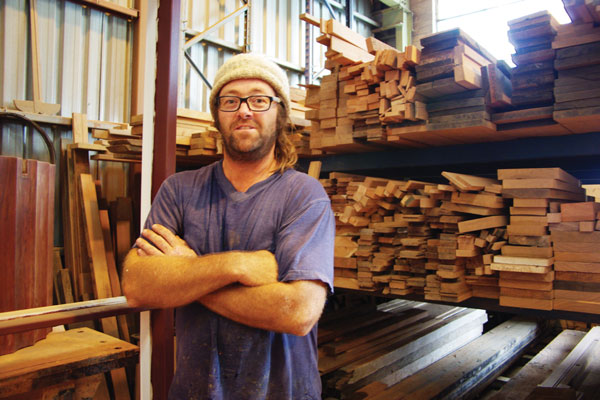 If you have ever travelled along Hyde St, Yarraville you may have seen the big wooden tugboat hull at Wharfside Workshops. This month I spoke with the owner, local Shipwright Drew Fay and listened to his story including his plans for the old boat.

“The plan was to bring it back to its original tug/tow boat configuration.  A guy I knew from around here sent us all sorts of history about where it was built and what it did. It was built by W.C Cone and Co in 1945 for the Ministry of Munitions. It was used in Hobart and then went up to Gladstone and Brisbane so it went all around the place. It finally ended up being stored by a guy in Bradmill (Yarraville) in one of the sheds.

Post denim factory Bradmill wasn’t operating as a business. The owners at the time leased out parts of the building and there were about 10 tenants there at the time. When Bradmill went to shut down, we were given notice, and I stupidly said yes to taking on the tug boat as a project. I  got it to here, did a bit of work on it, took all the copper sheathing off it, pulled all the old cotton out of the seams. I had to get to the planking and corking. It had been half way re-ribbed. I started taking out all the old iron fastenings, the old steel that was rusting. It needs a full restoration.

I trained as a Shipwright, my workplace was in east Gippsland and then I came to trade school just around the corner in Berry St Yarraville. They had a slipway on the Lakes, it’s still there, so we were able to pull boats in and out of the water and rebuild, repair and maintain all the boats on the Gippsland Lakes. I mainly worked on wooden boats but also sail boats, pleasure boats and fishing boats. We had a couple of barges and a work boat and we’d drag barges around the Lakes and build jetties, marinas and seawalls. You drive railway iron into the mud as part of it and then timber from there. We did big boat rebuilds that took over a year to complete. Boat building is specific but there are a lot of carpentry skills, ship carpentry and wharf carpentry which is all about jetties as well.

I worked with them for about 12 years, prior to that I was in Broome and prior to that I was travelling around a lot. I went to sea for a year prior to coming to Melbourne. I was going to start up a boat building shed in Gippsland when a guy who I source timber with to this day, had just pulled out Princes Pier in Port Melbourne. He then stored the timber at Bradmill and saw the carpenter’s shop and told me to come down and check it out. It was from there that I walked in and it looked like it had just been walked out of! I walked in and I just sort of switched it on and everything was fully functioning and there was nobody there. It had been sitting there for years unused, it was amazing! Basically it probably would have been one of the first buildings there because they would have then built the place from it. They used to build the factories around the workshops.

We used to sit around after work at Bradmill and talk about what conceptively we wanted to do. It was more a collaborative thing, it had a lot to do with re-sourcing and through demolition getting hold of timber, reusing it, up-cycling it. It’s because we were by the wharves, and we just came up with Wharfside Workshops. I’ve been here now for about 4 years after being based in Bradmills for 3 years.

We do whatever needs to be done in wood and there have been a number of people in that collaborative vein, everyone from the demo site up. I’ve done projects that span from higher end commercial all the way through to one off tables or custom built pieces. Commercial offices, restaurants, bars and cafes. I work pretty closely with a number of Architects in Melbourne.  We did Harry and Frankie’s in Port Melbourne, St. Ali south and north and Magic Mountain with Camillo Ippoliti. In St. Ali for example we did all the benches all the tables all the banquettes (seating), we specialise in seating, all the up stands, to counter and bar tops.

There’s an initial design and concept stage that we’re also a really big part of now. That took a while to sort of grow really. Initially you just do what you’re given but as time went by we really wanted to have more of a say in conceptualising or designing what we were doing.  The Architects we work with realised after time that was wise as well. That’s been a really good part of the business. I’ve got a guy I work with here, Don who is a master furniture maker, there’s people that I collaborate with and draw on, and he’s taken a more of a consultancy angle now and that feeds that conceptual part of the business.

It’s all mine but it’s also a lot of other peoples. It’s been important because I came in as a Shipwright as well and I didn’t want to pretend I was a fine furniture maker but I did draw on and was able to collaborate with people that are now mainstay.

I’ve got Toby up here at the moment (pointing to the mezzanine) who’s a young furniture designer and maker and he comes in now and sort of watches from up high and we knock and bounce off each other. He gets a lot out of watching us work and I do a lot of machining for his projects.

Another guy in the front room was into metal working, I had another woman here who was more into the design end of stuff, there’s been a lot of different people come through, it’s kind of like an artist’s studio. Whatever comes our way we can do it.

There are a lot of challenges but the further you look and the more open you are to finding expertise, the more apparent it becomes. If you can somehow get into that early stage design you can also presume what would be the optimum way of approaching something. We did some parquetry up stands in Harry and Frankie’s that were way outside of my expertise but we were able to frame and install them and we sourced someone to do the parquetry. It opens the whole world up to you.

Sometimes you really have to scale back to a point where it’s almost like re-learning. Being able to set and run a workshop properly. You’ve got to build jigs to make components for a certain application; you’ve got to make the workshop work properly.  I’ve learnt a lot around systemising, it comes back to that same old trade ethic where you make the pattern that makes the product. You can’t go the other way round you have to do it that way. And I’ve had the people around me to help me as well, that same sort of mindset, which is great to be around because to watch that high end workmanship, you learn a lot.

I’m not making jetties and marinas anymore, but watching all these timbers come back from them, it’s really cyclical. We used to sit around at Bradmill and draw up the cycle from the tree to its first to its second life. I still really like to get involved in things like a replanting program so it’s got this sort of momentum, so it doesn’t just stop, things don’t get trashed or burnt, things get built again and it also gives another tree a chance.  You could cut down trees but you’d want to be doing it ethically. A lot of the mills I work with are standardised, I’d sooner work with a company that’s got the right ethical approach than not. It’s an important part of our overall concept.

I’ve actually never had to advertise, I’ve never had to get a website, I don’t have Facebook, and I’ve never had to go looking for work. I’ve come very close heaps of times but I’ve never had to do it. Not that I wouldn’t, I’ve just been lucky, things just come, people come back or new people find out about us and I seem to be able to keep my head above water. I’m only here 10 days a fortnight. This business will never make me rich but it’s what I do for my living.

The 4 days I’m back at home (Gippsland) looking after my daughter, getting her to school, making lunches and jumping in the water. I’m also extending my house that I built 10 years ago up there. As a result, 10 days stretches here (in the workshop) are inhibitive to making money. I don’t employ people; I pull people in when I need them. A lot of the time I’m just making stuff myself or with one or two other people around. It’s not a big operation by any means, it’s not a big movement, it’s just a lifestyle really. I like being here; I have the radio on, catch up with friends and have a beer after work with people and talk timber. Toby comes in, Don’s in and out of the workshop all the time.

One thing I’ve learnt over the years is that you don’t pick it up and put it down more than twice. With timber you’re picking things up that are heavy and your turning them from something that’s nasty and heavy and has the potential to ruin both your machines and body, so systemise your thought process, optimise what you’re doing with the stock, optimise the people around you, make sure they’re on the same page and pick it up and put it down once and then you don’t have to do it again and it’s not going to cost you money.

There is a lot of time when you could be making money in the workshop and your picking stuff up and putting stuff down, moving stuff around that you put somewhere that you shouldn’t have. Everyone does it I think. Taking on bigger projects, project managing things because there are so many facets to it. Over time you learn to do things efficiently. As far as the tug boats concerned, I’d need to put a good few months and a lot of money into it. At the moment it’s sitting idle but who knows, it might become something else.