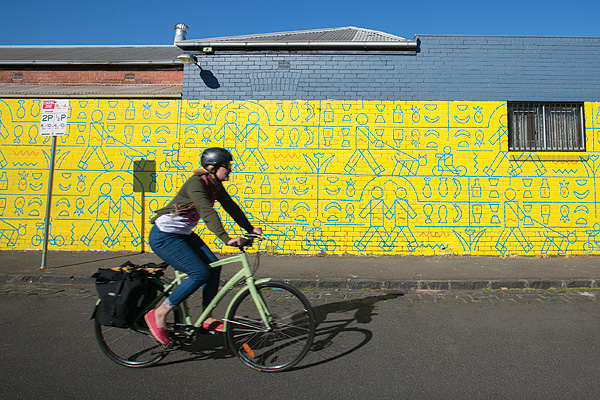 Different forms of street art have graced the surface of Footscray and surrounding suburbs for many years. Quite often it has been garish tagging or illegitimate markings on public and private buildings, however we are beginning to witness a transformation in the culture of street art in the inner west. Large paste-ups by Baby Guerilla have attracted impromptu tours of the streets to seek out the artist’s wistful, floating works, whilst tagger-turned-street artist Nomad creates classically inspired paintings such as that on the side of Happy Maree in Yarraville (who also display works for sale by local street artists).

In 2014 the culture of street art in the inner west was given another boost by the Maribyrnong City Council program, StreetWORKS. The program brought new artists into the public eye, producing artworks to animate locations that had previously been graffiti-targeted.

Adding to the municipality’s already impressive oeuvre of street art, Footscray now has a striking representation of Bunjil by renowned artist Heesco, a portrait of Uncle Larry Walsh overlooking the Maribyrnong River by Daniela Rodriquez, and Brett Ashby reflected on the cultural diversity of the West through layered stencils on a bridge abutment, just to name a few of the eight completed projects.

This year Maribyrnong City Council has committed another $40,000 to a second round of the StreetWORKS program, and six new public artworks will be unveiled.

“StreetWORKS is a winning program for our City. Our artists get to show off their wares, residents and visitors have great artworks to look at, mull over and debate, and graffiti and unsightly tagging has been reduced at the artworks’ locations. Our city truly takes creative expression to a new level,” said the Mayor of the City of Maribyrnong, Cr Nam Quach.

New artworks will be produced at sites including the Yarraville Village Store, the Asylum Seeker Resource Centre and Centrelink. These high profile locations have regularly been marked with tagging and unsightly graffiti. The second round of the StreetWORKS program aims to discourage unsightly graffiti and encourage conversation and creativity through the addition of street art.

The 2015 program also offers a unique opportunity for local businesses invited to provide their graffiti-affected public walls to StreetWORKS artists. The resulting collaboration will transform the surroundings and create positive connections between local artists, businesses, and the community.

The program will be delivered during February and March. More information about the StreetWORKS program is available on the website www.maribyrnong.vic.gov.au/streetworks or Facebook page www.facebook.com/streetworksmcc. Contact the Arts & Culture team on 9688 0200 for all other enquiries.