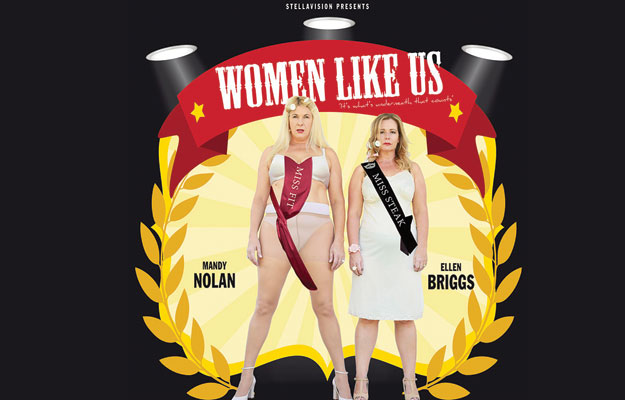 Local writer, performer, and event producer Stella Kinsella is launching a new and live podcast show, ‘Funny about Books’, at the Newport Bowls Club. With the regularly sold out Stellavision comedy night bringing the biggest names of Australian comedy to the inner west, Stella is adding even more entertainment to bill.

‘Funny about Books’ will be a live podcast recording held straight after the comedy show, with the audience invited to stay on and effectively see two shows for the price of one.

“It is an idea I’ve been wanting to get going for a while”, says Stella.

“A lot of comedians are published writers as well, and in recent months we’ve had Greg Fleet, Hung Le and Rod Quantock, who all write, do an interview and take questions from the audience after their performance. It’s been really well received, and Greg Fleet was especially honest and candid about his own story and writing.”

“Comedy performers like Shaun Micallef, Kitty Flanagan, Judith Lucy, Denise Scott, Dave O’Neill, Tony Martin, and so many more, have written some ripping books and we want to give our community a chance to hear more from these entertaining and very intelligent people.”

The author of three books herself, and being program director for WillyLitFest, Stella knows what readers and audiences want, and the new live podcast will be recorded and available in the days after each show.

“We’re bringing comedians and writers, as well as some who are in the process of writing and perhaps not yet published, to share with inner westies the story behind their stories, in a fresh, funny and raw way”, she says.

February guests: ‘Women Like Us’ Mandy Nolan and Ellen Briggs

Special guests for February’s comedy show, and the live podcast immediately after it, are middle-aged mouthy mamas of mirth, Mandy Nolan and Ellen Briggs.

The duo performed at the Newport Bowlo a couple of years ago during the Melbourne International Comedy Festival, and have gone on to perform more than 100 shows to a combined audience of around 20,000 people at festivals right around Australia.

‘Women Like Us’, a comedy show and book of the same name, started out as an idea from two women comics to step away from the male-dominated comedy scene and create where women’s stories and experiences are centre stage.

The show is two hours of stand-up comedy, an hour apiece by these powerful, no holds barred women. With seven children between them, they’re as adept at delivering laughs as they are at delivering babies, and the two solo stand ups are renowned for their rapid fire stand up.

“We want our comedy to demystify a lot of the garbage that we’re fed about being women” says Briggs.

“We tell everyday stories about our struggles, our failure to parent, the beauty industry, getting fatter, strange surgeries, obsessions, frustrations, and at the end of the day who unpacks the dishwasher”.

“At the same time, it’s not a show just for women, in the same way a comedy show by two men would never be seen as a ‘blokes only’ show.

“Women Like Us is about making our experiences universal. And as it turns out, there are a lot more women like us out there then we ever realised. There’s even a growing tribe of men like us too!”

Mandy Nolan is a columnist for the Byron Shire Echo, and writes regularly for Mamamia. She has appeared on ABC’s Q&A, SBS’s Mum’s The Word & About Women and is in demand as a corporate and club performer around the country.

Ellen Briggs is a national Finalist of RAW Comedy and winner of Foxtel Comedy Channel’s Be A Comedian.  The two women have well over 30 years of comedy experience between them, and have performed at the sold out ‘Up Front’ showcase at the Melbourne International Comedy Festival.

One reviewer said of them, “Two totally relatable ladies who hit the nail on the head of charismatic female comedy. Prepare yourself to be hunched over in hysterics!”

Mandy and Ellen are planning tours of New Zealand and the UK, so this will be their only Melbourne show for 2019. Don’t miss it!