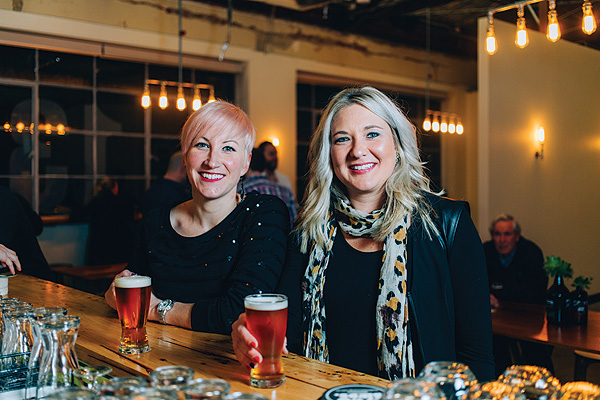 Danielle Allen and Jayne Lewis are Two Birds Brewing. Their first beer, the Golden Ale, took flight in October 2011. Now they are happily making beer on the Westside from their own brewery with a tasting room affectionately known as The Nest.

It all started with a trip to the US for these two friends, originally from Perth. Jayne had always wanted to have her own beer business and Danielle was also ready to start something of her own. Danielle runs the business side of things and Jayne is all about the brewing. They talked about some ideas and realised they had some great complementary skills. When they got home, they fleshed out a bit more of a business plan, presented it to their husbands and started working on it from there. June 2011 saw the start of Two Birds Brewing.

Initially they decided to put their focus on the marketing side of things and worked with a brewing facility in Geelong. This allowed them to concentrate on recipe development, establishing the brand and distribution before they had to worry about funding the construction of a brewery. As Jayne says, it “de-risked” the situation for them because they didn’t have to go ahead and outlay a lot of money to get going. They got the brand humming and then just over two years later they built their own brewery.

Jayne had studied wine making and growing, but really loves working with beer. She gets inspiration for her recipes from a variety of places – recipe development comes easily to her. She starts from the end and works backwards, working out how she wants the beer to taste, thinking about how alcoholic she wants it to be or how dry, and which characters she wants it to exhibit. She then tries to find the ingredients that will do that for her.

There are four beers in the core range, Golden Sunset, Sunset Ale, Bantam IPA and a special beer that’s available all year round called Taco. By popular demand Taco went from a one-off beer to a now-available-constantly beer. There is also a range of specialty beers depending on what’s happening and what they are feeling like.

Jayne and Danielle use Australian grown malt and have good relationships with Australian suppliers and hop growers, and are committed to using an Australian hop in each of the core beers that they plan from here forward. “We think that’s important to support those guys,” says Jayne. “A lot of our specialities have ingredients from overseas but we try to keep everything local where possible.”

Two Birds have been brewing in the West since June 2014, and they are going from strength to strength. The challenge is in continuing to find bars and bottle stores to sell their beer. There is only so much real estate that people have to deal with, whether that be a certain number of taps, a certain amount of fridge space, and obviously only a certain amount of ‘share of mouth’ at the end of all of that. Jayne describes it as a fight to get in there and a fight to stay there.

Relationship building with customers is essential and the tastings at The Nest help with that. These sessions are all about telling people about the company and the beers so that they understand more when they leave.

For Jayne, the brand and venue are about approachability. With Rockwell and Sons from Collingwood providing a changing menu of American-inspired goodness, The Nest is a great spot to go for a beer. You can sit out the back in the actual brewery amongst the stainless steel.

“We’d love people to come down and have a few beers. We want our beers to be ‘sessionable’ and easy drinking, with flavour and interest. The food caps it all off and makes it a great package. It goes really well with our beer. Good and robust, hearty and moreish. It makes you want to eat more and drink more and that’s got to be good.”

The Nest is open Thursday and Friday from 4pm, and Saturday and Sunday from midday. Tours run on Thursdays at 6pm, then on Saturdays and Sundays at 12 noon and 2 pm. $10 a head gives you a 45 mins – 1 hour tour, including a tasting session of the six beers on tap at the time. Bookings are essential through www.twobirdsbrewing.com.au

Jo is a freelance writer who wants to live in a world where apostrophes are used correctly and smiles are genuine. When she’s not scouring the Northside streets for the latest food craze, she likes getting lost in beautiful films and having wildly enthusiastic discussions with her friends.