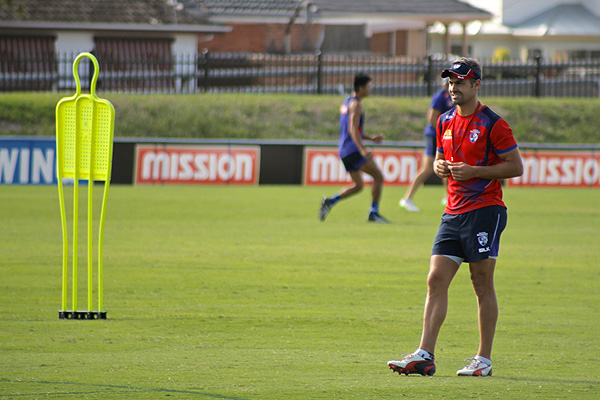 The Western Bulldogs star recently retired as an AFL player but is already making his mark as a coach. The Westsider recently caught up with ‘Gia’ at the Pound Café for this conversation.

Q: What appealed to you about coaching?

Q: As someone who just loves the game so much, do you think about it that far out?

DG: I’m one that is quite organised and I like to be prepared – I was throughout my whole career. The footy club and the AFL Players Association encourage you to do things outside of footy because they like that balance, so you are not thinking about the game too much. And because it was outside of footy, it stimulated my mind in a different way.

Q: You were considered a bit of an ‘on-field coach’ last year, how different does it feel being an ‘off-field’ coach

DG: It’s totally different, we’re not into games yet, but in terms of training, because you aren’t out there with the boys you feel like you aren’t having such an impact. But I suppose that is where you do all your work, with teaching and in terms of vision and walkthroughs. But the beauty of the training track is that you can be out there with them, when the season starts I’ll be on level 2 in the coach’s box. I’ve been in there before but I’m sure it’ll be quite frustrating at times with things you can’t change.

Q: Have you caught yourself during match practice following the players back to the forward line after breaks instead of heading to the sidelines?

DG: Not at all, I definitely know that the playing side of it is finished. There are things that you think you can have an impact on as a player and it’s about getting the younger players and the players in my area to take ownership of that and to think about it.

Q: Did you consider playing on another year?

Nah knew it was time. I read the play pretty well when I was playing and I read the play now that I’m coaching, we’ve got a talented list and those guys have filled my role well. I didn’t want to hold anyone back by playing – I was happy to move into the coaching role.

Q: Were you offered any media roles?

DG: No there wasn’t, I was fairly focused on coaching. The way the deal was set up, it was planned a fair way out that I was going to be at the Bulldogs. We just had to determine the role. I enjoyed the media roles when I was playing, but I was set on coaching.

Q: It’s a young team that has shown it can compete against finals teams; do you see them being able to extend that this year for longer periods?

DG: We like to hope so, we’ve got a new coach and we’ll be doing things a bit differently than we have done in the previous 2-3 years. I like to think there’s gradual improvement, that they’ve matured, I think six times (last year) we’ve gone down by under 13 points, so they were in a lot of games, but with good experience comes being able to deal with those situations. We haven’t put a number on it but we would just like to compete and stay in games for a lot longer and hopefully win those games

Q: What non-physical skills do players need to possess in the modern game?

DG: Whether it was different from when I first started to now I’m not sure, but there’s definitely a mental aspect to the game that is very important. The mental sides is huge and can impact the physical demands of the game as well, being able to control what’s going on in your head – whether its disappointment or even success and dealing with that. It’s a pretty intense industry and there’s a lot of pressure on them, they are as young as 18 years old, being able to deal with that and moving forward is probably the biggest thing.

Q: Any particular young player you’re working with specifically to try and get them up to speed?

DG: As a coaching group we’ve got our areas that we have to work in terms of players and where they play. Chris Maple, development manager works mostly with the younger guys and Ash Hanson who’s our VFL coach, but if we see anything we pick it up. Naturally I’m going to gravitate towards those small half forwards or medium size forwards because I played in that area and think I can give them a few tips on how to go about it. I’m continuing working as I have done these last few years with like guys like Lachie Hunter, Luke Dahlhaus, Nathan Hrovat, Mitch Honeychurch – we got a few little ones there that have got lots of talent and I’m just trying to help them as much as I can.

DG: Probably the question I’ve been asked the most this summer, he’s fitted in really well, he’s a pretty mature kid for his age, we do have to remember that he is only at the start of his second year. It’s going to take a bit of time, but we are excited about the prospect that he’s going to be – not only in the short term but for the long term future of the footy club.

Q: I suppose that was a surprise for you as much as anybody?

DG: Yeah it was a big shock.

Q: The sub rules seem to change every year, do you guys feel like you are on top of how it’s going to play out in games yet or do you use the NAB cup to try things?

DG: Well the rotations have stayed the same so probably it’s going to be used the same way, but you’ve got to think outside the square, what might work in that role, I’ve played it a fair bit so hopefully I can add my two cents to the couching department’s decision when they are picking a sub, it’s really a hard position for a player to be in but you’d rather that than not be in the 22. So you’ve got to use it to your advantage, you’re probably disappointed when you’re first given the vest, but when you find out you’re going to be it, there’s ways to go about it and I think we’ll try to utilise it the best that we can.

Q: Do you look at the data from last year and go; ”well this team hasn’t managed it that well”, but then you look at Port Adelaide who always seem to have fresh legs at the end of a game.

DG: I suppose that’s personnel and balance in your team, do you go with too many talls or running players, the sub tends to be more of a running player. As the season goes along, yes teams will start looking at data – is a player more of an endurance athlete or a burst player, whether they’re 6 foot 5 or they’re 6 foot, you can still utilise them in that role.

Q: How did you get into footy?

DG: I started like all kids do, it was VicKick back then, now it’s Auskick, I started that when I was 5, just fell in love with the game, played my junior footy at Williamstown, then went through the ranks, played at the Western Jets and was lucky enough to get drafted to the Bulldogs and lived 10 minutes away. Stayed home with Mum and Dad for the first couple of years which was nice.

Q: Who did you barrack for as a kid?

DG: Hawks. Jumped on the bandwagon I think, late 80’s, they were going alright. Had a soft spot for the Bulldogs though because we used to come and watch games, even though we barracked for Hawthorn, we lived close to the ground.

Q: Outside the Bulldogs – top four predictions for 2015?

DG: Port Adelaide, Sydney, Hawthorn, Gold Coast. I think Gold Coast have got a lot of talent, before Ablett got injured last year they were in the top 4. Someone usually comes from outside the 8 and makes the top 4, so that’s the one I’ve picked.

Q: What would you have done if football hadn’t worked out the way it did?

Q: What’s some of your favourite hangouts in the West?

DG: We’re starting to get a lot of good cafés around here at the moment – Milking Station is good, Advieh, West 48 – there’s a couple there I’ve given a plug to!