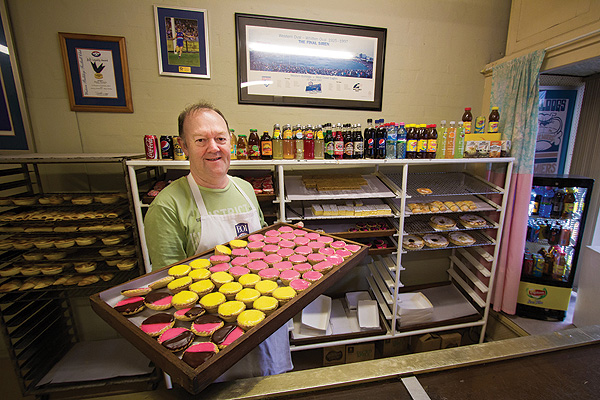 When I was ridiculously pregnant and enormous, I had daily cravings for Neenish Tarts. The pink and brown pattern would wake me in the middle of the night and I would stare at the ceiling, counting the hours until Heather Dell Cakes opened.

There’s something so charming about Heather Dell. It represents your nanna, through its sweet smell, its window display, its tin canisters on the shelves, the curried egg sandwiches, the biscuits and treats, the photos on the fridge, right down to the local fruit and veg supplier calendar with its perforated months highlighting birthdays, anniversaries and special events.

I like Keith Prentice as soon as I meet him. He creates all the brightly coloured sweet pastry treats that are all so carefully displayed on what look to be age-old racks behind the glass counter. He’s proud of his store and all that it represents. And he should be.

Keith’s grandparents opened Heather Dell in 1951. Back then it was just one store, not the double fronted shop you see today.  Keith discovered the art of pastry working for his grandparents and eventually became a qualified pastry chef. Forty years later, Keith is running the show.

“Our point of difference is that we stay.  We want to maintain the retro appeal, we have no plans to change us because that is who we are and who we’ve been for so long.”

Until I met Keith, I had only ever tried the Neenish tart from Heather Dell. However, upon this visit, Keith has introduced me to the wonderful world of pies.

I’m not a big pie eater. I have two brothers and watching them scoff pies after school while watching Degrassi was enough for me, but I give the classic steak, their most popular pie, a crack. And it’s bloody good.

Heather Dell is famous for their pies. Keith tells me that the government analysed their pies a few years back and it turns out there’s only 7.3 grams per 100 grams of fat in each pie.

“I challenge anyone to come up with a healthier pie in Australia. We are really proud of this fact. It’s hard when people now expect to pay around $6 for a pie. When they see $4.60 for a pie, they think it is going to be of less quality. I’m not going to change my values and make my pies $6.”

Where you will certainly get your $4.60 worth is by purchasing the Yarraville Pie, containing cracked pepper, cheese, tomato, steak, onion. It’s a treat, but you have to ask for it because it’s not listed on their display board. One certainly for the locals in the know.

Conscious eaters might also be interested to know that Heather Dell does not use any nuts in their cooking.

So what did Yarraville look like when Heather Dell first opened in 1951?

“Bob McNish had a shoe store, McNish’s, where Kawasake and Coffee Edge are now. Next door, where the blue window is, was a Greek cake shop. This was sold off to the guys who now run Alpha.

“My grandmother had the other half of this store and where we are standing now was an electrical store run by Kevin Tangy. Kevin then bought what is now the Village Store. Back then though, he opened an electrical and furniture store.

“The op shop used to be a hardware store and Barkly Johnson used to be a barber shop, the next store down was a ladies hairdresser.  Then there was a bank, an employment service, oh and the wonderful McPherson’s SSW – a huge supermarket chain. “

I ask Keith about other classic Yarraville stores that haven’t changed their values and he mentions the barber shop on Ballarat Street.

“It’s always been a barber shop, for as long as I can remember, just different owners.  I used to go there as a boy. I even remember buying an air rifle off the barber. A slug gun sounds less dramatic! But yes, some things around here have changed, but then again some things haven’t. We’re very lucky to be in this community.”

I leave the shop armed with goodies for lunch including Keith’s most favourite items: Swiss Pineapple and Swiss Blueberry. These two treats are so deliciously sweet, my son and I don’t sleep for the rest of the day. We’re on a Heather Dell High.

Perhaps Heather Dell is Yarraville’s answer to Willi Wonka’s Chocolate Factory? As long as Keith’s cooking up pastries in the kitchen, we can be promised plenty of old-school pies and sweets for years to come.

Heather Dell Cakes is at 7 Anderson Street, Yarraville. Look out for the sweet styled window display, but the smell of bakery delights will entice you in. Open Monday to Saturday. Try the Neenish.