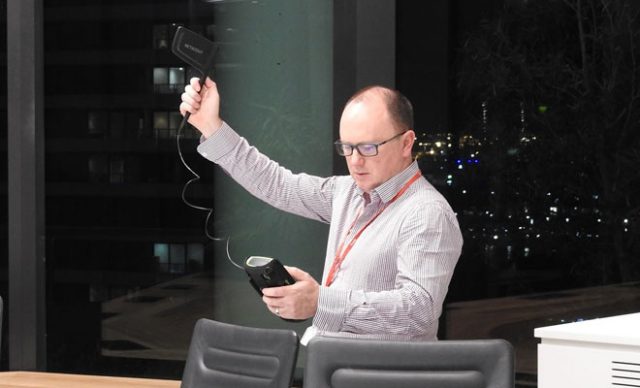 An ongoing series exploring unusual careers in the inner-west of Melbourne by Belle Hann.

In the darkness of night, they sneak into an empty corporate office. They are here on a top-secret mission: to help companies find out if they are being “bugged” ie being spied on through technical surveillance.

Every “bug sweeping” project is an intensely thorough – and very physical – process. The team checks each square inch, from the floorboards to the ceiling tiles, for anything suspicious. For example, a hostile competitor could steal valuable trade secrets with a hidden listening device, disguised as a book, in the corporate boardroom.

Only after hours of these forensically detailed procedures does Alan’s team feel confident to seal rooms with a slice of tape on the doors. This tape indicates the room is indeed safe from all surveillance.

This is an average night’s work in the life of Alan Earl, the principal of the Australian Bug Detection Group. Based in Yarraville, he travels across Australia to help individuals and businesses find out if they are being “bugged.” It is a demanding job that requires high levels of expertise, state-of-the-art equipment as well as strong professionalism. And no loose-lips either, due to the sensitive nature of the work.

How did Alan find himself in this type of career? He worked for years in various engineering fields, including a stint in the Reserve Army in the UK. But the dot-com crash led him to contemplate a new career direction, as did the book “Feel the Fear and Do It Anyway.”

Alan initially began a career in private investigating (he admits he once had the “romantic idea of the spy.”) However, he had a growing interest in offering “bug sweeping” services. As there are no official courses in Technical Surveillance Counter Measures (TSCM) in Australia, Alan became highly trained by studying in the United States. “It really opened my eyes to what the threats are.”

“Technology has caught up with the real world,” he says. “You can now buy a listening device for twenty dollars on ebay that can operate on a 4G network.”

In addition to high-level corporate clients, Alan says that private individuals are a significant part of his business. For example, there are growing concerns about technical abuse in domestic violence situations. “One big thing is the mobile phone,” he says. Spyware can be easily injected into the victim’s phone, giving the perpetrators access to their GPS, camera, social media, and other sensitive data. Alan offers a specialist analysis to detect any nefarious activity by third parties.

I have to ask: Are any of his clients, well, just a bit paranoid?

“Paranoid is a strong word.” He says, “Every client has their own story. We provide peace of mind.”