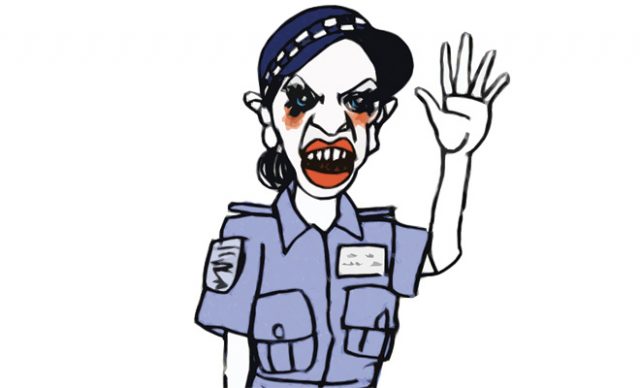 Last time we learned that Pria Kristen was perhaps not quite the cleanskin he previously presented as. His exile from his native Indonesia appears to have been some sort of punishment inflicted by his embarrassed father, the Minister for the Interior of that clutter of islands. By some unearthly coincidence, Roger Alan McKeever and his putative lover, the Irish-accented Tongan, Fatso, were at the centre of this humiliation. Kristen, McKeever and Fatso are now the subjects of a perverse reunion in the Church of the Mighty [War Against Satan HQ!! ], though none are aware of it …yet. McKeever remains unconscious at Kristen’s feet having rushed the stunt preacher when offered what he believed to be The Lord’s Forgiveness for his myriad sins in perpetuity – now and ever after! What a deal! For his part, Kristen’s aching arm is trying to remind him of how and by whom it was broken. [For those who missed the early episodes, McKeever had separated Kristen’s left ulna from its humerus when the coked-up entitled Indonesian had questioned the big man’s role as ‘entry co-ordination agent’ on the door of Jakarta’s Best Boogey Baby Boom Room nightclub.] In church leader Brother Jimmy Master’s private retreat, Fatso has discovered a series of lockers dressed in deep, deep, blackhole black, rendering them almost invisible. Masters remains unconscious, conveniently sidelined by the author tooling around at playing God while Fatso goes about his core business of relieving the Church of the Mighty [War Against Satan HQ!! ]of its easter cash accumulation.

Masters’ erstwhile lover, Rosa Flow, had been arrested for driving her BMW M760Li xDrive [a gift from the besotted Masters] whilst a considerable amount of alcohol played havoc with her better judgement. Her subsequent escape from the pokey has left arresting Constables Might and Mayne with egg on faces and a career-threatening conundrum on their hands. Disguised as Constable Marina Flake, Rosa has disappeared into the night, shedding her identity like a second skin. Like Fatso, she is aware of the Church’s stash of loot and has plans of her own for it.

[The only player in this farce that has an overview of what is going on here is Detective Sergeant Bryan Paterson who is reviewing events leading up to the Great Easter Heist of the Church of the Mighty [War Against Satan HQ!! ] from his office in the future. He is not a reliable witness. Tasked with solving the crime that is about to happen, his colleagues don’t really care whether he does or not, just as long as he takes an inordinate amount of time in his investigations and remains out of their way. Unprofessional as ever, Paterson has fallen deeply into an unrequited bromance with McKeever. In his surly misogynistic way, he is pleased to see that Rosa Flow is once again in the frame. She was his pick for the villain of the piece and her capture had doused his parade. Her absconding has once more given him hope.]

Fatso senses that the lockers arrayed before him contain the fabled piles of cash squirrelled away by Masters, the masterful ecclesiastical flimflam man. His instincts are correct. However, the almost seamless surfaces of the doors reveal no easy access. This is sophisticated stuff. Again, Fatso’s innate criminal savvy warns him that a straight ahead assault would a), take too long, b), attract unwanted attention, and c), would probably be defeated by these cutting edge techno repositories anyway. Then he noticed a tiny cluster of pinholes in the shape of a crucifix in exactly the same place on each door. Clearly some kind of key is required here, but what and where to find it?

‘It’s mine!’ burbled Masters as he scrabbled towards consciousness in the next room, ‘All mine!’ Fatso padded to the doorway, senses on red alert, bowel threatening to empty. He watched as Masters slid sideways from his resting place earlier provided by an empathetic Fatso who had lifted him off the treasure chest over which he was splayed and propped him against the wall. As is the way with those who have abandoned sentience, Masters’ nervous system was occupied elsewhere, denying him the opportunity to prevent his head encountering the floor at speed. Goodnight sweet prince. Silence.

Fatso forced down a rising concern for Masters’ exposure to concussion while he searched his pockets for the elusive locker key, to no avail. What he did find was the fob that allowed keyless entry to Masters’ brand new Rolls Royce Phantom, parked just outside the door and glorying in the registration plate, I4MGD.

Constable Marina Flake [nee Rosa Flow] is legging it back towards the Church of the Mighty [War Against Satan HQ!!]. Her award-winning performance at the local nick was such an obfuscatory tour-de-force that the stout constabulary there had no real information about her. Even though her lack of a drivers licence had added to ‘Jane Doe’s’ growing charge sheet, it meant that the only way she could be identified was through the ownership of the BMW M760Li xDrive still parked in the plods’ compound. Knowing the vehicle was registered to a shelf company in the Seychelles allowed her a stifled giggle, but she was worldly enough to know that it wouldn’t be long before some eager flatfoot traced it back to the Church of the Mighty [War Against Satan HQ!!]. She would have to move quickly.

Across from where she stood, a young woman was fussing arms full of shopping from the opened rear of a nondescript SUV. ‘Can I help you?’ shouted a community-minded Constable Flake from the gateway of the unexceptional house. Well, yes, said the unremarkable resident of this featureless street, that would be appreciated. And that, boys and girls, was why the next day, Channel 10 showed a breathless, unidentified couple telling of how they liberated a young woman who had been locked in the bathroom of her uninspiring home, claiming she had been put there by a policewoman who also stole her car, wallet and some clothing.

Not Rosa Flow, not Marina Flake, now Petra Dieter was low-profile driving towards you-know-where, carefully mulling over a plan of attack and retrieval, ignorant of the chaos awaiting her there.

Big Ears, as Pria Kristen had fondly named him, was looking slightly addled as he tried to get to his feet. The earnest congregation of the Church of the Mighty [War Against Satan HQ!!] that had surrounded McKeever in keen collegiate concern, halted their prayers and backed away as this monolith drew himself to his considerable height. His massive hands waved at the air until a sympatico clapper realised McKeever was searching for his hat and reunited it with his head. Order was restored. The congregants were solicitous towards the big man in the manner of supplicants slightly astonished that their entreaties to the deity for a modest miracle had allowed them witness to McKeever’s conversion and healing. When advised by Pria that this represented the end of the day’s gathering, many shook his hand with a lingering touch as if to try and absorb some of the electricity of his powerful connection with the almighty. Kristen made a mental note to wash his hands thoroughly as soon as possible.

The church band, The Lord’s Bop, had roadied their equipment out and the ushers had finished their cleaning duties, before departing. Pria was left with a dazed McKeever muttering something about a missing ‘Fatso’. Pria quickly realised that this was the Noddy to McKeever’s Big Ears and began to wonder just exactly where he was.

In the distance, Fatso could hear car doors slamming and the revving of engines as the ecstatic followers of the Church of the Mighty [War Against Satan HQ!!] set out for their homes, still fizzing from the events they had just witnessed. Dammit. He would have to find McKeever now before the search for the locker key could begin. Masters seemed happily in fairyland, at least for the next little while. Finally, Pria Kristen would also have to be accounted for and Fatso would prefer it if the pinch-hitter preacher would get to keep his consciousness. This donging of peoples’ heads just had to stop.

What Fatso had failed to account for was the impending arrival of a determined Rosa Flow/Marina Flake/Petra Dieter. Could this be his undoing? 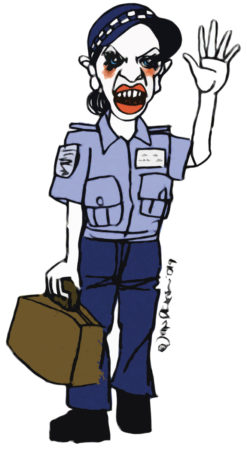 [A modest hop into the future and Constable Bryan Paterson is inches from the screen showing historical CCTV footage of The Day In Question, bursting with joy at the sight of his unrequited recovering from an ill-timed prostration at the feet of the migrant second-string pulpiter. So smitten is he with McKeever, he neglects the whereabouts of Masters and Fatso. Then, a second screen showing the emptying carpark of the Church of the Mighty [War Against Satan HQ!!] offers a jarring image. Against the flow of traffic, a bland SUV is finding a park next to the handsome Rolls Royce Phantom he knows belongs to Masters. The woman who alights from the vehicle looks familiar and Paterson’s compromised synapses switch to Defcon 4.]

For those who arrived late and for some reason wish to try and make sense of these scratchings, the first six installments can be found at thewestsider.com.au/tag/idlefoot/
Leave a note. Ask a question. Warning: it may not help.