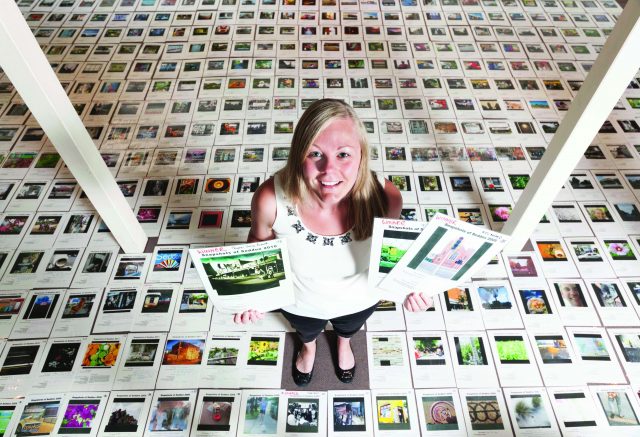 I meet with Katrina at Hollibones Funeral Directors on Victoria Street in Seddon where, with the help of the Seddon Community Group, she is preparing a pop-up gallery to re-launch the much loved Snapshots of Seddon photography competition at the Seddon Festival on March 5th. “I’m really looking forward to the entries this year, especially to see the different ways people will find to be creative and shoot the area from an interesting perspective.”

Katrina has been going through a mountain of old entries getting them ready for scanning so they can appear in an online archive gallery “One of the big changes for this year will be that entries are also going digital via our website. There will be an online gallery kept there as well as the usual physical street gallery for people to vote on.” There are photographs in her pile that date back a decade and after looking over them she says, “It’s great to be able to go back though the old entries and see how Seddon has changed over the years.”

Hollibones Funeral Directors are a sponsor of the festival this year and they have generously offered their centrally located chapel for the competition gallery launch. However, Katrina says the festival display is just there to kick things off, “The pop-up gallery will be great to give people inspiration for their entries”. The Seddon festival is the official opening date for the competition and after entries have closed, a small army of volunteers will mount the hundreds of entries in the windows around the Seddon village for viewing and voting.

The competition is open to anyone wishing to get involved. “You don’t need to be from the area to enter, you just need to take a photo of something in Seddon to be eligible.” One of the great things about this initiative is that it fosters inclusion from all members of the community and Katrina points out that “there will be community workshops to assist those wanting take their entries to a new level and learn more about photography”.

Come down and see the Snapshots team at this year’s Seddon Festival for all the details.

As seen on the front cover of this edition – Seddon local Katrina Mittermaier stands amongst some of the hundreds of past entries to the popular community photography competition.