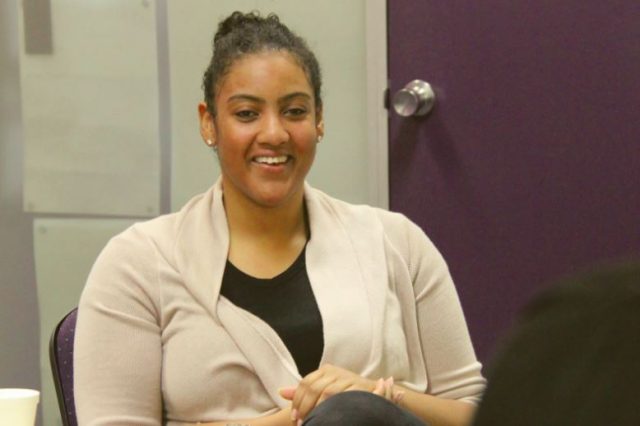 The Centre for Multicultural Youth (CMY) has spent more than 25 years supporting young refugees and migrants build better lives in Australia. When Footscray resident Monica Forson applied for a public speaking course, she didn’t realise it would lead to becoming an ambassador through CMY’s multicultural agency for public speakers, ShoutOUT.

In her capacity as a social worker Monica often speaks about multiculturalism and mental health and became involved in ShoutOUT through the Afro Australian Student Organisation, which she co-founded with the aim to link African students together to Australian institutions across Victoria.

“It’s really great because it’s the first type of agency of this kind – to actually have young multicultural people talk about what they are passionate about is really cool. Normally you get pigeonholed and say let’s talk about racism or asylum seekers which is important too, but an organisation like Shout OUT allows us to speak our mind.”

In the 1980s CEO of the CMY, Carmel Guerra, saw that there wasn’t the services for multicultural people or policy considerations that understood their distinct needs. Through the tireless efforts of Carmel and others and a couple of re-launches with more relevant purpose and definition, the result is the organisation we find today that provides some of this required support and case management. If a family has housing or health issues, they can help. They also handle referrals, policy development and work to build social cohesion in the community.

Monica reflected on some of her own experiences; “It’s easy to say that a young person should do this and that because someone has told you to, but that doesn’t take into account the cultural limitations of people. For example, my mother might say ‘you cannot go out at all’, but then the social worker would say ‘why not’? In Australian culture it is not a big deal.

When Maurice Blackburn lawyers stepped in to help Monica and the Afro-Australian Student Organisation, it was the first time a lot of her Africans colleagues had been to a big city building, looking out over the skyline. Maurice Blackburn were keen to employ African students, but generally progress is still slow in Australian business for many multicultural communities. It served to highlight some of the changes that are needed, and employment, leadership and community development are certainly three areas of continual focus.

Monica agrees; “It would be good to look at African faces or any nationality rather than all Anglo Saxon. If our community looks multicultural, why doesn’t our Australian workplace?”

A clear disconnect exists between the expectations and the needs of employers and the current abilities and habits of many multicultural groups, but should Anglo-Australia expect  these groups to make the majority of the changes or should business and employers also play a role in order to be able to continually employ people and contribute to the economy?.

Monica sees sense in a ‘meeting in the middle’ approach; “I think it’s on both levels. Sometimes I would hear my friends say ‘Oh it’s racism, I can’t get a job’ and some people have gone to change (anglicize) their names on their resume. So I do acknowledge there might be some discrimination when people are employing people, but I have also met others who have shown me their resume and they have nothing related to the job they’re applying for!”

But opportunities are starting to appear she added; “One girl took the initiative to speak with their HR staff and got an interview, she didn’t pass the English segment but they let her go to the final round. She didn’t get the job but it boosted her confidence because she had never got to that point in an interview before and I believe that she wouldn’t have got to that point without the Afro-Australian Student Organisation. Only a few weeks later, she applied at Slater and Gordon and she got the exact same job!”

The difficulties faced by multicultural youth don’t end at employment however. A recent mental health forum suggested that up to 50% of Somalian refugees have a mental health illness, often from trauma brought with them from their own war-torn country. This is similar to many other ethnic groups. Other cultural problems need to be dealt with appropriately – the concept of ‘African time’, clearer communication, and lack of English skills all need a degree of bridging.

If given the opportunity to make funding decisions, Monica’s vision is clear; “I feel like I would have a lot of youth consultation and find out what they actually want. Not everyone can come to Melbourne and these kids can’t catch the bus as their parents won’t let them, so we are missing out on that segment of people. Also getting professionals to come and speak to us and adding more networks. Putting money into leadership development and enabling people to access schools more easily, and just support for these kids would be great. Generally just programs that make us feel more included in society.

Monica too has had experience with some of the difficulties facing multicultural youth; “I’ve been filling up petrol and they asked me to pay beforehand even though the next person didn’t have to. I thought to myself ‘what is this?’ and was really in shock. Most people don’t know but I was born at Sunshine Hospital, so I have been in the west my whole life. I’m Australian but because I don’t visually look (Anglo) Australian doesn’t mean I should feel like I am not. Everyone looks different nowadays. Those sort of things gets you down.

Looking to the future, and Monica can’t help thinking of others who will come and also need assistance; “I went to Ghana two or three years ago with my father and sister as my grandma had just passed away. my dad introduced me to his friends and they were selling SIM cards for phones on the side of the road. It was no quality of life and it was really sad to see, that could have been my father. I understand now why my father came to Australia and why he insists on studying and puts pressure on me to develop myself further. In Ghana, you can’t do anything unless you have money and an education. That being said Ghana is a stable country and is very fortunate compared to other countries in the area.

Might Monica end up in Ghana herself, helping people there?

I’d like to go to Ghana, my big dream is to focus on mental health issues due to the fact that they are really badly handled. There are reports that people with bipolar and schizophrenia are chained to concrete, they then go to spiritual houses and locked up. They don’t understand mental health illnesses so I’d like to set up a proper mental health clinic, kind of like a nursing home where they get proper adequate care and are treated like humans, based on more Western ideologies. I wouldn’t push traditional medicines away but I think that a lot of people don’t have proper knowledge about mental health and it’s important to support them. When my grandma was sick she thought her uncle had put a spell on her.

For now it’s step by step for Monica – to continue speaking on behalf of ShoutOUT, completing her studies, and helping whomever and however she can; “I am a real advocate for volunteering, I volunteer more than I should and my dad keeps telling me to get a real job and earn money! But I genuinely enjoy making people happy and giving back to the community.”

Monica Forson is of Ghanaian and Australian descent and the former president of the Africa Club at the University of Melbourne. She is Co-Founder of the Afro-Australian Student Organisation. If you would like to engage a ShoutOUT speaker, go to www.cmy.net.au/shoutout