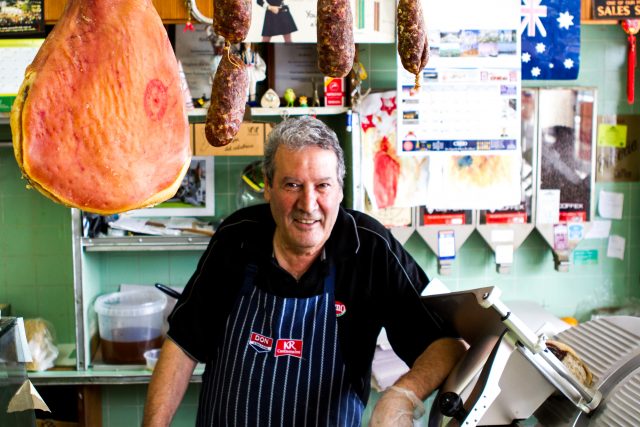 I’m greeted by a friendly ‘ciao’ when I enter Rocco’s Delicatessen. The store smells good, like a home cooked meal. Rocco smiles at me and there’s a definite twinkle in his eye. Everything about this place is familiar, like I have stepped back to a moment in my childhood.

Rocco and his wife Adriana opened their store in February 1977, 38 years ago. The store is full of reminders of the past, from the vintage signs behind the counter reminding you to purchase a TAB cola or how you can be a mod while smoking a Virginian Slim, to the family photos behind the register and the sound the door makes when you open it.

The neatly packed shelves, with all the product labels facing the front, feature ingredients I have never heard of or simply ones I just want to try. There’s a jar that looks like it contains Nutella but it’s in the shape of an ice cream glass. I want it. There are two laminated fridges at the rear filled with cheese and dairy. A small worn wooden step stool sits in the corner, waiting for the next stocktake. It’s funny, I stare at this stool for ages. It is loved and trusted. You would never see something so old yet so useful and reliable in a supermarket. I love it.

Rocco chats to me in-between serving customers. He is behind the deli counter, leaning next to the meat slicer. He is surrounded by hanging meats, wearing a full apron.

He tells me about his family: he has a son and a daughter, both are close to turning 40 and both live in Yarraville.

“My family in Italy were always in this kind of business, so it wasn’t too hard to start.”

“When we first opened the Deli there was a lot of Italian, Greek, Polish, Croatian, Macedonian, Lebanese living in the area. My shop on a Saturday morning would be a mixture of international languages.”

“There used to be a bank next door which is now apartments. There was a butcher a couple of doors down which is now a café, and a chemist, a fruit shop, and a nursery across the road.”

Adriana is serving customers at the other counter and she reminds us that there was also a hairdresser.

“The area has changed a lot. Twenty years or so ago, the rent was a lot cheaper: $70 a week to rent. Now you pay $500. This means the people have changed, the area has become younger. Like you.”

A door chime distracts Rocco and a man peeks into the store and asks Rocco when his sausages are coming in.
I asked the man what he likes about the sausages. He tells me he likes to take them out of their sack and have his way with them… mostly bolognaise.

I’m interested in the non-stop traffic of people coming in and grabbing a bread roll out of the large baskets on the floor and then handing it to Rocco.

“They’re called a Rocco Roll. Everything is in it: salami, ham, mushroom, pesto, eggplant, tomato, cheese. They are very popular.”
And he’s right. The whole time we are chatting there’s an endless stream of Rocco Roll orders.

While he’s making up the orders, I look at the vintage signage behind the counter. It’s so cool.

“This one here (he points to the 1960s Virginia Slims cigarette sign) was between the pasta shelves for fifty years. And a lady she comes and says ‘Rocco, what have you got there?’ I said a piece of cardboard. She says ‘no, no, no!’ And then, what happened there was she wanted to give me a $150 for it.”

“The Coca Cola sign was from the old fish and chips shop in Roberts Street. You know the one that has the big fish out the front.”
Stores like this are so rare. This one, in particular, is special. It’s a time capsule of the inner west, reflecting the past that seems so relevant to now.

I left the store with a Rocco Roll in my hand. I headed to the park and sat down in the shade and enjoyed a picnic with my deli treats. Sometimes it’s great to let time stand still.
__
Rocco’s Delicatessen is at 122 Roberts Street, Yarraville. You can pick up a Rocco’s Roll for just $5 and other Italian treats from Monday to Saturday.