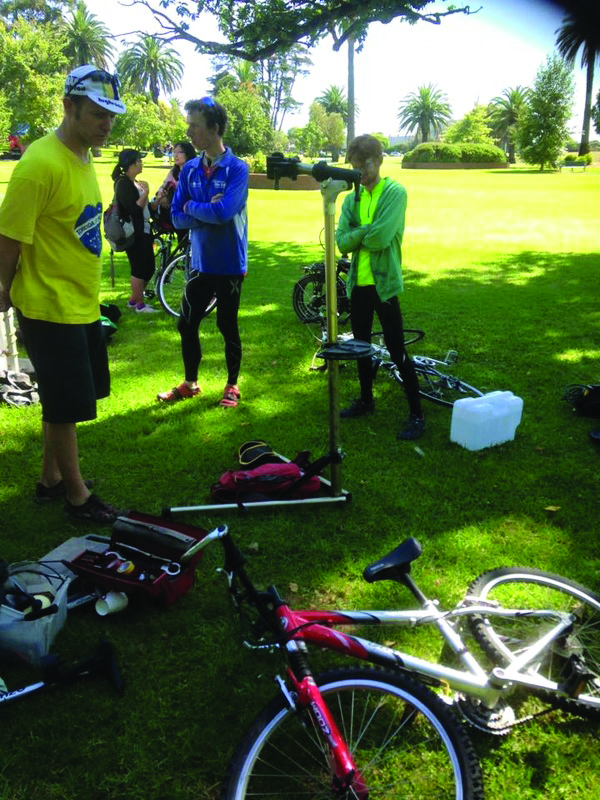 Melbourne’s inner west now has its own repair cafe, where people can bring along their broken items from home for volunteer fixers to fix, wherever possible, and where visitors get the chance to learn practical skills and have a go at fixing things themselves – all free of charge!

The “Melbourne Repair Cafe (Inner West)” launched this past Sunday (21 February) at the Living Future Festival in the Yarraville Gardens. Over a dozen volunteers were on hand to run workshops and talk to festival-goers about what they can expect at future repair sessions. Dean brought his guitar-fixing gear to the launch to repair bridges and broken strings – including a Moroccan banjo (sitir) he was presented with on the day and which he managed to fix! Howard, a mechanical fitter by trade, showed people how they can revitalise rusty tools. Sylvie, sitir owner and local artist, captivated both young and older visitors to talk about what goes into an essentials toolkit. Danny and Karen, from Reusers of Unloved Discarded Excess (RUDE), ran sessions on fixing garden hose connections, replacing three-point electrical cords, and doing basic clothing repairs and alterations. And Mick and John (the “bike whisperers”) were on hand to show cyclists how to fix and maintain their bikes.

The repair cafe concept started in the Netherlands in 2009 and, in 2010, the Repair Cafe Foundation (http://www.repaircafe.org) was set up to help other local groups wanting to start up their own repair cafe. The Melbourne Repair Cafe (Inner West) joins over 900 repair cafes around the world and is one of only four in Australia. The other three are at Albury-Wodonga, Marrickville and Mullumbimby in New South Wales.

The idea is to help put neighbours in touch with each other to discover and share practical skills close to home. Repairs can also save money and resources, and minimise what goes into landfill. Plus, as every kid who takes things apart can tell you, it’s just plain fun to be able to fix stuff!

The first in-cafe repair session will be held at Natasha’s cafe in Seddon on the first Sunday in March (the 6th) from 10am til noon. Rhubarb Wholefoods Cafe is located on the corner of Buckley and Victoria Streets.

Find out more about the Melbourne Repair Cafe, future repair sessions, and how to become a volunteer fixer by visiting http://www.melbournerepaircafe.org.

WHAT’S ON, EVENTS AND ACTIVITIES